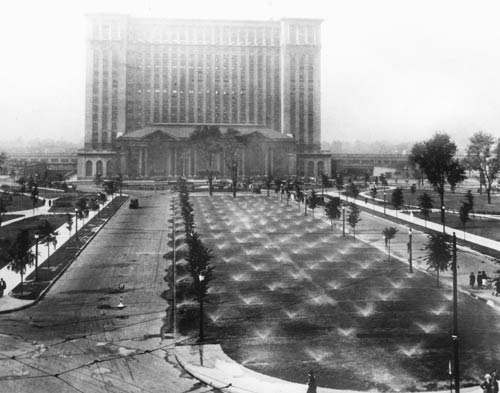 The introduction to Detroit’s Michigan Central Station says the Michigan Central Station was designed by Warren & Wetmore and Reed & Stem, the firms who were the architects of New York’s Grand Central Station. It opened in 1913, and by the time this 1921 photograph (above) was taken, the Beaux Art ideal had been reached. The unique road configuration leading up to the Michigan Central, as well as the fine ambiance Roosevelt Park contributed to the scene, reveals itself to be absolutely necessary to complete the designers’ vision. (Courtesy of Manning Brothers Historical Photographic Collection)

By 1967 the main waiting room (right, click for larger view) was closed to travelers and used merely for storage; it is difficult to conceive of these splendid benches being relegated to use as a mere shelving system. Hanging on by a thread, the Michigan Central continued to operate without its restaurant or even the main park entrance. (Dave Jordano, Courtesy of the Burton Historical Collection)

In case you’re wondering, here’s a photo of the waiting room in its current state and here’s another.

View other excerpts from Arcadia Publishing’s Michigan books at Michigan in Pictures and also be sure to check out MCS 7.2.7: Transformers co-star Michigan Central Station on Absolute Michigan for more photos and some great videos too!!