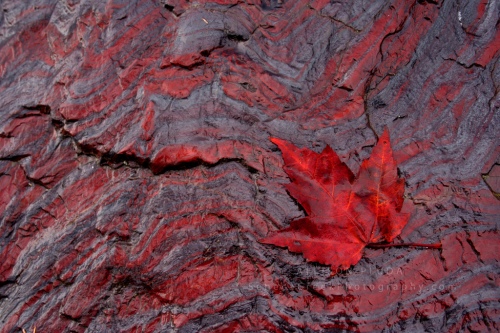 Alison writes that this formation is billions of years old and is the main evidence of showing when photosynthetic life first arrived on earth. This photo is part of her Fall set (slideshow) and you can order a copy online from Seneca Creek Photography.

UPDATE! Alison emailed me some great information that makes this a lot clearer!

The Banded Iron Formations (BIFs) are about 2 billion years old and are made of alternating layers of Magenetie (Fe3O4) or Hematite (Fe2O3) which are the grey shiny layers, and red layers of iron stained chert (SiO2) often called jasperite. This photo is part of the Negaunee Iron Formation. Fe2+ is soluble in water, but when iron is oxidized to Fe3+, it is insoluble in water and will precipiate and become a solid. So, the alternating layers represent Iron being oxidized, and precipitation out to form a red layer, and then iron not being oxidized so that you dont get precipitation and get a hematite layer. It is this cycle of there being oxic (oxygen present) and anoxic (no oxygen) conditions in the ocean that has scientists wondering how that could happen.

There are many models that have been put together of how this could happen, but the most interesting one says that ancient bacteria used to use iron as a nutrient. The first bacteria that photosynthesized on our planet produced oxygen, which could explain how the iron was oxidized, precipitated and formed the red layers. Some have said the layers represent the death and birth of algal blooms. Eventually, bacteria produced so much oxygen that all the iron was oxidized, and thus we don’t get BIFs forming in our oceans today since it is impossible to dissolve any iron in it. They even found bacteria in some of the BIFs in Minnesota!

-90% of the world’s BIF (>1014 tons of ore) is located in Australia (~ 27 tons), South Africa, Brazil, and the Lake Superior Region in the US and Canada. The iron that is mined in the UP is extracted from BIFs by grinding them to a powder, taking the iron out through magnets, adding bentonite clay, and then rolling it up into pellets more commonly known as taconite pellets.

She adds that she has some journals about these she would be glad to send to anyone interested, as she have done some research on these as well. Contact her through her web site!

Read more about banded iron formations, fossils in the Negaunee Iron Formation, Jasper Knob and cool spots for rock collecting in the Eastern UP.

Here’s a link to more or less the location of Jasper Hill (Jasper Knob) on the Absolute Michigan map!

11 thoughts on “Banded Iron Formation at Jasper Knob in Michigan”