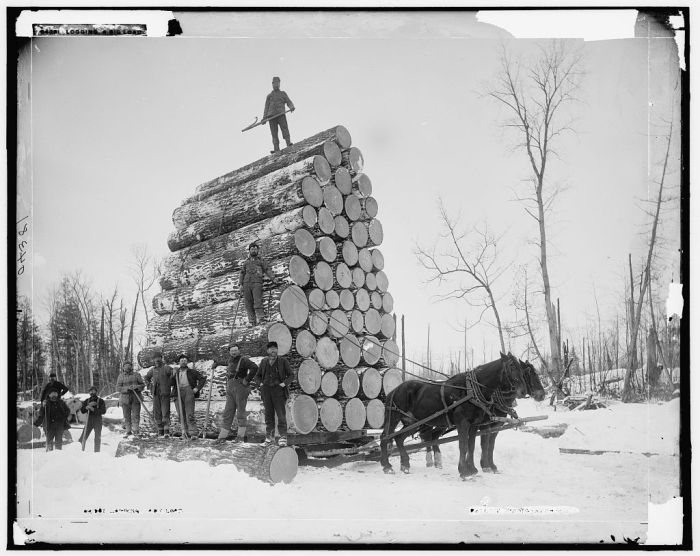 The above photo was taken somewhere in Michigan in the late 1800s. Click to view it bigger.

Once upon a time, much of the state of Michigan was covered by a vast, white pine forest.  If you want to get a taste of what old growth pines were like, and also a very cool logging camp, consider a trip to Hartwick Pines.

Seeking Michigan has a great feature about Life in a Logging Camp that includes some cool photos. It begins:

In the 1840s, Eastern states were beginning to exhaust their timber resources, and information about Michigan pine began to spread. Lumbermen began flocking to the Great Lakes State. According to George S. May’s revised edition of Willis Dunbar’s Michigan: A History of the Wolverine State, Michigan’s lumber boom peaked around 1880. Dunbar and May also note that lower peninsula forests were “virtually all cutover” by 1900 and that Upper Peninsula lumber production began to decline a few years after that. Conservation techniques and selective cutting increased productivity later in the twentieth century. By then, however, the “hey day” of the lumber industry was unquestionably over.

The Nature of a Logging Camp

For much of its history, logging was a winter activity. In winter, logs could be easily transported to river banks via bob sleds (or, in later years, by railroad.). In spring, when the ice melted, logs were floated down the river to saw mills. Log marks (the logging equivalent of “cattle brands”) determined ownership. Due to the seasonal nature of the business, logging camps tended to be temporary.

In “Michigan’s White Pine Era, 1840-1900” (Michigan History vol. 43, December 1959), Rolland H. Maybee describes a typical Michigan lumber camp, circa 1875-1900. Many camps of this era accommodated sixty to one hundred men. Typically, there would be five or six main buildings, all made of logs. A bunkhouse, a cookshanty, a barn, a blacksmith shop, and a camp office and store would be among the buildings. The camp office and store typically included living quarters for the foreman and log scaler.

Read on at Seeking Michigan!