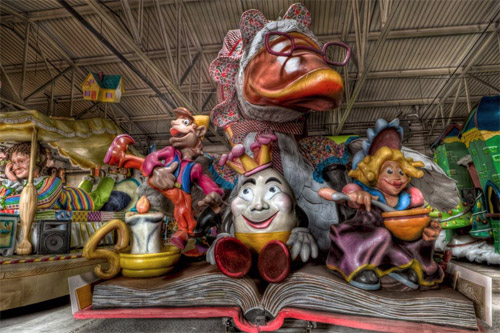 The Michigan Picture Project had a great photo feature last year on America’s Thanksgiving Day Parade (music & animated clown warning), held every year in Detroit that lifts the curtain with a stunning selection of HDR images of the floats in the warehouse. On Parade in Waiting they write:

The Thanksgiving Parade that fills Woodward Avenue in downtown Detroit for several hours every year is actually an ongoing work in progress that has delighted spectators for decades. Detroit’s first Thanksgiving Parade in 1924 featured 10 floats inspired by nursery rhymes, including Mother Goose and The Old Woman Who Lived in a Shoe, along with several marching bands. As the parade grew into a major event, new floats and characters joined those original figures, and all of these parade creations emerge from storage in huge warehouses to march again down Woodward Avenue.

Floats added in recent years celebrate Downtown Detroit, the Automobile Industry, and American Freedom. Many skilled hands collaborate to create each new float and every giant head that entertains the thousands of parade-watchers who line the route. During the weeks leading up to the parade, the floats and figures come out from warehouse storage, to be polished up in preparation for the big day. Photographer Eric Smith used a digital technique to convey the storybook magic of the parade characters as they wait to come to life.

Detroit’s Thanksgiving Parade was produced by the J. L. Hudson Company from the parade’s beginning in 1924 until 30 years ago. The store’s Display Department created and cared for the floats and giant heads. In 1979, Hudson’s passed parade sponsorship and control to Detroit Renaissance, and in 1983 that responsibility went to the Michigan Parade Foundation. Since 1990, The Parade Company has managed the parade with enthusiastic help from thousands of volunteers and support from dozens of Detroit businesses and civic groups.

Click here to see this and the other pictures bigger and see more of Eric’s work at ericsmithphotography.com. Don’t miss the parade at 9:20 AM on Thanksgiving!