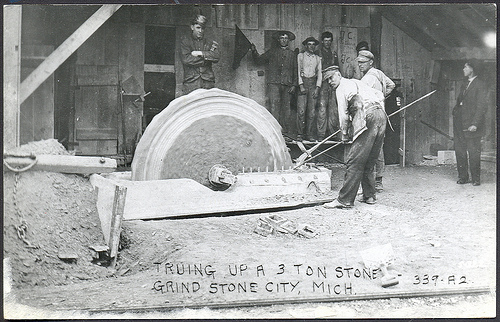 “Grindstone City received its name in 1870. It happened in this way. Mr. James Wallace, one of the owners of the quarry at that time was talking to Mrs. Sam Kinch Sr., when she remarked that the village was growing so fast that it ought to have a name. They were discussing Stonington as a name when Mrs. Kinch suggested Grindstone and Mr. Wallace added City and from then on the village has been known as Grindstone City.”
from Mabel Cook’s “History of Grindstone City, New River and Eagle Bay” (1977).

The excellent history of Grindstone City from the Michigan State University, Department of Geography tells the fascinating story of the Huron County town that was once where the world turned for grindstones. This was due to the particular qualities of “Grindstone”, a special rock formation from Marshall Sandstone that made the finest sharpening stones. It all began:

In the year 1834, Capt. Aaron G. Peer, with his Schooner, the Rip Van Winkle, was forced to take haven in this natural harbor, during a storm. Capt. Peer is known as the “father” of Grindstone City, and located the first land in what is now Huron County. The sloop took anchorage here in a storm, and that Capt. Peer, his crew and his father came ashore to what was then a wilderness of pine, cedar, ash, beech, and maple, the cedar being so thick that snow remained in places although it was midsummer. In their exploring they found some big flat stone along the beach and on further examination, found evidence that these strata of rock was underlying the area to a lesser or greater extent . Samples were taken to Detroit where they were found superior to the Ohio flagstone which city officials were planning to use to pave some of the streets.

…On one trip, the sailors rigged up in a crude fashion a stone slab and used it to sharpen their tools. That year (1838) Capt. Peer, getting the idea from the sailors began shaping the grindstones at the place later known as Grindstone City.

Definitely read on to learn about the process that produced the grindstones from quarry to turning the stones shown above and ultimately to market.

One of the most commented posts on Michigan in Pictures is Not much remains of Grindstone City which featured a photo of one of the few remaining grindstones by Marty Hogan on a beach that was once covered in them. Here’s the Google Earth of Grindstone City, and there’s also a Grindstone City Facebook page with some photos and folks sharing memories and photos.

Don says the postcard above is from 1935. View it background big or settle back for his Grindstone City postcard slideshow.