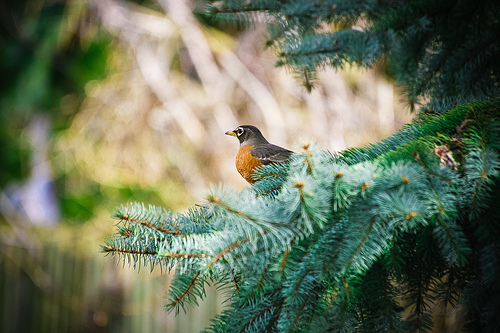 “WHEREAS, A widely and generally conducted contest to choose a State bird, carried on by the Michigan Audubon Society, resulted in nearly 200,000 votes being cast, of which Robin Red Breast received many more votes than any other bird as the most popular bird in Michigan; and WHEREAS, The robin is the best known and best loved of all the birds in the State of Michigan; therefore BE IT RESOLVED BY THE HOUSE OF REPRESENTATIVES (THE SENATE CONCURRING), That the robin be and the same is hereby designated and adopted as the official State bird of the State of Michigan.”
~Michigan House & Concurrent Resolution, April 8, 1931

A sign of spring in Michigan is the sighting of your first robin. Like daffodils, they’ve showed up early this year. American Robin (Turdus migratorius) at All About Birds has some great facts and photos about our state bird:

The quintessential early bird, American Robins are common sights on lawns across North America, where you often see them tugging earthworms out of the ground. Robins are popular birds for their warm orange breast, cheery song, and early appearance at the end of winter…

Read on for more including the various songs of the robin and some video. More photos and info from Turdus migratorius (American robin) at UM Animal Diversity Web and at American Robin on Wikipedia. Also don’t miss A blue like no other: Robin’s Egg Blue on Michigan in Pictures.

Check this photo out on black and in Shannen’s slideshow.