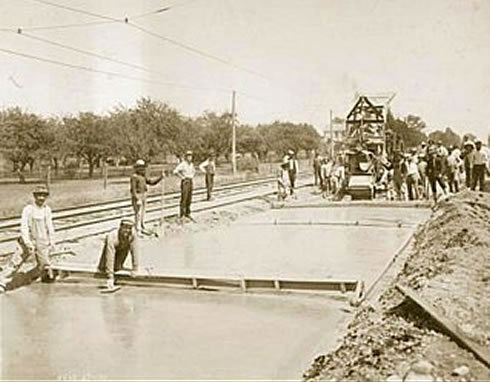 The year was 1909, and it was a big year in Detroit. Ty Cobb led the Detroit Tigers to a League Pennant at Bennett Park, Henry Ford introduced the Model T and J.L. Hudson was scouting out a location at Woodward and Farmer for his department store’s new location.

Also that year, the Wayne County Road Commission introduced the world to a new kind of road: Concrete. The only place it could be found that year was Woodward Avenue between Six and Seven Mile Roads in Greenfield Township, which is now northwest Detroit.

Roads up to that point – if they were paved at all – had been built with brick, cobblestone, or a material called macadam, which was not much more than stones sprayed with a tar to form some kind of wear resistant surface. Unfortunately, brick and cobblestone were uneven and labor intensive, while macadam didn’t last long.

Read on for more about this Michigan first, from the creation of Michigan’s first road commission in Wayne County in 1906 (Henry Ford was a charter member) to the details of this and other transportation innovations from the Motor City. They also have the facts about that first mile including the cost ($13,492.83) and daily pay of workers.

More cars on Michigan in Pictures.