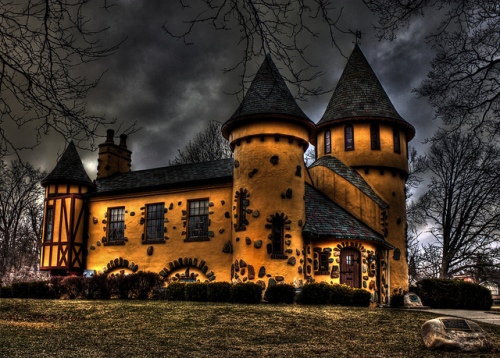 By 1909 he had saved enough money to travel to the Canadian northwest, a trip that provided the inspiration for his wilderness adventure stories. The success of his novels afforded him the opportunity to return to the Yukon and Alaska for several months each year that allowed him to write more than thirty such books.

By 1922, Curwood’s writings had made him a very wealthy man and he fulfilled a childhood fantasy by building Curwood Castle in Owosso. Constructed in the style of an 18th century French chateau, the estate overlooked the Shiawassee River. In one of the homes’ two large turrets, Curwood set up his writing studio. He also owned a camp in a remote area in Baraga County, Michigan, near the Huron Mountains as well as a cabin in Roscommon, Michigan.

Curwood was an avid hunter in his youth; however, as he grew older, he became an advocate of environmentalism and was appointed to the Michigan Conservation Commission in 1926. The change in his attitude toward wildlife can be best expressed by a quote from The Grizzly King: “The greatest thrill is not to kill but to let live.”

Nearly 100 films were made from his books. You can visit Curwood Castle Museum in Owosso and definitely have a look at this great video from Michigan Magazine TV on Curwood and his castle.

Check this out bigger and also see LightuptheDarkn3ss’s Flickriver.

Also see the Curwood Castle slideshow in the Absolute Michigan pool and lots more Michigan history on Michigan in Pictures!