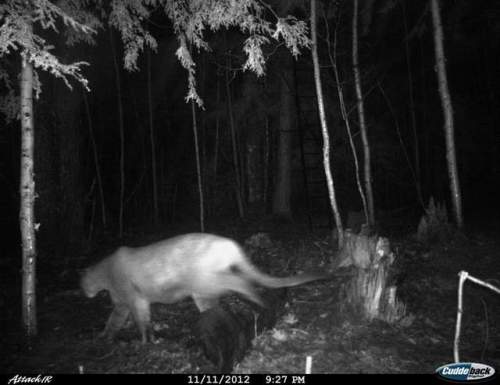 The Michigan Department of Natural Resources announced yesterday that three recent trail camera photos of cougars in the Upper Peninsula have been verified by the DNR:

…DNR Wildlife Division staff have now verified the presence of cougars in the Upper Peninsula 20 times since 2008.

“The increasing number and frequency of verified cougar sightings in recent years are likely due to three factors in particular: The growing popularity of trail cameras used to monitor wildlife activity in the woods 24 hours a day; additional transient cougars moving east from established populations in western states as they seek new territory; and the cooperation of the public in reporting cougar sightings and sharing their photos with us for official review, which we greatly appreciate,” said Adam Bump, one of four DNR biologists specially trained to investigate cougar reports.

The DNR adds that cougars may travel hundreds of miles in search of new territory – as far as Connecticut from South Dakota.

You can report cougar tracks and other evidence should be made to a local DNR office or by submitting the sighting on the DNR’s online reporting form at www.michigan.gov/cougars.

More on the Michigan cougar saga on Michigan in Pictures.