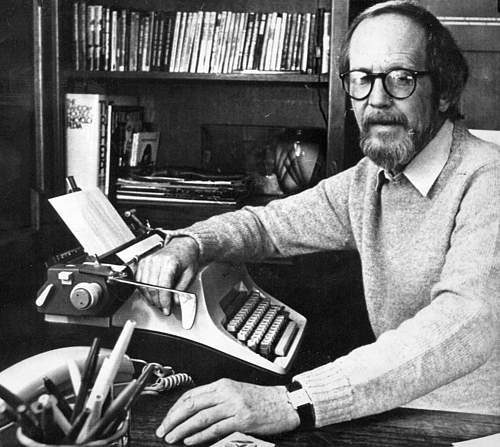 “After 58 years you’d think writing would get easier. It doesn’t. If you’re lucky, you become harder to please. That’s all right, it’s still a pleasure.”
~Elmore Leonard

Legendary Michigan author Elmore “Dutch” Leonard passed away Tuesday at the age of 87. Leonard was the author of many best-selling crime novels including Get Shorty, Freaky Deaky and Killshot. Another great Michigan author, Jim Harrison, wrote:

“Elmore was the opposite of the loudmouthed, big shot novelist. He was graceful, fairly quiet and poignantly intelligent. We have lost our best. No one wrote better dialogue in America.”

The photo above appeared in The Dickens of Detroit from Seeking Michigan on Leonard’s birthday (October 11, 2011). They do a nice job of hitting the highlights of an illustrious career:

Leonard was born in New Orleans in 1925. He has made the Detroit area his home since 1934, when his family moved there. The city of Detroit often serves as the main character in his novels. As a result, fans often refer to Elmore Leonard as the ‘Dickens of Detroit.”

Leonard graduated from University of Detroit Jesuit High School in 1943. He then immediately joined the Navy, where he served with the Seabees. After his service, he enrolled at the University of Detroit and graduated in 1950 with a degree in English and Philosophy. Leonard started his writing career as a copywriter at the Campbell-Ewald Advertising Agency. Writing on the side, he was able to publish his first novel, The Bounty Hunters in 1953. In his early career, he focused on writing pulp Westerns, because that was what was selling at the time. Leonard eventually moved on to specialize in crime fiction and suspense thrillers. A large number of his books have been turned into movies or television programs.

Critics praise Leonard for his effective use of dialogue and the gritty realism in his books. His unique ear for dialogue and the ability to capture it on the page is rarely matched. Concise and plot driven, his stories are stuffed with colorful characters and tricky, often humorous plot twists.

Read on for more. Here are a few of the best features I found – please feel free to post more in the comments: