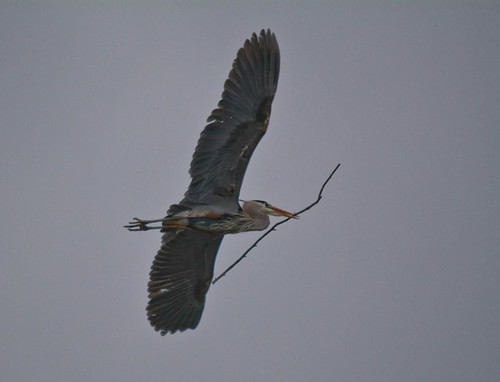 Last year I cited the Michigan Natural Features Inventory entry for Great Blue Heron Rookeries. It remains the definitive source, so I guess a rewind is in order:

The great blue herons in Michigan are largely migratory, with almost all leaving the state during the winter months. Most leave by end of October and return in early to mid-March.

The great blue heron is mostly a colonial nester, occasionally they nest in single pairs. Colonies are typically found in lowland swamps, islands, upland hardwoods and forests adjacent to lakes, ponds and rivers. Nests are usually in trees and may be as high as 98 ft. (30 m) or more from the ground. The platform like nests are constructed out of medium-sized sticks and materials may be added throughout the nesting cycle. Nests are usually lined with finer twigs, leaves, grass, pine needles, moss, reeds, or dry gras. The same nests are refurbished and used year after year…

Most great blue herons return to southern Michigan heronries in mid-March although a few may remain through the winter if there are areas of open water. Courtship and nest building commences from early April in southern Michigan to early May in the extreme northern portions of the state. Both sexes are involved in the nest building process with males primarily gathering sticks from the ground, nearby trees, or ungarded nearby nests. Males pass sticks to females who then place them on the nests.

Click to read more and you can see more on these herons at the Kensington Metropark’s annual Heron Days May 17 & 18, 2014.

You can read more about heron rookeries and Michigan herons and get more spring wallpaper on Michigan in Pictures.

One thought on “Nest Building Heron”