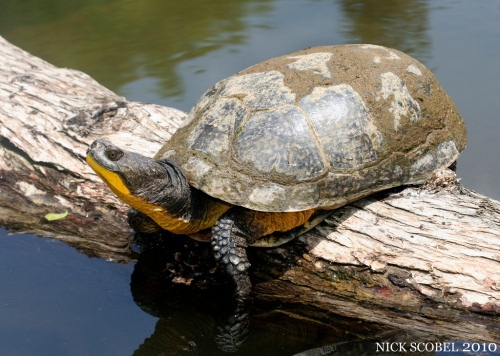 One of the most popular posts on Michigan in Pictures is Know Your Michigan Turtles where there’s now 6 of Michigan’s 10 turtle species profiled. For all those folks who come by to hang with our hard-shelled friends, here’s the latest installment in the series!

The University of Michigan Animal Diversity Web entry for Emydoidea blandingii (Blanding’s Turtle) says that the Great Lakes region is currently a stronghold for this species:

Blanding’s turtles are found in and around shallow weedy ponds, marshes, swamps, and lake inlets and coves most of the year. They prefer slow-moving, shallow water and a muddy bottom with plenty of vegetation.

Blanding’s turtle are medium sized turtles with a carapace length ranging from 15.2 to 27.4 cm. These semi-aquatic turtles have moderately high, domed carapaces. They are elongate and smooth, lacking keels or sculpturing. The carapacial scutes display distinct growth annuli most prominently seen in juveniles. Coloration between individuals is highly variable. The carapace is black or gray with any variation of scattered light yellow or whitish flecks or dots. The light spots and flecks predominate in some individuals while others are almost solid black. The plastron is yellow in color with a dark blotch in the outer corner of each scute, and has a V-shaped notch near the tail.

Blanding’s turtles, like most other turtles, emerge to bask on sunny days. Basking sits include logs, grass clumps, sloping banks, or high perches near the water. Although these turtles are quite tolerant to cold, the summer heat may restrict their activities to early morning and evening or possibly a more nocturnal lifestyle. In the event of their habitat drying up some individuals will opt to migrate to new bodies of water while others simply burrow into the mud and aestivate until conditions improve. Blanding’s turtles generally hibernate from late October until early April, but quite often they can be seen moving slowly below the ice.

Blanding’s turtles are omnivores. Their favorite food items are crustaceans but they also feed on insects, leeches, snails, small fish, frogs, and occasionally some plants. Food is captured with a rapid thrust of this turtle’s long neck, similar to the feeding actions of the snapping turtle (Chelydra). Feeding mostly occurs underwater and food seized on land is generally carried to the water for swallowing. Prey is either swallowed whole or if it is too large it is held by the jaws and shredded into smaller pieces by the front claws.

View Nick’s photo bigger and see a lot more of his photos of Blanding’s turtles on Flickr including this shot of the turtle’s amazingly long neck. Nick also runs the Herping Michigan Blog, a great resource to see a lot of reptiles and amphibians in the wild!