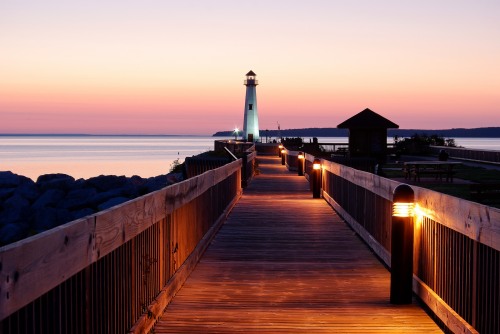 While many of Michigan’s historic lighthouses have been decommissioned and are mostly ornamental, Pure Michigan tells the story of how the Wawatam Lighthouse started out as an ornamental lighthouse and now actually has a job! Thinking there’s a children’s story here…

This classic lighthouse started life in 1998 as a Michigan Welcome Center travel icon at Monroe, Michigan. In 2004, the Monroe Welcome Center was being revamped and the lighthouse was put up for relocation. The City of St. Ignace was the lucky recipient and the structure was trucked north in five pieces. It stayed on the Chief Wawatam Dock for a time, awaiting the construction of its new platform. The red, white and green lighthouse was repainted in bright white with red accents. In June 2006, a crane reassembled the tower on its new site. Everything was in readiness, just waiting for U.S. Coast Guard certification. Wawatam Lighthouse takes its name from the late railroad ferry Chief Wawatam, which used this same dock from 1911 through the mid-1980s.

When you visit the lighthouse, you will pass right by the Chief’s old lift gate. Wawatam Lighthouse’s beacon was first lit on August 20, 2006. Visible for more than 13 miles out over Lake Huron, it is now an official aid-to-navigation. The 250 millimeter Fresnel lens casts its light in a 152 degree arc. Though the lighthouse’s GPS location is 45-051-19.700 N by 084-42-09.000 W, it will most likely be easier for you to find it straight out east of McCann Street. The tower is 52 feet tall, but the Coast Guard looks at it in a different way. They rate it as 62 feet tall from the water. It is even lit in the winter to guide snowmobiles across the frozen lake.