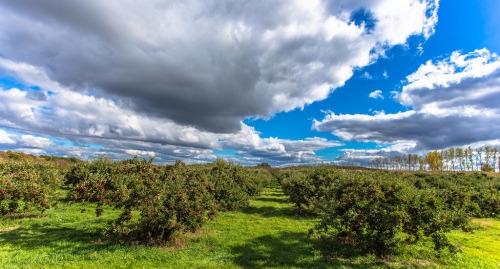 The Freep reports that Michigan is forecasting a crop of almost 29 million bushels of apples in 2014:

This year’s estimate is just under the record 30 million bushels that were picked last year. The yield in 2013 was so robust that some of the state’s growers and packers, most of whom are on the west side of the state, filled their storerooms and even rented additional space to handle all the extra big crop.

In addition to setting a record, Smith said last year’s bumper crop put Michigan in the No. 2 spot for apple production, pushing New York down to No. 3.

Washington is by far the No. 1 apple-producing state in the country, growing more than twice as many apples as Michigan and New York combined.

Additional fun apple fact from this well-done Freep article: If you want Michigan apples, McDonald’s has them. The fast food giant is a major customer for the Michigan apple industry, purchasing 25.5 million pounds in 2013.

View Bob’s photo from last October of an orchard near Rothbury in west Michigan bigger and see more pics in his slideshow.

More apples on Michigan in Pictures!