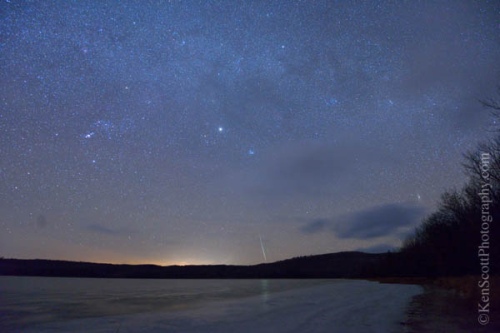 As you’re making plans for this weekend, consider including some offbeat nightlife. EarthSky has everything you need to know about this weekends Geminid Meteor Shower:

The peak night of the 2014 Geminid meteor shower will probably occur on the night of December 13 (morning of December 14). The night before (December 12-13) may offer a decent sprinkling of meteors as well. Geminid meteors tend to be few and far between at early evening, but intensify in number as evening deepens into late night. A last quarter moon will rise around midnight, but Geminid meteors are bright! This shower favors Earth’s Northern Hemisphere.

…In a year when moonlight doesn’t obscure the view, you can easily see 50 or more Geminid meteors per hour on the peak night. However, in 2014, the waning moon will dampen the display in the peak viewing hours. Don’t let the moonlight discourage you. A good percentage of these yellow-colored Geminid meteors are quite bright and will overcome the moonlit skies.

Even as the moon rises, however, it will be sitting low in the east. If possible, find a hedgerow of trees, a barn or some such thing to block out the moon. Sit in a moon shadow but at the same time, find an expansive view of sky. Or simply look away from the moon.

Read on for all kinds of viewing tips and all kinds of info about about this December meteor shower including the chance of seeing an earthgrazer meteor, a slow-moving, long-lasting meteor that travels horizontally across the sky.

View Ken’s photo from December 14, 2012 bigger and see more in his massive Skies Above slideshow.

More meteors on Michigan in Pictures!