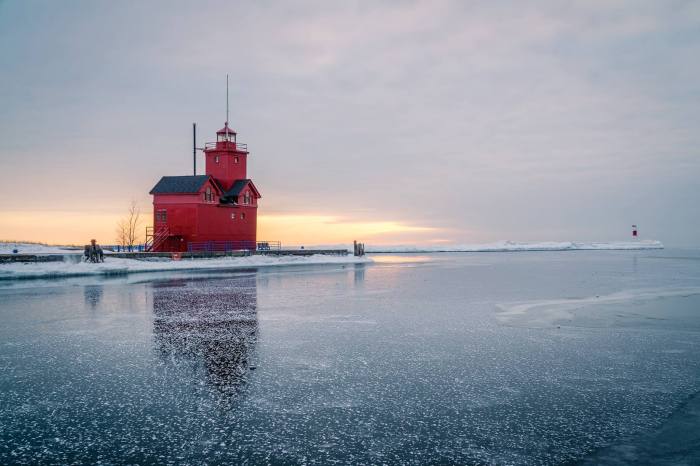 Reflections of a cold sunset, photo by Tony Reidsma

A Coast Guard crew arrived in Holland in 1956, and gave the combined fog signal building and lighthouse a fresh coat of bright red paint in order to conform to its “Red Right Return” standard, which called for all aids to navigation located on the right side of a harbor entrance to be red in coloration. Local residents thus began referring to the fifty year old structure as “Big Red,” a name which has stuck through the years. The Fourth Order lens was subsequently removed from the fog signal lantern in the late 1960’s, and replaced with a 250 mm Tidelands Signal acrylic optic.

With the fading of the Great Lakes passenger fleet, Holland Harbor had ceased to serve any real commercial traffic. With the station now serving only as a beacon to guide pleasure boats in and out of Lake Macatawa, the Coast Guard announced plans to abandon the old fog signal building to eliminate ongoing maintenance costs in 1972. Over the years, “Big Red” had become as much of an iconic symbol of tourist-centered Holland as tulips and windmills, and fearing the loss of their beloved landmark, the citizenry of Holland gathered together and circulated petitions in an attempt to save the historic structure. To this end, the Holland Harbor Lighthouse Commission was formed in 1974 to coordinate preservation and restoration efforts, and continues to manage the structure to this day.

View Tony’s photo big as Big Red on Facebook and see and purchase some of his work at imagesforyourwalls.com.  If you’re in an icy mood, consider attending the opening of his Frozen In Time exhibition at the Holland Arts Council from March 5 – April 18, 2015. The opening reception is March 5th, starting at 6pm.

More winter wallpaper and more lighthouses on Michigan in Pictures!