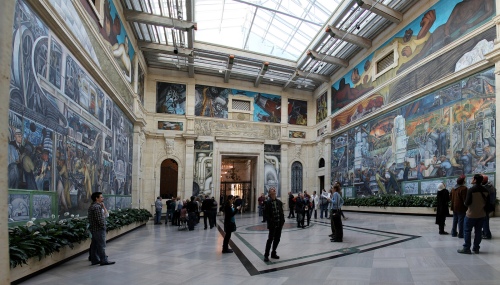 Crain’s Detroit Business has a report on this Sunday’s DIA opening ‘Diego Rivera and Frida Kahlo in Detroit’:

When Diego Rivera and his wife and fellow artist Frida Kahlo were in Detroit in 1932-33, the worst of the Great Depression was upon the country.

A labor march had just taken place in Detroit, and four workers had been killed, said Mark Rosenthal, adjunct curator of contemporary art at the Detroit Institute of Arts, speaking during a media preview of the exhibit Tuesday morning.

Rivera and Kahlo, described by the museum as “an explosive couple” in their own right, arrived on the scene — he carrying a pistol, and she carrying a flask.

He romanticized Detroit, and Kahlo, who suffered a miscarriage while in Detroit, rejected the city, the DIA said.

Yet out of that time came pivotal work for both artists.

Rivera created the “Detroit Industry” murals on the DIA’s walls, which he considered to be his greatest work, Rosenthal said. And Kahlo, encouraged by her husband, began to create the paintings that would typify her career and make her famous.

The DIA’s upcoming “Diego Rivera and Frida Kahlo in Detroit” exhibit, which opens Sunday, will give art enthusiasts a chance to see who the artists were before they came to Detroit and who they were after, Rosenthal said.

Read on for more and get information about the exhibit that runs Sunday through July 12th from the DIA (including an opening lecture Sunday at 2).

View Trish’s photo bigger on Flickr and see more in her Detroit slideshow.

More museums and more art on Michigan in Pictures.