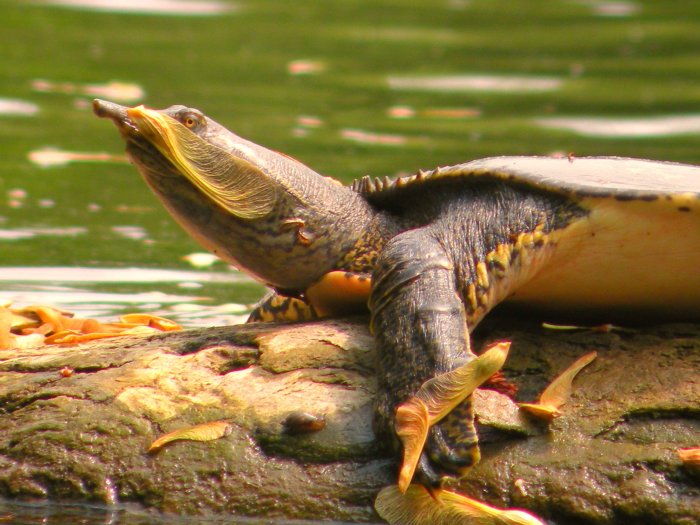 One of the most popular posts on Michigan in Pictures is Know Your Michigan Turtles where we now have 8 of Michigan’s 10 turtle species profiled. You can click that link for the list of all of them and read on to learn about the soft shell turtle.

…Spiny softshell turtles are diurnal animals, spending most of the day basking in the sun and foraging for food. They can be spotted sunning on logs and river banks. If disturbed, they will quickly retreat into the water and bury themselves in sand, leaving only their heads visible. These turtles are also able to breathe underwater for extended periods through their pharyngeal lining, cloacal lining, and skin. Spiny softshell turtles spend October to April in the water buried underneath substrate in a state of dormancy.

Apalone spinifera preys on on various macroinvertebrates such as aquatic insects, crayfish, and occasionally a fish. They find their food underneath objects, along the floor of the lake, and in vegetation. They also hide in the floor substrate and grab prey as they swim by.

Read on for a whole lot more including photos.

David says to be sure to check out the seed pod copter on this turtle’s face! View it background big and see more in his Wildlife slideshow.