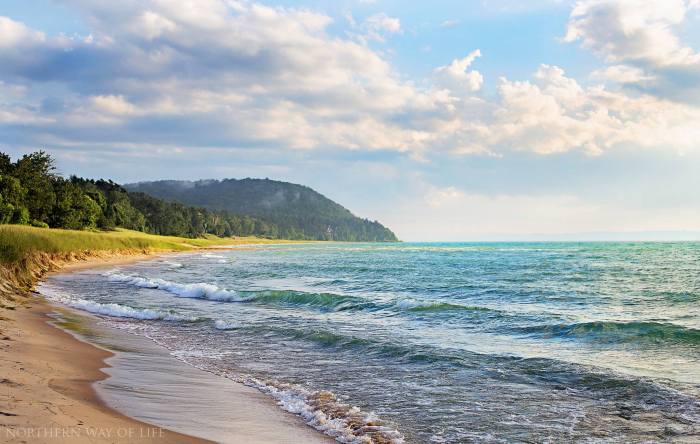 Van’s Beach in Leland, photo by Northern Way of Life

Van’s is the most popular public beach in my hometown of Leland for reasons that are probably made obvious by this photo. When Traverse City Tourism shared the picture, I figured I should too!

The Leelanau Conservancy has this to say about Hall Beach, also known as Van’s Beach:

The beach is Leland’s first public beach on Lake Michigan since the harbor was constructed in 1970. It lies at the base of the south breakwall of the harbor and was originally owned by the Hall family. The beach area was made possible by the Hall Family and the Michigan Natural Resources Trust Fund.

It lies at the base of the breakwall and connects Fishtown to the rest of the public beach to the south which was gifted by the Miller Taylor families. Linked together, these areas create an uninterrupted protected area from Fishtown to where the trail comes down to the water from the parking area at the road end of Cedar street – for both wildlife and public to enjoy. A favorite place for watching Lake Michigan sunsets, Hall Beach also protects historic Fishtown from future commercial development.

Click through for a map and to see more beaches and preserves on the Leelanau Peninsula.

I will add that Van’s beach got its name from Van’s Garage, owned by the Van Raalte family. Also, when the wind is from the north or northwest this is one of the area’s best surf spots. The point you can see in the distance is Whaleback, also preserved by the Leelanau Conservancy.

View the photo bigger on Facebook, see several more in the Traverse City Tourism feature and definitely follow Northern Way of Life on Facebook for lots more from the Leelanau Peninsula & Northern Michigan.