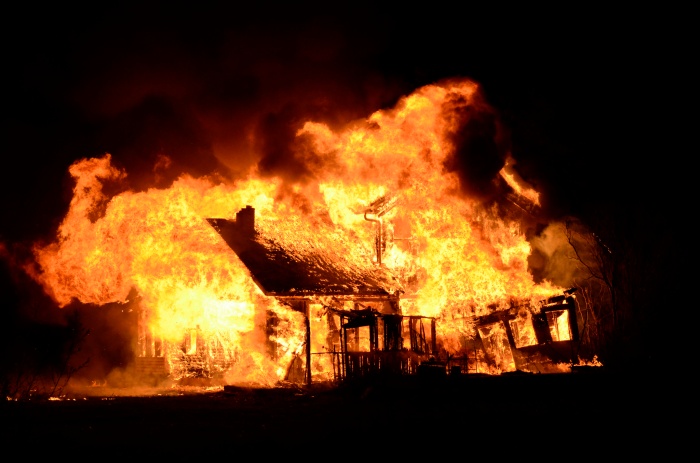 “The proponents of the cometary explanation cite many fascinating details confirmed by eye witness reports: the descent of fire from the heavens, a great ‘tornado’ of fire rushing across the landscape and tearing buildings from their foundations, descending balls of fire, a rain of red dust, great explosions of wind accompanied by blasts of thunder, buildings exploding into flame where no fire was burning, and a good deal more.”
~thunderbolts.info

We all probably know of Mrs. O’Leary’s cow and the Chicago Fire that burned over three miles of the city to the ground, but perhaps you’d care to take “Fires beginning October 8, 1871” for $500? Four fires began 144 years ago on this day in 1871: the Great Chicago Fire, the Great Michigan Fire, the Peshtigo (Wisconsin) Fire and the Port Huron Fire.

I’m going to let the crew of thunderbolts take it away with an excerpt from their fascinating feature The Comet and the Chicago Fire:

Contrary to popular folklore, the Chicago fire is not the worst in U.S. history. It was not even the worst to occur on October 8 that year. The same evening—in fact, at the same time, about 9:30—a fierce wildfire struck in Peshtigo, Wisconsin, over 200 miles to the north of Chicago, destroying the town and a dozen other villages. Estimates of those killed range upward from 1200 to 2500 in a single night. It was not the Chicago fire but the simultaneous “Peshtigo Fire” that was the deadliest in U.S. history.

And there is more. On the same evening, across Lake Michigan, another fire also wreaked havoc. Though smaller fires had been burning for some time—not unusual under the reported conditions—the most intense outburst appears to have erupted simultaneously with the Chicago and Peshtigo fires. The blaze is said to have then burned for over a month, consuming over 2,000,000 acres and killing at least 200.

Concerning the Michigan outburst, it is reported that numerous fires endangered towns across the state. The city of Holland was destroyed by fire and in Lansing flames threatened the agricultural college. In Thumb, farmers fled an inferno that some newspapers dubbed, “The Fiery Fiend.” Reports say that fires threatened Muskegon, South Haven, Grand Rapids, Wayland, reaching the outskirts of Big Rapids. A steamship passing the Manitou Islands reported they were on fire.

There can be no doubt that weather conditions at the time favored wildfires. But never before, and never since, has the U.S. seen such wildly destructive simultaneous conflagrations. This “coincidence”, combined with many unusual phenomena reported by eyewitnesses, has led some to conclude that an extraordinary force, one not of the earth, was a more likely “arson” than either a misbehaving cow or a regional drought.

In 1883, Ignatius Donnelly, author of Ragnarok: the Rain of Fire and Gravel, suggested that in early historic times our Earth suffered great catastrophes from cometary intruders. To this claim he added: “There is reason to believe that the present generation has passed through the gaseous prolongation of a comet’s tail, and that hundreds of human beings lost their lives”. He was referring to the conflagration of 1871.

Definitely read on for much more about the possibility of a comet’s tail, perhaps Comet Biela, fueling the fires.

Ogedn took this photo of a controlled burn by the local fire department, who practiced on this house before letting it burn. View the photo background big and see this and lots more in their slideshow.

PS: I definitely did more research on this than I should have on this, and while the cometary theory and Comet Biela was observed to be broken apart on its pass in 1846, it may be that Biela’s Comet returned in September of 1872. In any case check the article out and also their Picture of the Day for a lot more than you’ve probably thought about.