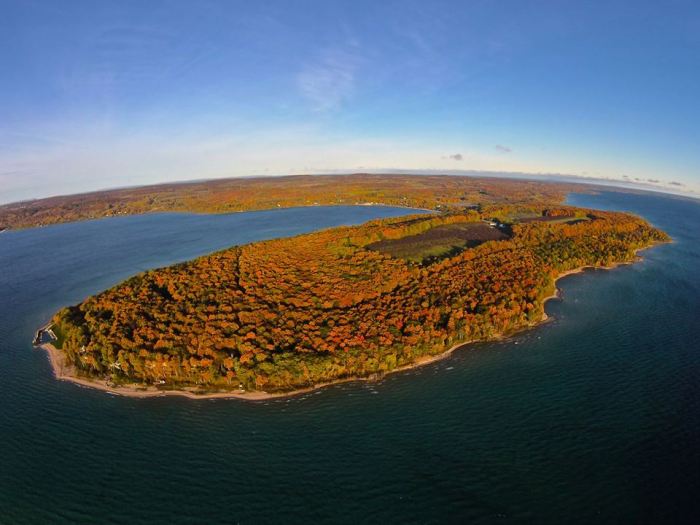 The Colors of Omena, photo by Elijah Allen

Here’s a shot by a friend taken just north of me showing the incredible fall color that’s still out there along the Lake Michigan coast. It was taken from off Omena Point at the northern part of the Leelanau Peninsula, so how about a little Omena history courtesy the Omena Historical Society?

The Omena settlement had its beginnings when Aghosa Indians started arriving in 1850. In 1852, the Reverend Peter Dougherty and a band of Ottawas and Chippewas led by Chief Ahgosa moved from the present-day Old Mission Peninsula to a beautiful little bay on the Leelanau Peninsula’s eastern side. Chief Shabwasung and his Ottawa band were already encamped on the point to the north of the bay, on land Chief Ahgosa and his families from Old Mission had purchased. Ahgosa settled a little to the north, and his village became Ahgosatown. Both bands became part of the New Mission, soon to be called Omena.

Young George A. Craker came with Dougherty and taught farming to students in the mission school, and he and his descendants became active workers in Dougherty’s Grove Hill New Mission Church. Now called the Omena Presbyterian Church, it was dedicated in 1858 and has stood as the oldest Protestant Church in Leelanau County and one of the oldest historical landmarks in Northern Michigan. The Ahgosa family was also very active and some are now buried in the mission cemetery.

Click through to read more and for some historical photos of Omena.

View Elijah’s photo bigger on Facebook and scroll though when you get there for more!