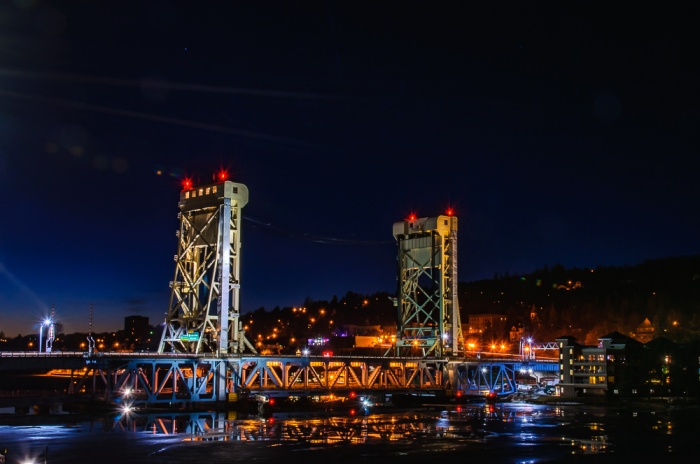 One of the requests I recently received was for more yesterday and today features The City of Hancock has a truly excellent series of in-depth pictorials. You should really check them out! Their feature on the Portage Lake bridges says (in part):

In 1897, the Mineral Range Railroad Company built a new iron swing type bridge, replacing the old wooden bridge. This bridge also featured a two lane roadway, with a railroad crossing underneath. New reconstructed support cribs were also sunk. But on August 15, 1905, disaster struck, when the steamer Northern Wave (Mutual Transit Lines), en route to the Quincy Smelter to pick up copper ingots, smashed into the center section, destroying much of it. The mishap was apparently caused by a mixup in signals.

The bridge would be replaced one year later, again with an iron bridge, and center swing section, and a control house above the roadway, over the center turnstile. This new bridge would have 118 ft. of clearance on the north maritime passage, and 108 ft. on the south side passage. (Newspaper accounts of the period, gave maritime traffic at 6,000 bridge openings per year, and up to 40 daily train crossings per day, both of which began to taper off by 1920). Although almost struck again in 1940 by the Steamer Maritana (Hutchenson Lines), it narrowly avoided the collision by dropping its anchors which caught the submarine telephone cables, stopping it just short of the bridge. (This would happen again 20 years later). Light signaling was added during WWII, to augment the steam whistles already in use. The bridge served the communities until 1960.

In the late 1950s, the Michigan Department of Transportation began studies on how best to replace the aging bridge, with a more modern one, that would accommodate the now much larger ships plying the waterway. It was decided to build what would be become the worlds heaviest aerial lift bridge, which was under construction by 1959, just to the West of the then current bridge. This new bridge, with 4 traffic lanes above, and a railroad crossing below, had its ribbon cutting on Saturday, June 25, 1960. But it almost didn’t happen. During the night before, the Steamer J.F. Schoelkoff (American Steamship Company), traveling westward, signaled for the bridge to open, but the signals were not acted on. Dropping all their anchors, they snagged the submarine telephone cables in an eerie repeat of 20 years previously. Onlookers for the ribbon cutting ceremonies were treated to the spectacle of a large freighter jammed crossways in the waterway, just a quarter mile from the Bridge. Area phone service was disrupted for nearly three days. Telephone service to the bridge, and marine radios were installed shortly. That incident not withstanding, the new Portage Lake Lift Bridge continues to well serve the area, as the possibility of adding yet another new bridge may be explored.

Read on for more!

You can purchase this photo on Robert’s website and see more in his slideshow.