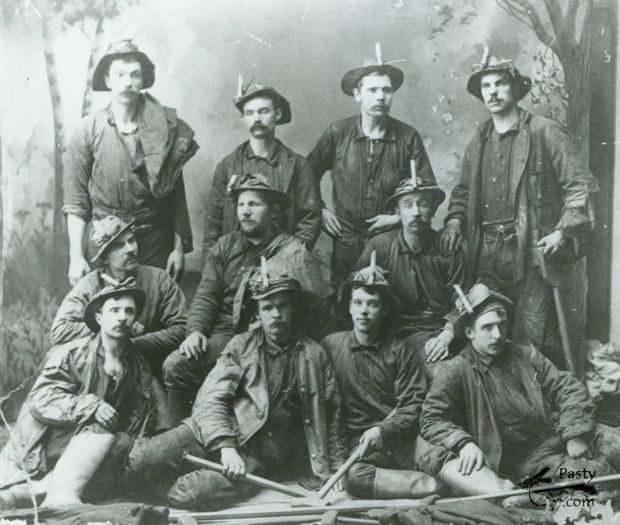 Pasty Central is  celebrating their 20th anniversary and vying for USA Today’s Best Pasty in Michigan. Click through to cast a vote for them or your favorite pasty shop.

Back in 2008, Charley of Pasty Central wrote about these UP miners who doubtless relied on the pasties in their bellies to survive:

In researching today’s Pasty Cameo I came across these men who had been entombed in Pewabic Mine at Iron Mountain for over 40 hours before they returned to the light of day. They had been trapped on the fourth level of the mine when a level above them collapsed. One of their co-workers didn’t make it out.

This picture is a good illustration of the “Tommy knocker”, a popular hat-candleholder in the 1800’s before carbide and acetylene lamps came along.

A feature of the site since 1998 has been the Pasty Cam, a daily photo that’s paired with a well-researched “This Day in History”. Today’s looks at how on on May 12, 1781 Mackinac Island (valued at 5000 pounds) passed from native tribes to the British – click to check it out!

The pasty, a savory pastry typically filled with meat & vegetables, was brought to the Upper Peninsula by Cornish miners. Check out Real Michigan Food: The Pasty on Absolute Michigan for lots more about this classic UP dish.