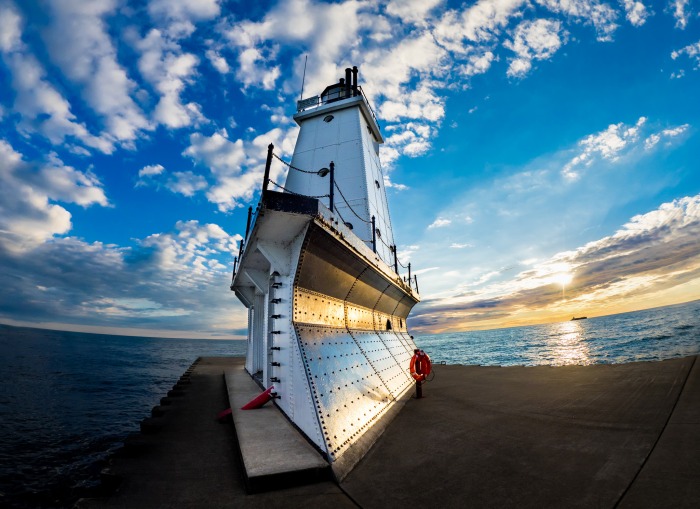 The entry for Ludington North Breakwater Light at Terry Pepper’s Seeing the Light details a ton of the history of this lighthouse including the reason for its interesting appearance:

Over the summer of 1924, a unique structure took shape at the end of the North Breakwater. The main tower, fabricated of steel plates over an internal steel skeleton, took the form of a four-sided pyramidal tower with four round porthole windows on each of the three decks within. With plans calling for the installation of an air diaphragm fog signal operated by an electrically powered compressor, there was no need for a large fog signal building, and thus the signal building took the form of a relatively small structure integrated into the base of the landward side of the main tower. In order to help protect the structure from the force of waves crashing across the breakwater, the concrete foundation at the base of the structure was formed with angled surfaces designed to deflect the force of wave action up and away from the building.

The white painted tower was capped by a square gallery and an octagonal iron lantern installed at its center. Since the standard lantern design being used by the Lighthouse Service in new construction at this time was of circular conformation with diagonal astragals, it is likely (but unconfirmed) that the lantern used on this new light was transferred from the South Pierhead beacon which the new light was designed to replace.

Click through for more including a number of old photos.

More lighthouses and more summer wallpaper on Michigan in Pictures.