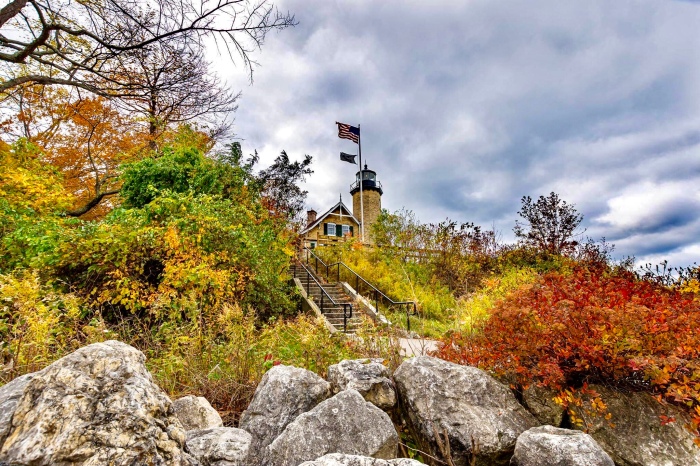 Less than a week until Halloween, so Michigan in Pictures will feature as much Michigan spookyness as possible. Today’s story appears courtesy Still on Duty at White River Light on Absolute Michigan:

When Karen McDonnell is alone she sometimes hears footsteps on the stairway of the former White River Light. But she isn’t afraid. She says, “I like the comfort it gives me. It’s like a watchman, just making sure everything is okay before it’s too late at night.”

McDonnell is the curator of an old lighthouse that has been turned into a museum. She takes care of the light and gives tours to visitors. Sometimes early in the morning or late at night she hears what sounds like somebody climbing the stairs and walking around on the upper level. She wonders if it might be the spirit of the light’s first keeper.

When the White River Light opened in the mid-1870s, William Robinson and his wife Sarah moved in. Over the years, the English couple raised their family at Whitehall. Sarah died at a young age, but William remained the lightkeeper for 47 years. When the government forced the 87-year-old keeper to retire in 1915, William’s grandson became the next lightkeeper at White River. William helped his grandson run the light, but the rules said that only the lightkeeper and his “immediate” family could live at the lighthouse. William would have to leave. But he refused, telling his grandson, “I am not going to leave this building.” He was right. The day before he had to move out, he died. His grandson buried him in a small nearby cemetery…

Read more over on Absolute Michigan and learn more about the lighthouse at White River Light on Terry Pepper’s Seeing the Light.

Cncphotos took this last week. See more in their Lighthouses gallery on Flickr!

2 thoughts on “The Haunting of White River Light”