Tic Tac Toe in the Woods by Laurent Fady

One of the nice things about drone photos is that they can reveal cool things that are lurking just beyond our perception. Laurent shares that he asked his brother who “makes” trees for a living as a biology engineer, and his brother said that it could be an effort to mark growing areas for growers.

Laurent says that the next time he drives by, he’ll investigate. Stay tuned & see more in his Aerial Photos of Northern Michigan gallery on Flickr & follow Laurent Fady Photography on Facebook!

Mouth of the Grand River by Dan Gaken

Cool shot of the Grand Haven Lighthouse at the mouth of the 252-mile long Grand River. See more shots from above in Dan’s Drone Photography gallery on Flickr.

The South Fox Light Station is located 22 miles offshore in NW Lake Michigan, south of Beaver Island and north of the Manitous. The 115 acres of MI state-owned land has much to offer, with seven original structures still standing and acres of pristine dune and wildlife; it is one of the most unique stations on Lake Michigan. The original tower was lit in 1867; the fog signal and oil house were built in 1895. The Workshop and Boat House were built in 1897. In 1934, the 68’ steel skeletal tower was brought from Sapelo Island, GA and reassembled on the island (automated in 1958). The two-story Assistant Keepers Quarters was added in 1910. The station was decommissioned in 1969.

In 1971, the State of Michigan bought the station from the Department of the Interior with a promise to provide recreational opportunity and access to the public.

You can head over to their website for information & photos about the station, its structures, and how you can help them with their work.

Diver/photographer Dusty Klifman of Blueyes Below, provided some photos for the website & the cool drone footage. Check him out for lots more photos & videos of shipwrecks & other maritime subjects.

One thing that the Coronavirus pandemic has proven is that Michiganders aren’t afraid to get creative. One of Michigan’s most creative breweries, Shorts Brewing Co of Bellaire, is no exception. Last week they shared this photo saying: A rad aerial view of Kegger Campground across the street from the Bellaire Pub or an original sketch for Pac-Man? Come check it out for yourself! Firewood is available at the Pub, and you can take your food and drink over to your own little winter wonderland.

See the photo bigger on their Facebook page & get details about Shorts at shortsbrewing.com!

Encyclopedia Britannica says that the 210-mile-long Saint Joseph River rises near Hillsdale in south-central Michigan, flowing generally west with a swing south into northern Indiana through Elkhart and South Bend before reentering Michigan to empty into Lake Michigan at Saint Joseph and Benton Harbor. Check out places to access the St. Joseph on Michigan Water Trails.

Bill took this photo of the St Joseph River near the Langley Covered Bridge with his drone a couple of weeks ago. See more of the river & the bridge in his Michigan: St. Joseph County gallery on Flickr! 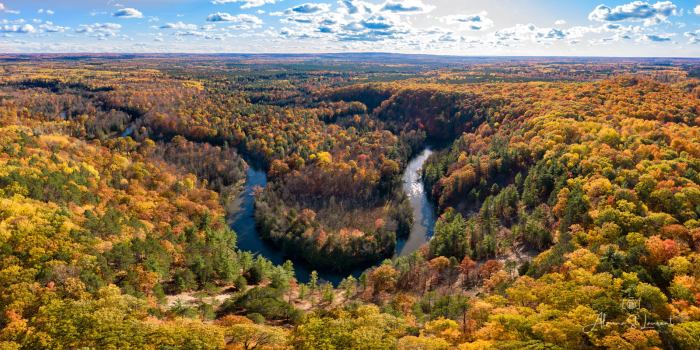 The high river bluff is the reason for the area’s unusual name. At the turn of the last century, lumbermen needed inexpensive ways to transport timber from the forest to the sawmills and wide-flowing rivers like the Manistee were the answer. Steep banks were used to “rollaway” the logs in a thunderous avalanche to the water where they floated to the mills. Unfortunately, the practice quickly stripped the vegetation from the river banks and, by the time the lumbermen moved on, eroding sand was clogging and narrowing the rivers. In the last 20 years, efforts have been made to stabilize the Manistee River High Banks with fieldstone terraces and replantings. The observation platform was installed in 2001 so visitors could enjoy the stunning view without damaging the fragile system.

Alanna took this stunning photo with her drone last week. Follow her on Facebook for lots more great shots & check out her photography workshops at Creative Visions Photographic Workshops!

Visit Charlevoix says that the Charlevoix area was part of what was called Michilimackinac formed in the Treaty of Washington in 1836:

French explorer Pierre François Xavier de Charlevoix is said to have stayed on nearby Fisherman Island and the area was named after him in 1836.

…Exclusive hotels, the Inn and the Beach, were the summer destination for people from around the Midwest. Two depots served summer guests, one at Belvedere and the Pere Marquette Railway depot. Guests also arrived in the late 1800s on steamships including the Manitou, Alabama, North American, South American, Milwaukee Clipper, and Illinois.

During the Prohibition, Chicago area gang members moved their operations to Charlevoix. The Colonial Club became a gambling joint for some of the Midwest’s most powerful. A barge-turned-speakeasy traveled from Charlevoix to Boyne City carrying passengers in style during the summer months.

Lots more at Visit Charlevoix. Laurent took this sweet aerial photo of Charlevoix back in June. See many more views from above in his Aerial Photos of Northern MI gallery!

Bill captured this interesting abstract of the lines made by two center-pivot irrigators in a soybean field near Vicksburg. See more in his massive Michigan: Kalamazoo County album & a lot more of his photography in our Michigan in Pictures group on Facebook!

According to Wikipedia’s entry for the 89-mile long Tahquamenon River in the eastern Upper Peninsula:

The river is best known for the Tahquamenon Falls, a succession of two waterfalls in Tahquamenon Falls State Park totalling approximately 73 feet (22 m) in height. Because the headwaters of the river are located in a boreal wetland that is rich in cedar, spruce and hemlock trees, the river’s waters carry a significant amount of tannin in solution (i.e., it is a blackwater river), and are often brown or golden-brown in color. The Tahquamenon Falls are thus acclaimed as being the largest naturally dyed or colored waterfall in the United States.

The meaning of “Tahquamenon” is not known. Some called it the “River of the Head Winds” because they bucked the wind on the lower river no matter what direction they were paddling. Others called it the “River of a Hundred Bends”. Twentieth century descendants of local Chippewa translated the name to mean “river up against a hill” or “lost river island” or “river with an island part way”. In 1930 Jesuit scholar, Father William Gagnieut, concluded that the meaning of the name had been lost.

Jim took this in early July. Check out more in his awesome From the Air gallery on Flickr!

On July 8th, 1850, James Jesse Strang was crowned king of Beaver Island. Michigan History Magazine shared this article with me years ago:

Despite claiming to be “the perfect atheist,” Strang became a follower of Mormon leader Joseph Smith. When Smith was murdered in March 1844, Strang claimed to be the new Mormon leader, although most Mormons followed Brigham Young to Utah.

Strang’s followers settled on an uninhabited island in northern Lake Michigan they called Big Beaver. The island had everything Strang and his followers needed: virgin timber, tillable land, a deep and sheltered bay and exceptional offshore fishing. It also was twenty-five miles off the mainland-a perfect place to protect Strang’s followers from outside influences and beliefs.

By the mid-1850s, the Mormon colony on Beaver Island boasted more than 2,500 followers. Beaver Island replaced Mackinac Island as the principal refueling stop for steamers, and the annual value of the kingdom’s exports (fish, wood and potatoes) was considerable.

The growth of Strang’s kingdom was not without controversy. Non-Mormons, called Gentiles, took exception with the Mormon settlement. Driven from the area’s fishing spots, angry over the establishment of a kingdom and Strang’s adoption of the practice of polygamy, the Gentiles vowed revenge. At the bequest of President Millard Fillmore, the U.S. district attorney prosecuted Strang for an assortment of unfounded offenses that included murder and treason. However, Strang was acquitted on all charges, and a year later he was overwhelmingly elected to the state legislature.

Strang ruled Beaver Island as an autocrat; he even had himself crowned king. But regulating every aspect of his followers’ lives led to his downfall. Describing women’s clothes as impractical and unhealthy, Strang decreed female subjects needed to dress in loose, knee-length smocks worn over modest pantaloons. Most Beaver Island women accepted the change, but a few refused to comply. When two women refused to wear pantaloons, Strang had their husbands whipped. The two men sought revenge and on June 16, 1856, they ambushed and shot their king.

On July 9, 1856, James Jesse Strang died from his wounds. He was buried in Wisconsin.

With Strang gone, enraged Gentiles charged onto Beaver Island and evicted the Mormons. After taking control of the Mormon printing office, the attackers printed a manifesto that boasted, “The dominion of King Strang is at an end.”

Andy took this back in 2016. See a lot more in his great Beaver Island, MI album on Flickr!