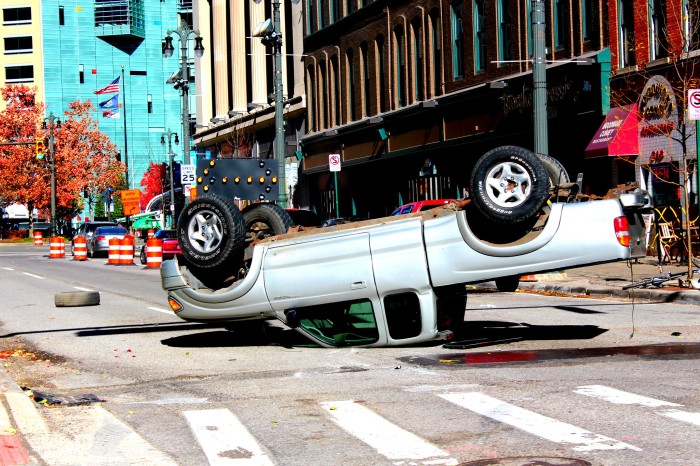 WXYZ-ABC Detroit reports that Michigan ranks as the 8th worst state to drive in:

The study looked at all states to see which were the most driver-friendly, and compared them across 31 key metrics, ranging from rush-hour traffic congestion to road quality and average gas prices.

Michigan came in 43rd, just behind Missouri and ahead of Colorado.

Marsha took this back in 2014 in downtown Detroit and would like you to help explain how this happens at a 25 mph speed limit. Head over to her Flickr for the latest!

You can check the plows out in realtime on the M-DOT map. The only one I found out & about this morning was Blizzard T Snowplow, listed as “applying material” way up on the Keweenaw Peninsula. Other names include Alice Scooper & Gordie Plowe, movie references like Darth Blader & Han Snowlo, and even “Control, Salt, Delete” for computer nerds.

Bill got this shot along M-72 along the border of Leelanau & Grand Traverse Counties in northwest lower Michigan back in 2018. See more in his Pics from the Car gallery on Flickr.

shoutout to @hksbks on Twitter for the heads up! 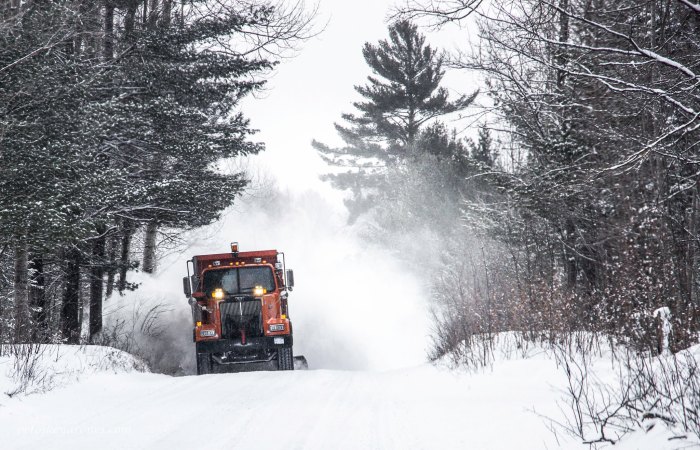 Much of northern Michigan received its first winter storm yesterday. While it was only 4-8″, the heavy & wet snow coupled with winds picking up to 40+ should make it a busy day for our friends in the orange trucks!

Laurent took this back in February of 2018. See more in his Snow & Ice gallery on Flickr & also view & purchase prints on his website.

Please take care on the roads today everyone! 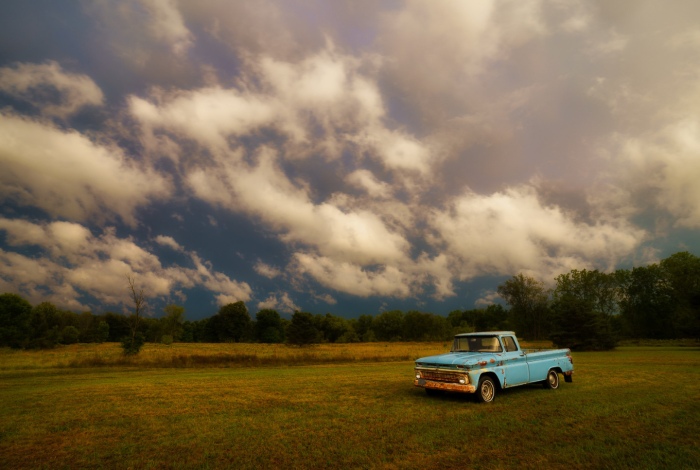 One of the defining factors of Summer 2021 in Michigan is a four letter word: rain. In addition to being one of our warmest summers on record, it’s also been one of the wettest as the Detroit News reports:

Detroit’s total included the 2.73 inches recorded Aug. 12 amid severe storms that left more than 900,000 residents across the state without electricity, some for up to a week.

Although only one daily rainfall total was broken July 16, when 2.20 inches were recorded at Detroit Metro, at least four significant flood events doused the region this summer, the weather service said.

Among them was the June 25-26 episode that flooded thousands of homes, resulting in a federal disaster declaration.

The Traverse City Ticker adds that summer 2021 was the wettest ever for Traverse City & Gaylord with Gaylord, Alpena, and Sault Ste. Marie notching their hottest summers ever.

While the rain has been a major headache for many, as Jamie writes, the skies can get pretty amazing when storms come rolling through around sunset! See more stormy goodness in his Stormy Weather gallery. You can also check out his podcasts on photography & his photography workshops at Mirrorless Minutes. 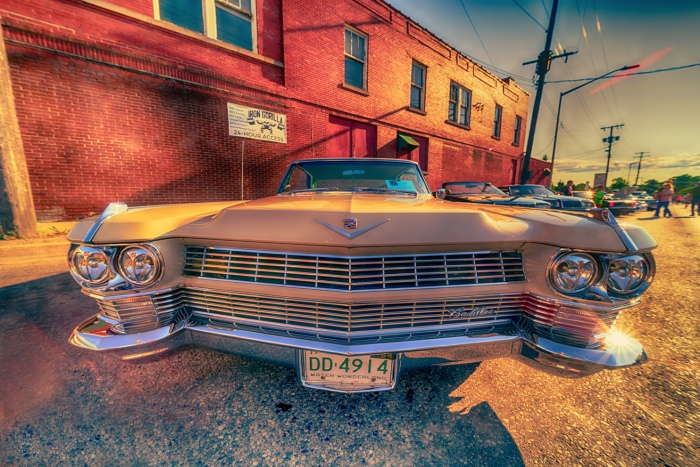 I can never get enough of these great old cars!! Charles took this earlier this month at the Cool City Car Show in Bay City. See more on his Flickr! 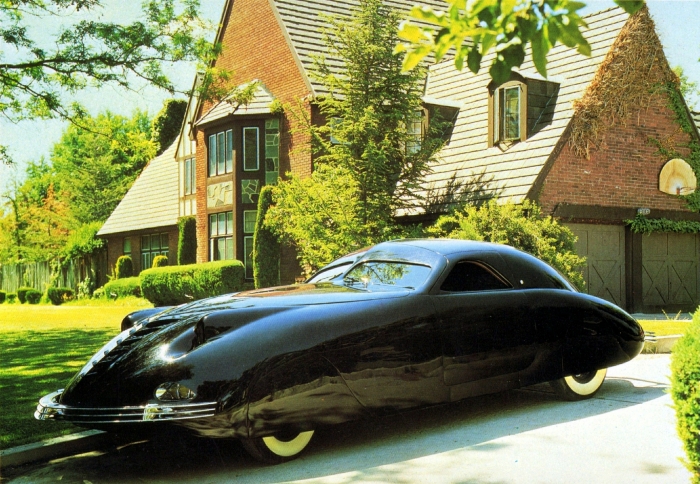 In their Story of the Week feature, the Motor Cities National Historic Area shares the story of the “different by design” 1938 Phantom Corsair:

The Phantom Corsair was one of the most unique automotive designs ever when it was introduced to the public in 1938. he model was designed by Rust Heinz, who once had a dream of what an American supercar should look like. Heinz was from the well-known family that made its fortune selling condiments like ketchup and mustard across the country.

The Phantom Corsair was intended for a limited manufacturing run and would have sold for $15,000 on the consumer market. However, that price was a problem for the Phantom Corsair since it was designed and engineered when most Americans were still struggling with the Great Depression.

The Phantom Corsair was a prototype 2-door model sedan. A clay scale model featured an aerodynamic shape that was sleek and futuristic. The model offered room for six passengers … Heinz’s parents disapproved in the beginning of his developing the Phantom Corsair. His aunt ultimately agreed to fund the project. Unfortunately, Heinz was killed in an auto accident in July 1939, and the Phantom Corsair project came to an end.

…For many years since, automotive writers and historians have said that “Although sometimes dismissed as a failure because it never entered production, the Corsair is regarded as ahead of its time because of its futuristic features and styling cues such as faired-in fender and a low profile.”

The Phantom Corsair prototype offered an electric push-button door operation, along with green tinted triple-layer safety glass windows, hydraulic impact bumpers, and fog lights for nighttime driving. The instrument panel offered a flush design with a dozen instruments that included a compass and altimeter. The interior offered an aviation design theme with a warning light that signaled when the door was ajar. Other features included a multi-wave radio with twin speakers plus a great air conditioning and heating system. The prototype model used a Cord V8 Lycoming engine with a front wheel drive transmission.

For a chance to really geek out on some wild automotive designs, have a look at Alden’s Concept Vehicles & Prototypes gallery on Flickr. 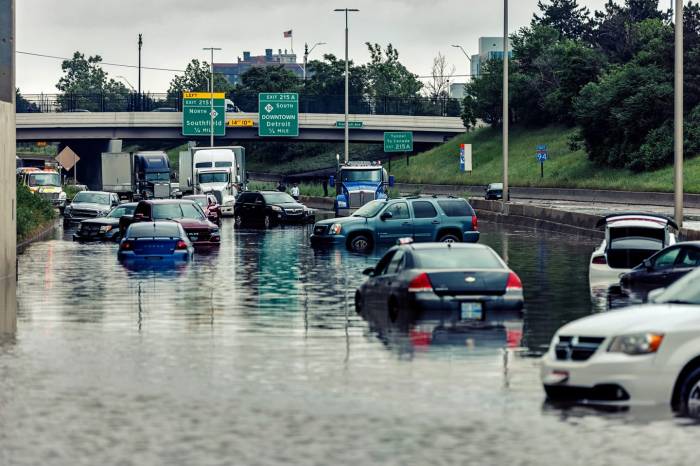 On Friday night as much as 7″ of rain fell in the city of Detroit creating a truly nightmarish situation as the New York Times reports:

Up to seven inches of rain fell early on Saturday in parts of Detroit and Wayne County, Mich., stranding hundreds of vehicles on flooded freeways and prompting the rescue of about 50 drivers, officials said.

“This isn’t normal here,” said Lt. Michael Shaw, a spokesman for the Michigan State Police. “Every freeway in the county had some level of flooding.”

By 3 p.m. Saturday, the authorities counted about 350 vehicles that had been damaged in the flooding.

“Some suffered some type of wire damage, some had water up to the top of their tires, some had it up to windows, and some were completely submerged,” Lieutenant Shaw said. “A lot of people thought they could make it through the water, but there was just no way.”

You can see some shots reader-submitted shots from across the city at Click on Detroit.

The photo was taken Saturday on I-94 aka the Edsel Ford Freeway by Joe Gall aka Camera Jesus. Click the pic for several more shots, follow him @camera_jesus on Instagram & for sure check out his website to view and purchase his work!

More Michigan flooding including the Detroit Flood of 2014 on Michigan in Pictures. 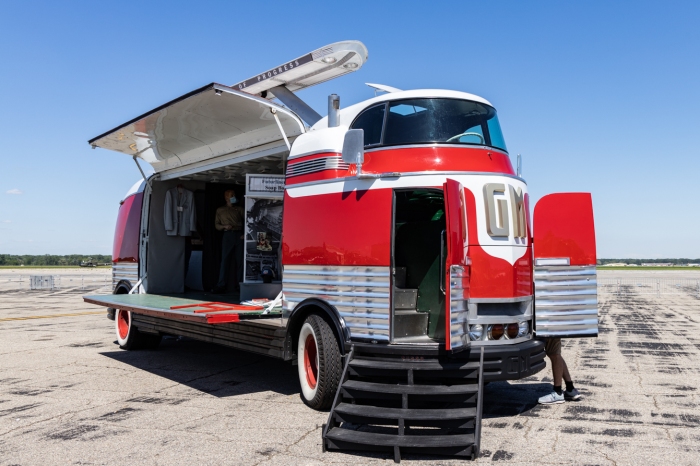 Wikipedia’s entry for GM Futurliners explains that these wild custom vehicles were designed in the 1940s for General Motors by the legendary Harley Earl:

Originally manufactured for the 1939 New York World’s Fair, the Futurliners were later featured in GM’s Parade of Progress, a promotional caravan travelling a 150-stop route across the United States and Canada. The Futurliners, along with 32 support vehicles, were driven by 50 college graduates, who also staffed the exhibitions along the route.

Typically arranged at each stop around a large tent and an information kiosk, each Futurliner featured a self-contained stage as well as a prominent deployable light tower, and each vehicle featured a particular subject. The mobile exhibition covered such topics as jet engine technology, agriculture, traffic engineering, stereophonic sound, microwave ovens, television and other innovations.

There are only nine of these left & the last one to sell sold for a cool $4 million!! Photos & more info at Wikipedia. You may also enjoy the many pics & stories including a restoration project at Futureliner.org. 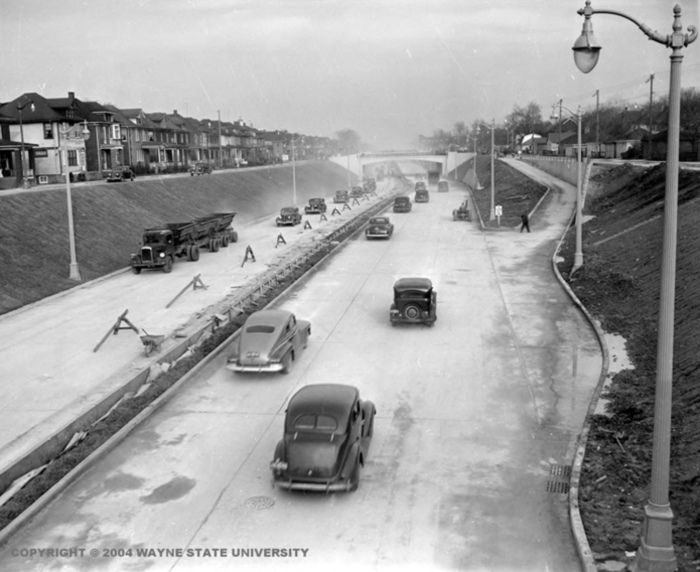 The Daily Detroit is one of my favorite Michigan podcasts, and their story on The Davison, America’s First Urban Freeway in Detroit is pretty cool:

While freeways are pretty standard in American cities now, it wasn’t always that way. Instead of the ability to potentially go up to 70 miles an hour like on today’s highways, motorists had to use regular city streets to cross town. That was especially the case for motorists who wanted to cross Highland Park and enter Detroit.

Everyone piled onto Davison Avenue, the only large street that ran through Highland Park and connected to Detroit running roughly east to west. The avenue and freeway was named after an English immigrant from the 1840s that settled in the area, Jared Davison (it was then Hamtramck Township). His farm was approximately between Woodward and Oakland avenues along the south side of the street.

It wasn’t uncommon for drivers to spend 15 minutes sitting in traffic to reach Detroit. By 1940, thanks to Detroit’s growth and the growth of auto factories, Davison Avenue was approaching gridlock during rush hour by 1940.

…By November 1942, the five and a half mile long Davison Freeway was finished. It opened without a dedication ceremony, probably due to the desperate need the defense plants had for a functioning freeway. Despite its lack of dedication, the freeway became the first one of its kind – an urban freeway meant to connect one part of a metro area with another with as little interruption as possible.

…Ironically, the invention from Highland Park eventually played a key role in emptying the city out. In 1992, Chrysler moved their headquarters down the road – off of I-75 with a special off-ramp built for the development – to Auburn Hills, to follow the trend of suburban sprawl that the American highway system helped enable.

Read more at the Daily Detroit! 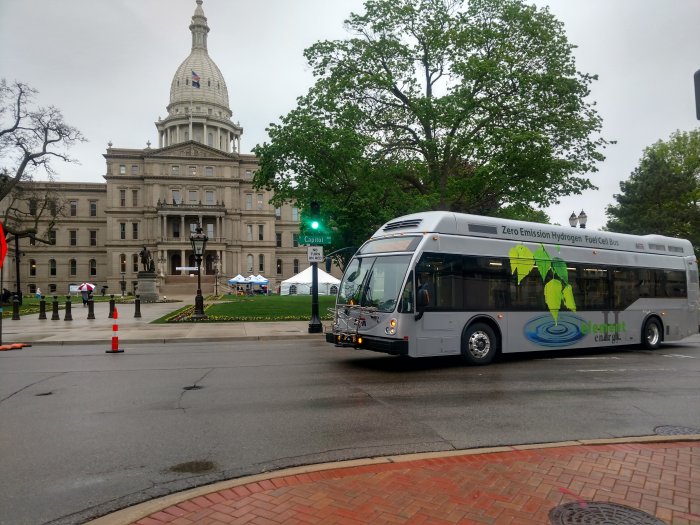 Hydrogen Bus at the Capitol by MTA Flint

Beneficiaries of the program choose electric, alternative fuel or new diesel models, said Nick Assendelft, a public information officer for the Michigan Department of Environment, Great Lakes and Energy. The first round of funding will provide $16 million to replace outdated freight trucks and buses with new models. At least half of that is earmarked for electric vehicles.

…Some organizations are already transitioning their fleets to alternative fuels. Over the past 11 years the Mass Transportation Authority of Flint and Genesee County has reduced annual diesel fuel use from 1.4 million gallons to 30,000 gallons. The public transportation agency has done that by converting its fleet to run on compressed natural gas, propane and hydrogen, said Edgar Benning, the authority’s chief executive officer.

Fueling a hydrogen bus costs about twice as much as fueling a diesel bus, Benning said. In return for the extra cost, you get almost double the mileage. Along with the performance and the maintenance of the vehicles, you really pick the cost up on the other side, Benning said.

Alternative fuel vehicles make up 95% of the authority’s fleet. They provide fixed-route busing along with transportation services for seniors and people with disabilities. The authority also has about 200 cars to provide non-emergency medical transportation.