SPARTANS!, photo by Mario.Q
Drew Sharp writes that while the Legends and Leaders divisions were designed to showcase “the Big Four” of UM, Ohio State, Nebraska and Penn State, it’s two of the afterthoughts who meet in the first ever Big Ten title game this Saturday night (Dec 3) at 8:17 PM on FOX.

With a record of 7-1, MSU won the Legends Division this year. Their wins included a surprise upset in the first meeting with the Wisconsin Badgers, and you can relive the miracle catch on YouTube. You might also enjoy MSU Head Coach Mark Dantonio’s press conference yesterday and this preview from Green & White.

Mario took this shot at the MSU/Wisconsin game. Check it out bigger and in his slideshow.

More MSU on Michigan in Pictures!

In just a few hours, the University of Michigan Wolverines and Michigan State University Spartans will meet for the 104th time for rights to the Paul Bunyan Trophy:

The annual Michigan-Michigan State game gives the winner state bragging rights, an inside track to a bowl game, and last, but certainly not least, ownership of the Paul Bunyan – Governor of Michigan Trophy.

Presented for the first time in the 1953 meeting between the Wolverines and the Spartans, the Paul Bunyan Trophy is the lesser-known of Michigan’s two annual trophy games, shadowed by the nationally recognized Little Brown Jug Game between Michigan and Minnesota.

The Bunyan Trophy was put into circulation by then Michigan Governor G. Mennen Williams. The prize consists of a four-foot wooden statue of the legendary Paul Bunyan astride an axe with feet planted on a map of the state of Michigan. Two flags — one with the Michigan “M” and the other with the Michigan State “S” — are planted on either side of Bunyan. A five-foot stand supports the statue.

The Brown Jug is old news, because the game puts 1st place in the new Legends division of the Big Ten on the line, and both programs are in the top 25. Get a picture of the trophy along with all the links & history on the Michigan vs Michigan State Football Rivalry page on Absolute Michigan.

The photo of Michigan quarterback Denard Robinson being dropped for a loss by MSU’s Chris L. Rucker was taken by Lon Horwedel of AnnArbor.com in last year’s 34-17 Spartan victory. Check this out on black and in AnnArbor.com’s excellent slideshow from last year’s Michigan vs MSU game!

The Big Chill, photo by andykee.

On Saturday, December 11 2010 the University of Michigan Wolverines met the Michigan State University Spartans in The Big Chill at the Big House (Wikipedia entry). AnnArbor.com pegs the crowd at a world-record smashing 113,411 who saw the Wolverines pummel the Spartans 5-0.

It’s not the first time UM/MSU have set the record. In October of 2001, the 2 programs met at Spartan Stadium in The Cold War which drew almost 75,000 who saw the teams skate to a 3-3 tie. Check out this video of the record-setting crowd and here’s the highlight reel from the game.

See the photo bigger in Andy’s slideshow and check out AnnArbor.com’s slideshow from the event.

Tomorrow is 10/10/10. While it could be that something catastrophic or wonderfully amazing happens, if it doesn’t you may be looking for a few things to fill the time.

The University of Michigan Wolverines meet the Michigan State University Spartans at 3:30 PM today. MSU has won the last two meetings and both teams are undefeated and in the AP Top 25, with the Spartans at #17 and UM ranked #18. Tomorrow, green & white or maize & blue will have something to crow about … and the Paul Bunyan Trophy. While State is my alma mater and 2nd favorite college football team, I’m going to side with my dearly departed grandmother and a childhood of 3 yards and a pile of dust with Bo and say Michigan 35 – State 32 as Denard Robinson continues his campaign for the Heisman right over Greg Jones.

October in Michigan means apples and cold nights and fall color and haunted houses. Dig in.

October 10, 2010 is being promoted as a global work party by the 350 Movement. Simply put, 350 is the parts per million of CO2 that science says will roll back global warming. Plant some trees, explore going solar, lay plans for transforming your business to meet the challenges of the future, get out with friends on your bikes or find another way to say “Michigan is in this for the long haul”

Check Cory’s photo out bigger and see this and more in his slideshow.

The Paul Bunyan-Governor of Michigan Trophy is awarded to the winner of the game between the Wolverines and the Spartans. U of M holds the series edge at 67-30-5, but the Spartans have held the trophy for the past 2 years. Right now both teams are in the AP Top 25, with the Spartans at #17 and UM ranked #18.

If you’re looking for tickets, stubhub has them for $175 – $1422. If you can’t swing that, it’s on ABC with the pre-game at 2:45 PM. The .00007% of Lions fans who are missing Matt Millen will be happy to learn that Millen has been picked as an analyst for the game by ABC. Millen won’t be the only coach in the press box because MSU coach Mark Dantonio (recovering from a heart attack) will be in the box as well.

Click through for more on the game including videos highlighting both programs.

You can see more of the Wolverines in Steve’s Michigan Football 2010 slideshow and get your Spartan on with State News photographer Matt Hallowell’s football slideshow!

Wikipedia says that the Michigan State Spartans Men’s Basketball Team has been in the Sweet Sixteen 9 of the last 13 years. In all, Michigan State has won two NCAA Championships, appeared in seven Final Fours and made 23 NCAA Tournament appearances.

On Friday, the MSU Spartans take a 26-8 record into a game with the 2010 Cinderella, the Northern Iowa Panthers.

Be sure to check this out background bigilicious or in Miguel’s slideshow.

Be sure to also check out more posts about the MSU Spartans from Michigan in Pictures!

This photo is one of many in Ben’s Red Cedar Log Event Photos set ( slideshow).

Eric has a great set of photos from the Spartans Final 4 Welcome Home event at the Breslin (slideshow).

You can get the latest MSU Spartans basketball on Flickr.

If you have a favorite picture of Izzo’s crew (and Merchant’s too!) please add a link to it in the comments below.

Since spring is apparently canceled, Rhonda’s photo of the People Mover Station in Detroit is the best I could do in bringing the green.

Well … there is this.

PS: If you like this photo, you can purchase a copy right here! 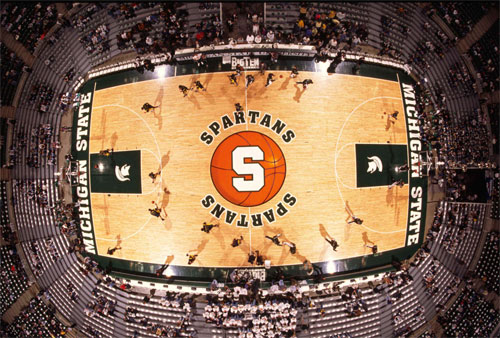 The Jack Breslin Student Events Center at Michigan State University was named in honor of Battle Creek native and MSU grad Jack Breslin. In 1989, it replaced Jenison Fieldhouse as the site for MSU men’s basketball and women’s basketball games. Wikipedia’s entry on the Breslin Center says that although the arena nominally contains 16,280 seats, seating is about 15,000 for most events.

The arena’s current basketball court is the same floor where the Spartans won the 2000 NCAA Men’s Tournament, which was at the RCA Dome in Indianapolis. The school purchased the floor from the NCAA and Final Four floor installer Horner Flooring (based in Dollar Bay, Michigan) after the title game, and had a plaque installed on the baseline near the Michigan State tunnel to commemorate the floor’s purpose in the school’s history.

I’m not entirely certain who jgeorge is, but they have uploaded the photo above large enough for great wallpaper and have many more MSU sports photos.

For more pictures, check out a Flickr search for Breslin Center, the MSU Basketball set by Blackbeard Ben and this incredible shot of the Breslin Center at MSU’s Convocation by Patrick T Power. The photo gallery at BeASpartan.com has a few photos from the Breslin including this beauty.