You can check out yesterday’s Eclipse 2017 post for Michigan-specific eclipse times, suggestions and links to livestreams from the eclipse in case clouds get in your way. For all your general eclipse needs, NASA’s Eclipse 2017 website has you covered!

In the event that there aren’t enough 8s for you on this August 8th, here’s a whole bunch more from the Urban Institute for Contemporary Arts in Grand Rapids.

The care of human life and happiness, and not their destruction, is the first and only object of good government.
-Thomas Jefferson

Happy 274th birthday to the principle author of our Constitution, Thomas Jefferson.

As we head into a recess where we all have a chance to speak with our elected officials, my personal hope is that many voices will be raised in support of this Jeffersonian ideal of good government that seeks to uplift and preserve our health and well-being, particularly in regards to our preserving & expanding access to health care, rebuilding our crumbling infrastructure, and ensuring that efforts to protect the Great Lakes aren’t defunded. You may want something different, so you probably should show up and share your thoughts as well! ;)

PS: This is the detail of the hand on the Spirit of Detroit by noted sculptor Marshall Fredericks and you can click that link for much more! 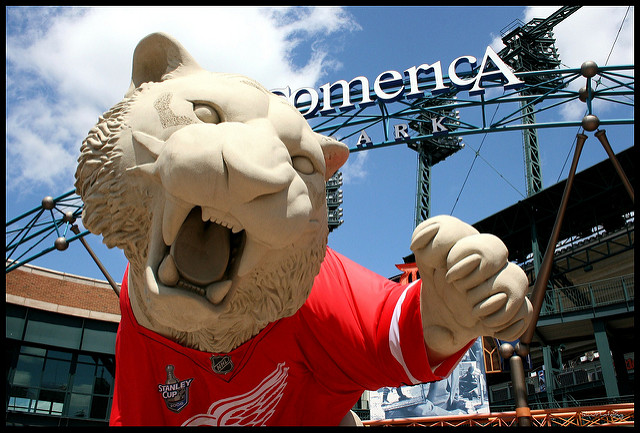 Mike Illitch, owner of Little Caesar’s Pizza, the Detroit Red Wings, and the Detroit Tigers has passed away. I could link to a lot of articles, but I think the tweets about Mike Illitch are the most powerful things I’ve seen. Here are some I like and please share your own comments.

The Joe holds a moment of silence for Mr. Ilitch who passed away at the age of 87 this afternoon. pic.twitter.com/fpUZuvMRmc

Heartbroken hearing of Mr I's passing. He was a family man. A self made man. A giving man. An icon for our city and nation. #RIPMrIllitch

A moment of silence for Mr. Illitch prior to tonight's game. pic.twitter.com/i3K1JEaDOm

Mike Ilitch, one of the most famous Detroiters of his time, died today at the age of 87. https://t.co/zFzSAFQkdI pic.twitter.com/4EVjcrq0sC

"That's the one thing we were always brokenhearted about," Leyland said about Ilitch. "That we didn't get that World Series for him."

Mike Ilitch wrote me back when I was four years old and wanted to be a hockey player pic.twitter.com/klqWdSnKMk

The thing I respect most about Mike Illitch: He was completely self made. No family money, no lucky lotteries.

View Cori’s photo bigger and see more in her I LOVE DETROIT slideshow.

More Red Wings and more Tigers on Michigan in Pictures.

The sculpture is “Martin Luther King” by Lisa Reinertson and her site includes an article about the sculpture:

A bronze portrait figure of Dr. Martin Luther King, Jr. strides forward confidently in a small park in Kalamazoo, Michigan. The statue, created by sculptor Lisa Reinertson, is only slightly larger than real life, but its presence is monumental.

Seen from a distance, the clerical robe worn by Reverend King strengthens the tall, pyramidal composition, while the robe’s flowing contours both animate the design and echo the character of this restless minister who was constantly on the march for freedom and justice.

Upon approaching the sculpture, which the viewer is drawn to do by its placement on a simple low pedestal, one sees that the robe is embellished with scenes from the civil rights struggle rendered in low relief. A black slave labors in a field near the hem of the robe, while a dark fold of the garment reveals the lynching of a man by the Ku Klux Klan. A Montgomery city bus and a portrait of Rosa Parks adorn the lower left side. The Selma to Montgomery march and King’s I Have a Dream speech are depicted elsewhere. One also finds images of voter registration, school desegregation, the Greensboro, North Carolina lunch counter sit in, and the use of firehoses to break up the peaceful 1963 Birmingham demonstrations. Down King’s broad back the vertical folds of the cloth evolve into the bars of the Birmingham Jail with a pensive King seated behind them. Above him is the image of Mahatma Gandhi, who inspired King’s use of non-violent civil disobedience.

More about Martin Luther King on Michigan in Pictures.

The Spirit of Detroit, photo by walker_bc

And now we welcome the new year. Full of things that have never been.
-Rainer Maria Rilke

Happy 2017 to everyone. While there’s certainly a lot of alarming winds swirling, I hope that some of Rilke’s things that have never been make us all better, stronger, and safer.

View Walker’s photo of the Spirit of Detroit background bigtacular and see more in his slideshow.

More about the Spirit of Detroit on Michigan in Pictures.

View Ryan’s stunning shot of the Detroit Skyline from Belle Isle bigger on Facebook, see more in his Nights in Detroit slideshow, and if you’d like him to apply his mad photography skills for your wedding or engagement, head over to ryansouthen.com.

In the spring of 1712, the English sent a war party of Fox & Macoutin to try and take Fort Pontchartrain in Detroit from the French. Over 1000 were massacred by tribes loyal to the French near Windmill Point at the mouth of the Detroit River on Lake St. Clair, effectively destroying the Fox nation.

My new favorite book, Legends of Le Détroit by Marie Caroline Watson Hamlin with illustrations by Miss Isabella Stewart, details the episode. If I were you, I would click over to the book right now and read it there – it’s not nearly as long as Tuesday’s tale ;)

Years after the dreadful massacre which converted the beautiful spot called Presque Isle into the grave of the Fox nation, a stone mill was built there by a French settler, who came to reside with his sister Josette, undaunted by the ourrent traditions which peopled it with the spirits of the departed warriors. Jean was a quiet, morose man, different from the laughing, careless, pleasure-loving Canadian, — for rare were his visits, to the fort, and it was noticed that he never lingered over his cidre, nor spoke to the smiling, piquante daughters of the habitants.

…Josette was much older than her brother, and by dint of thrift and economy had saved enough to become a half owner in the mill. … Naught disturbed the monotony of their lives ; each day was but a repetition. The river flowed calmly on, the birds sang their songs – for nature has no moods, they belong to man alone.

At last Josette fell sick. Jean attended her as carefully as he could, and like a prudent man, would frequently ask her to whom she would leave her interest in the mill. Irritable from suffering, she became annoyed at his importunities, accused him of taking care of her for the sake of obtaining her money, and told him ‘she would leave it to the devil.” Jean tried in his clumsy fashion, to soothe her. He sent for some of his kindred to reason with her, but they only infuriated her the more, and she solemnly declared that not one of them should have her share in the mill, but “she would sooner leave it to the devil.”

Josette recovered, however, and with that perversity born of stubbornness, would not relent. A few months afterwards she was found dead in her bed, having died suddenly. That same night, whilst the candles threw their dim shadowy light in the room of the dead, a furious storm arose, lashing the waves against the shore, the winds howling fiercely around the point, the black clouds chasing each other across the lowering skies, as lurid gleams of lightning and deafening reverberations of thunder, made all the habitants shudder while they crossed themselves and told their beads. All at once there came so tremendous a shock that it seemed to swallow the island. The old stone mill was rent in twain. A pungent smell of sulphur filled the air, and a fiendish, laugh was heard loud above the raging storm from the shattered ruins. The arch fiend had come to claim his share.

For years afterwards when a northeast storm blew from the lake, making night hideous by its echoing peals of thunder, it was said that a hairy figure, with a horned head and forked tail tipped with fire, his mouth and eyes darting forth ruddy flame, could be seen in the mill, trying to put together the ruined machinery to grind the devil’s grist. And the lonely wayfarer to Grosse Pointe would see the marshes around Presque Isle all illuminated by flames, called by the hab- itants feu-follet (Will-o’-the-Wisp), which would try to inveigle the unhappy traveler and bring him to help grind the devil’s grist.

View the photo background big and see more of Gary’s haunted photos at that link. 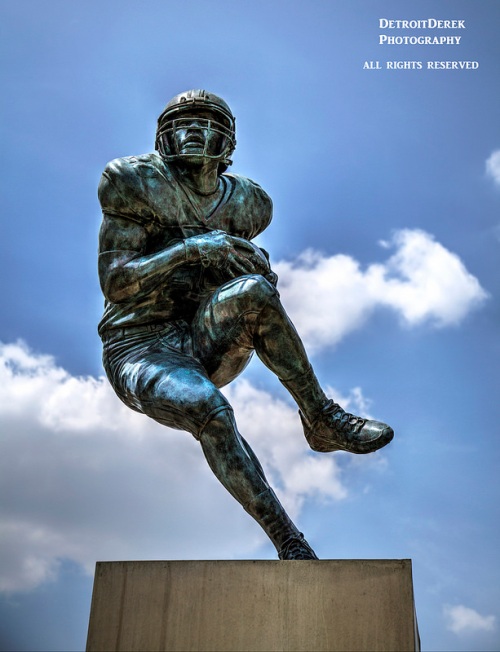 Today is my little brother Shep’s birthday. He loves sports, the Detroit Lions and most definitely #20 Barry Sanders.

While Lions rookie #21 Ameer Abdullah has a long, long way to go to get into Barry Sanders territory, he made some runs that certainly remind you of someone. Check out this highlight reel from Ameer’s first pre-season game.

Derek took this photo of the statue of Barry Sanders outside the Detroit Athletic Club. View it bigger and see more in his massive Detroit slideshow. 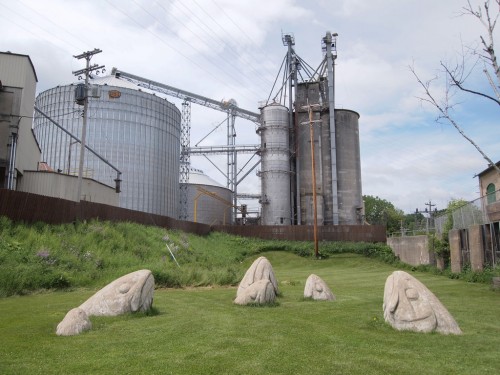 These fish heads are located at Newaygo’s Riverside Park. No idea why, but if you want to check them out, Roadside America has the location.