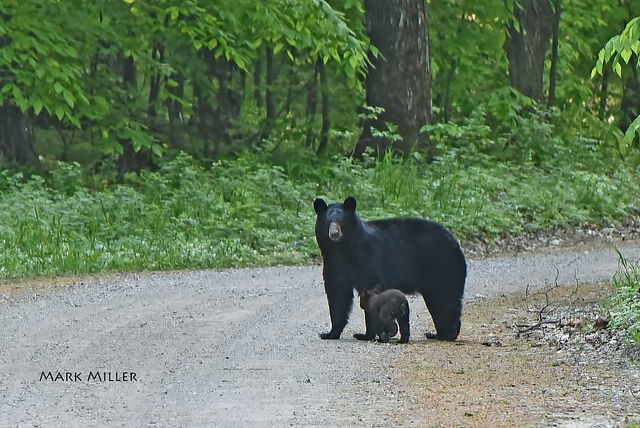 The Detroit Free Press reports that the black bear population is booming in northern Michigan:

The black bear population has risen 29 percent in the region since 2012 and almost 50 percent since 2000, according to wildlife management specialist Kevin Swanson of the Department of Natural Resources.

About the photo, Mark says: After yelling a quick “hey” at mama to get her to turn around, there was a moment that I wondered if I had done a dumb thing. I was about the same distance from the house, as she was to me (100 yds.) I guess me and my Nikon didn’t pose much of a threat, as they slowly went on their way.

View the photo bigger and see more in his In My Backyard slideshow.

PS: I realize that back in May of 2015, I featured another photo of this pair along with general info about black bears in Michigan.

Recently there have been several reports of black bear sightings in Michigan, in traditional ranges like Leelanau County where these bear were photographed and even as far south as the state line in southwest Michigan and Washtenaw County, where  The Hastings Banner shared that while some are escapees from private facilities, others are ranging south:

…The Saginaw County bear is the southernmost collared bear in Michigan. Other collared bears south of traditional Michigan bear country include a male that was trapped and collared outside of Whitehall in orchard country, as well as a sow with cubs in Newaygo County, and a male in Oceana County. “We got a good break getting this bear collared this far south,” said Etter, who is studying how bears disperse in southern Michigan.

In recent years, bears have been documented in Washtenaw, Ionia and Ingham counties. “There was a bear sighted just north of Lansing several years ago,” Etter said. “We have photos of tracks from Sleepy Hollow State Park in April.

Read on for more including how they tranquilized and collared the Saginaw in an effort to learn more about bear movements. The DNR’s Living with Bears page shares some good tips for staying safe:

With the exception of baiting for hunting purposes in remote areas, placing food to attract bear near homes, cottages, parks, campgrounds and picnic areas may teach them to associate people with food. This may place them and people at risk of injury.

Black bear have enormous appetites and an excellent sense of smell, and are capable of remembering the locations of reliable food sources from year to year. They will travel great distances to find food. When natural foods such as tender vegetation, nuts, berries and insects are scarce, bear are likely to come into contact with people. Problems occur when bear attempt to feed or actually feed on human foods, garbage, pet foods or birdseeds.

Although most bear are secretive and shy by nature, they will tolerate contact with people when their natural food is scarce. Because they are large and powerful animals, they must be respected.

Black bear are generally fearful of humans and will leave if they are aware of your presence. In the rare circumstance that you encounter a bear that does not turn and leave, first try to scare it off by yelling while leaving a clear, unobstructed escape route for the bear. If the bear stands its ground, makes threatening sounds or bluff charges, you are too close. Take slow steps backward while continuing to talk to the bear in a stern tone. In the rare event of an attack, fight back with a backpack, stick or your bare hands. Black bears have retreated in similar situations.

Mark took this photo on the Leelanau Peninsula and wrote: When my neighbor called me early on a Saturday morning to tell me a bear was heading my way, I had to go looking for him. View his photo bigger and see more in his In My Backyard slideshow.

Want to know more about bear cubs with triple the bear cuteness? Check out Bear Triplets on Michigan in Pictures! 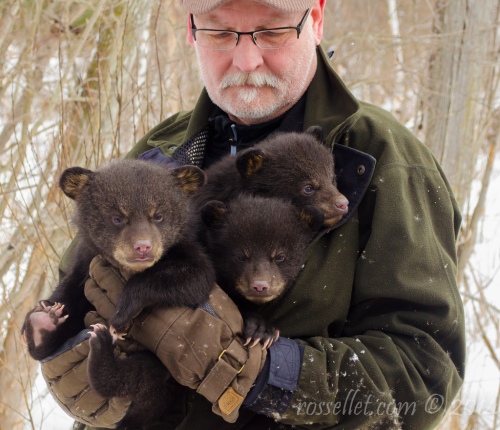 I feel like the one on the left says everything I have to say about snow, cold and Winter. Here’s three facts from the DNR’s Michigan Black Bear Facts page – click through for more:

What is the status of black bear in Michigan?

Approximately 15,000 – 19,000 black bears (including cubs) roam the hardwood and conifer forests of northern Michigan. About 90 percent of the bear live in the Upper Peninsula, while the remaining ten percent are mainly found in the northern Lower Peninsula. However, it is becoming increasingly common to see bear in the southern half of the Lower Peninsula. …

When do bear breed?

Breeding takes place in June and July and cubs are born in early January while females are in dens. A litter may consist of one to four cubs, with two or three cubs being most common. An adult female bear usually breeds every other year, but may mate in consecutive years if cubs are lost before mid summer. A female bear will generally breed for the first time at 2’/z years of age in the northern Lower Peninsula, and at 3’/2 years of age in the Upper Peninsula.

At birth, bear cubs weigh less than one pound, but mother’s rich milk helps them grow quickly. Mother and cubs emerge from the den in spring, with the cubs weighing up to ten pounds. Cubs are under the watchful eyes of their mother throughout the summer and fall seasons. As autumn nears its end, the female once again searches for a suitable den site for herself and her cubs. After emerging from the den the following spring, the adult female will stay with her offspring until she is ready to breed again in June. At that time, she aggressively discourages the companionship of these now yearling bear and they are forced to fend for themselves.

Baby black bears being held during a bear den visit in late March 2014. These baby bears are being counted, measured, weighed and analyzed so researchers can understand more about the overall health of the black bear population in Michigan. Researchers are also tracking their movement as some bears shift into southern Michigan.

View his photo big as a bear, see more in hisNature slideshow and view & purchase photos at rossellet.com.

More animals on Michigan in Pictures.