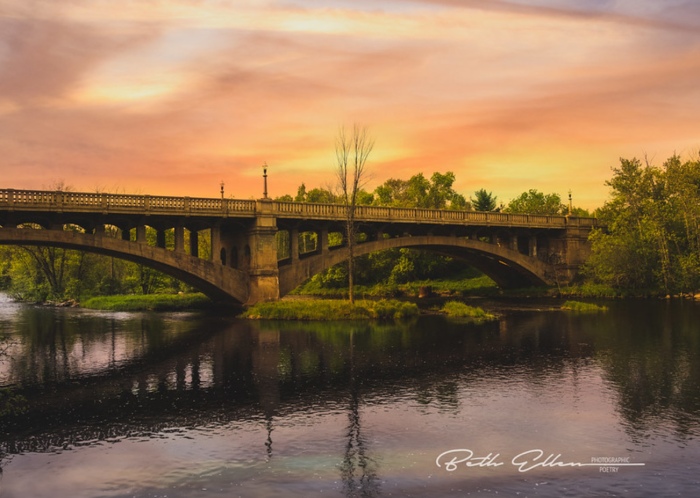 The Bridge by Fire Fighter’s Wife

“He that cannot forgive others breaks the bridge over which he must pass himself; for every man has a need to be forgiven.”
– Thomas Fuller

I simply love the photos paired with quotations that Beth shares. About this one she writes:

This is especially hard for me right now….forgiving others. I think when people hurt you, and they are not sorry, nor feel concern whatsoever for your broken heart, it makes it harder to forgive and forget. Trying to let go of the pain and trying not to let those stabs pain your heart is easier said than done, right? Sometimes we just have to let it go, not take it personally and move on.

In these times I have noticed more often that people are getting nastier. They are miserable and want to make others feel as awful as they do. All we can do is unplug. Distance ourselves from the hatred and surround ourselves with love. Don’t let the negativity destroy you!

Sending each on of my Flickr friends good vibes during these trying times! XO

I’ve never spent much time in Grand Rapids, but I have seen photos of this striking bridge across the Grand River. I wanted to capture the river as the sun went down. I love watching how quickly light can change. These three photos, all very different, were taken within 15-20 minutes of each other on Saturday, 6 March 2021. The photo above is the third in the series, taken at night with most of the light in the image now comes from the lights on the bridge, hotel windows and street lights.

Image 1: Just at sunset, you can see the warm tones from the last light on the buildings

Image 2: Blue hour – the sky almost balances the surface of the river perfectly

The International Bridge at Sault Ste. Marie is the only vehicular crossing between Ontario and Michigan within a 300-mile distance, connecting the sister cities of Sault Ste. Marie across the St. Mary’s River.

The Portage Lake Lift Bridge connects the cities of Hancock and Houghton, Michigan, USA, across Portage Lake, a portion of the waterway which cuts across the Keweenaw Peninsula with a canal linking the final several miles to Lake Superior to the northwest. US 41 and M-26 are both routed across the bridge.

The original bridge on this site was a wooden swing-bridge built in 1875. This was replaced by a steel swing-bridge built by the King Bridge Company in 1901. This bridge was damaged when a ship collided with it in 1905. The center swinging section of the bridge was replaced and a similar incident almost occurred again in 1920, but the ship was able to stop by dropping its anchor, which snagged on the bottom of the lake. In 1959, this bridge was replaced, at a cost of about 11-13 million US dollars (sources vary), by the current bridge which was built by the American Bridge Company.

As its name states, the bridge is a lift bridge with the middle section capable of being lifted from its low point of four feet clearance over the water to a clearance of 100 feet (30 m) to allow boats to pass underneath. The Bridge is the world’s heaviest and widest double-decked vertical lift bridge.Its center span “lifts” to provide 100 feet (30 m) of clearance for ships. The bridge is a crucial lifeline, since it is the only land based link between the north (so-called Copper Island) and south sections of the Keweenaw peninsula.

You can view the photo & more on Eric’s Facebook page and see a stunning shot of a rainbow over the bridge & more from Eric on Michigan in Pictures. 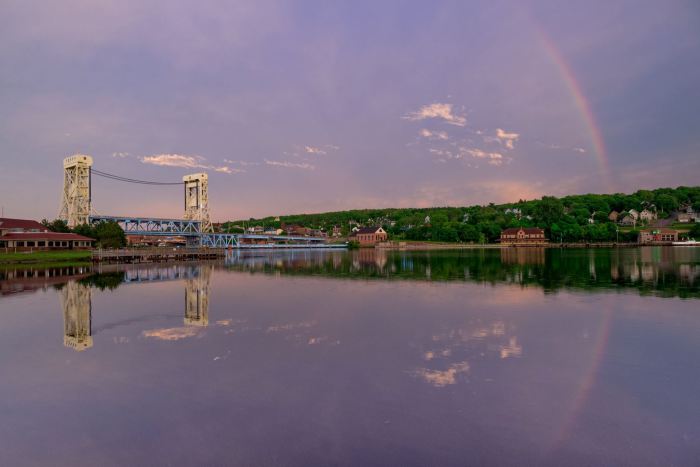 My position is that should take your rainbows as they come – here’s a beauty featuring the Portage Lake Lift Bridge in Houghton taken this Sunday!

View the photo bigger and see more in Eric’s Chasing the Rainbow album on Facebook.

Liz says she drove two-and-a-half hours last June to get a burger at the West Pier Drive-in (though she really went for the view). Check out her photo bigger and see more in her awesome Abstracts slideshow.

Crossing Over, photo by Terry Johnston

Here’s hoping that everyone has a safe journey this Thanksgiving. The Freep reports that Thanksgiving 2016 is shaping up to be a busy one for holiday travel:

AAA says it expects that more than 1.5 million people in Michigan will travel 50 miles or more from home this Thanksgiving holiday.

The auto club says Tuesday it would be the most travelers since 2007 and a 2 percent increase from last year. Reasons cited include improvements in the economy during the second half of the year, including rising wages, increased consumer spending and consumer confidence.

Check Terry’s photo which was coincidentally taken back in November 2007 bigger and view more in his Manistee slideshow. 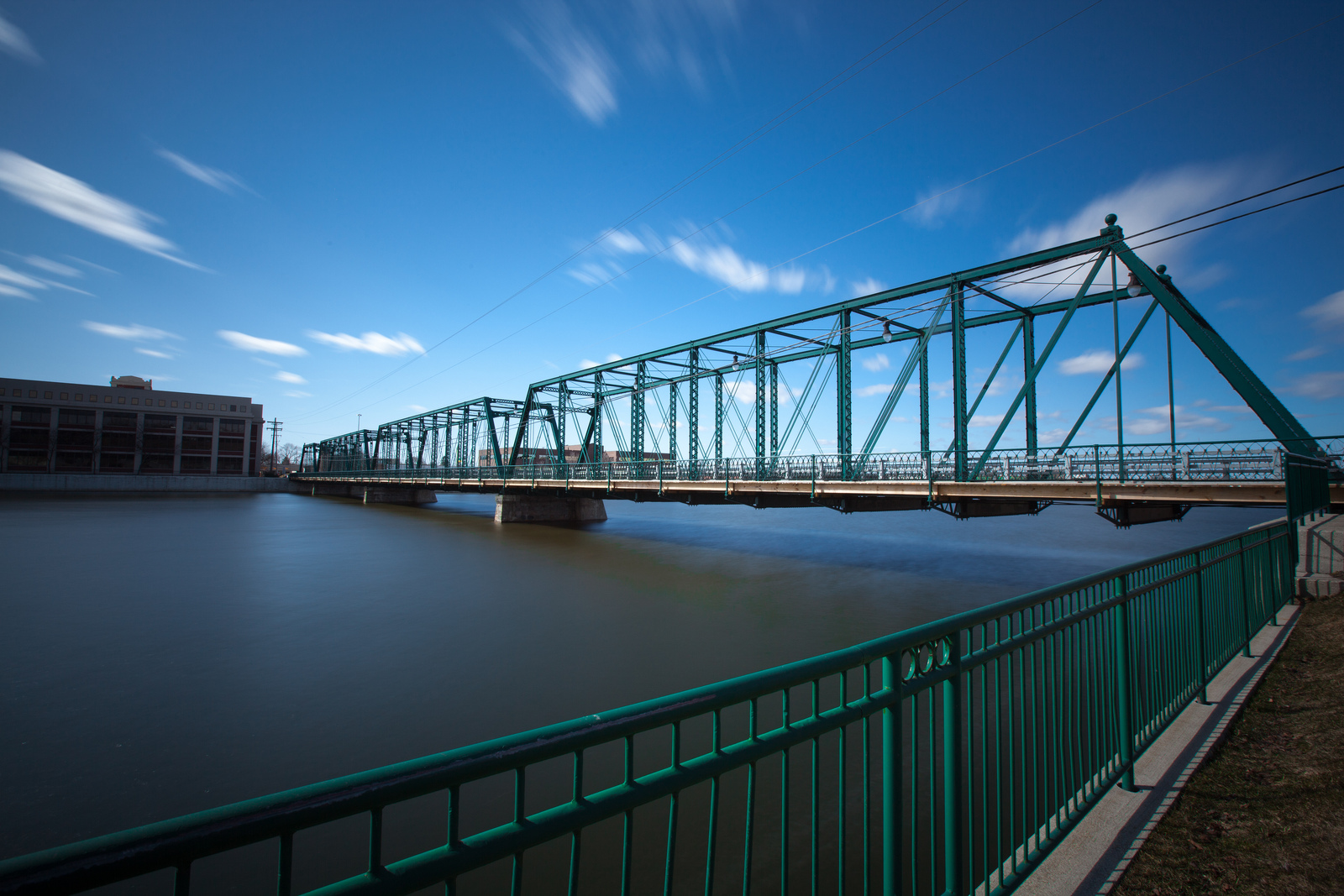 News that the Michigan Department of Transportation is testing drones for bridge inspection reminded me that I was asked to share more of were “bridges other than than the Mackinac Bridge.”

Historicbridges.org is an excellent resource, and their entry for the Sixth Street Bridge in Grand Rapids begins:

The Sixth Street Bridge, with its long 544 foot length excellent physical condition, is a fitting tribute to its builder, the Massillon Bridge Company of Massillon Ohio. Constructed in 1886, this bridge is made of wrought iron. This bridge is one of the most important historic bridges in the entire state of Michigan, since it is the longest pin-connected highway truss in the state. Also, Michigan only has a few truss bridges that are more than one span in length, and most of those are two spans. A four span bridge in Michigan is thus extremely rare for its unusually long length, for Michigan. The bridge is also significant for the length of its individual spans. The bridge has three spans that are 154 feet in length. This is a very long span length for a pin-connected Pratt truss, and is among the longest in Michigan.

…Construction of the bridge began in 1885, when the piers and abutments were constructed. These, with approaches, cost $11,084.95. The wrought iron truss superstructure was erected in 1886 by the Massillon Bridge Company of Massillon, Ohio, costing $20,281. This made the total cost of the bridge $31,365.95.

Read on for much more.

Rudy adds that this is the oldest metal bridge in Michigan. View his photo bigger and see more in his Neutral Density slideshow.

One of the requests I recently received was for more yesterday and today features The City of Hancock has a truly excellent series of in-depth pictorials. You should really check them out! Their feature on the Portage Lake bridges says (in part):

In 1897, the Mineral Range Railroad Company built a new iron swing type bridge, replacing the old wooden bridge. This bridge also featured a two lane roadway, with a railroad crossing underneath. New reconstructed support cribs were also sunk. But on August 15, 1905, disaster struck, when the steamer Northern Wave (Mutual Transit Lines), en route to the Quincy Smelter to pick up copper ingots, smashed into the center section, destroying much of it. The mishap was apparently caused by a mixup in signals.

The bridge would be replaced one year later, again with an iron bridge, and center swing section, and a control house above the roadway, over the center turnstile. This new bridge would have 118 ft. of clearance on the north maritime passage, and 108 ft. on the south side passage. (Newspaper accounts of the period, gave maritime traffic at 6,000 bridge openings per year, and up to 40 daily train crossings per day, both of which began to taper off by 1920). Although almost struck again in 1940 by the Steamer Maritana (Hutchenson Lines), it narrowly avoided the collision by dropping its anchors which caught the submarine telephone cables, stopping it just short of the bridge. (This would happen again 20 years later). Light signaling was added during WWII, to augment the steam whistles already in use. The bridge served the communities until 1960.

In the late 1950s, the Michigan Department of Transportation began studies on how best to replace the aging bridge, with a more modern one, that would accommodate the now much larger ships plying the waterway. It was decided to build what would be become the worlds heaviest aerial lift bridge, which was under construction by 1959, just to the West of the then current bridge. This new bridge, with 4 traffic lanes above, and a railroad crossing below, had its ribbon cutting on Saturday, June 25, 1960. But it almost didn’t happen. During the night before, the Steamer J.F. Schoelkoff (American Steamship Company), traveling westward, signaled for the bridge to open, but the signals were not acted on. Dropping all their anchors, they snagged the submarine telephone cables in an eerie repeat of 20 years previously. Onlookers for the ribbon cutting ceremonies were treated to the spectacle of a large freighter jammed crossways in the waterway, just a quarter mile from the Bridge. Area phone service was disrupted for nearly three days. Telephone service to the bridge, and marine radios were installed shortly. That incident not withstanding, the new Portage Lake Lift Bridge continues to well serve the area, as the possibility of adding yet another new bridge may be explored.

Read on for more!

You can purchase this photo on Robert’s website and see more in his slideshow. 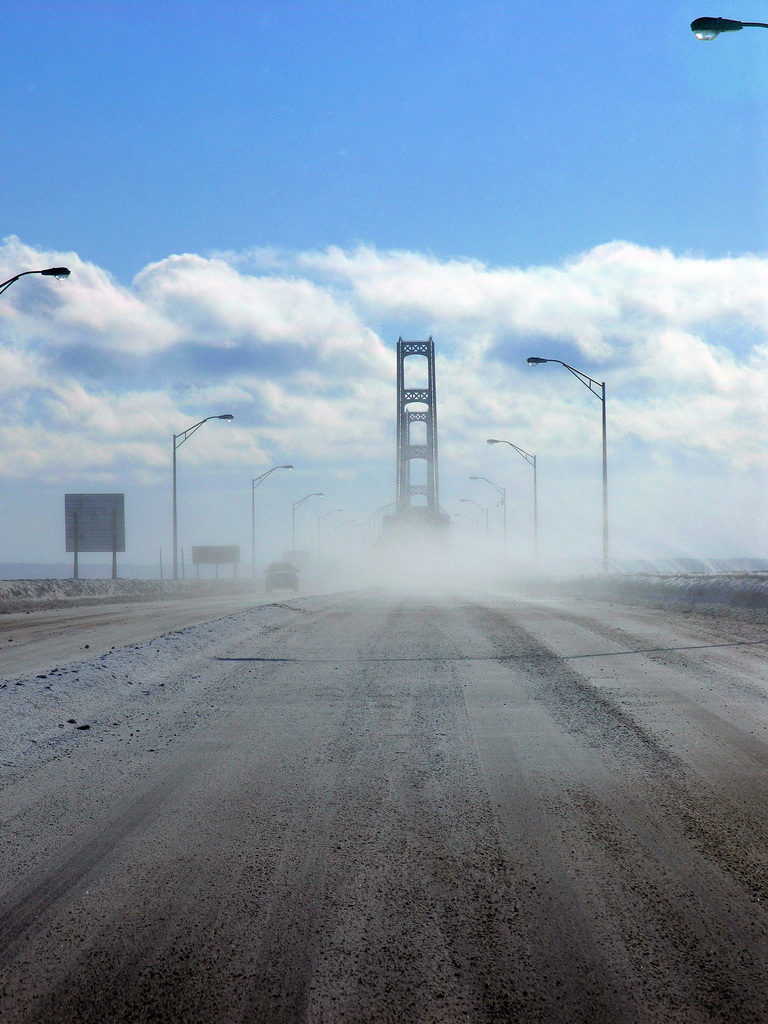 Fun fact of the day: I have a mild fear of heights! While it’s not crippling enough to stop me from being able to drive over the Mighty Mac, I can definitely see where some people aren’t able to do that. For all of you, here’s a story (with a good video) about a little known service: The Mackinac Bridge Authority will drive you across!

The Mackinac Bridge Authority has a “Driver’s Assistance Program” that provides drivers for those uncomfortable with driving across the Mackinac Bridge. If you are traveling northbound, there is a phone at the south end of the bridge. Instructions for using the phone are posted in the phone box. If you are southbound, just ask a fare collector for assistance. There is no additional fee for this service.

The phone is located on the shoulder of I-75 just north of the Jamet Street exit to Mackinaw City (near Audies Restaurant). You do not need to exit the freeway. Just past the exit, you can pull over to the right and park on the shoulder. The phone box is located on the right-of-way fencing. The box is green and easily spotted. If this is still unclear, please call us at 906-643-7600.

Lots more about the Mighty Mac on Michigan in Pictures.