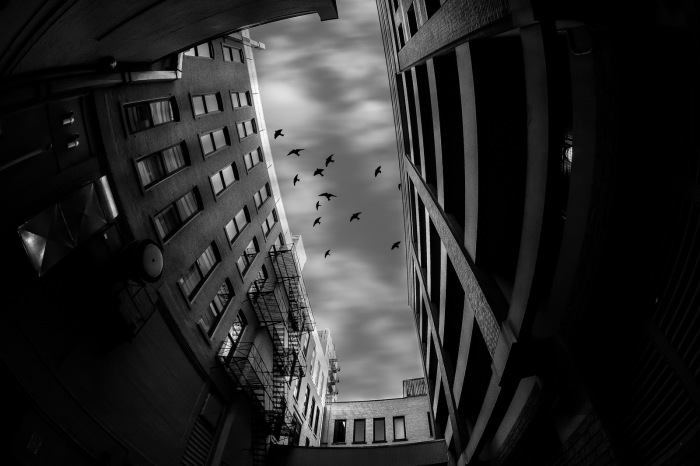 Jerry writes Tonight’s image is brought to you by the darker side of reality. Things are not always sunsets and rainbows. Shot taken with the Olympus EM5 Mark II and the Rokinon 7.5mm fisheye in grand rapids, Michigan

View his photo bigger, view work and read his thoughts on his website, and definitely check out Jerry’s slideshow for more! 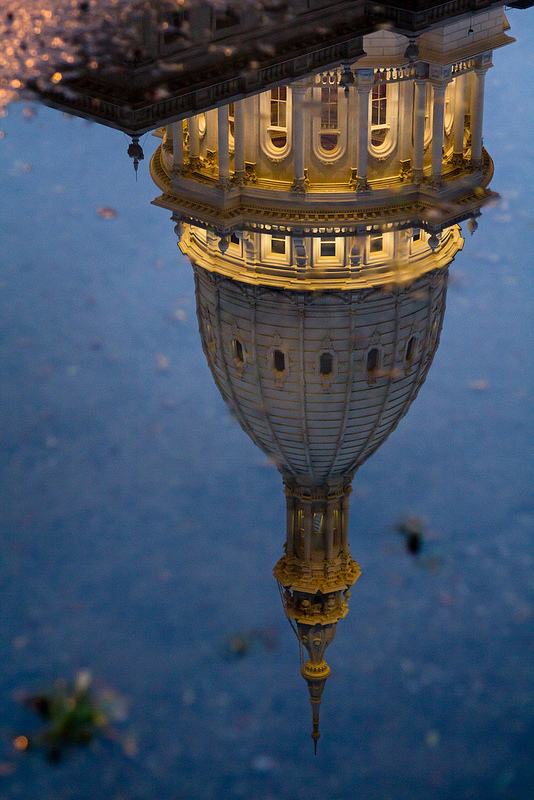 Whatever we feel about the outcome of this election, I think we can all agree that it’s nice to not have politics in our face for a few minutes.

View Matt’s photo bigger and see more in his slideshow.

Fly By, photo by Tom Hughes

Historic Detroit is definitely one of the best websites if you want to dig deeper into the history of Michigan’s largest city. Dan Austin’s entry on the Book Tower & Book Building has current and historical photo galleries of both buildings, map and an extensive account about the history of the structure. It says in part:

She’s one of a kind. Some might even say beautiful in its ugliness.

No skyscraper in Detroit, let alone the Midwest, looks quite like the Book Tower on Washington Boulevard. It’s a rather awkward-looking building, whether you look at its unusual maze of an external fire escape or the intricate, over-the-top details on its crown that are tough to appreciate without a pair of binoculars. It’s an undeniably unique piece of the city’s skyline and a rare breed of classical Renaissance-style architecture and skyscraper. As an added bonus, joined at its hip is one of the city’s oldest surviving office buildings.

The 36-story Book Tower opened in 1926 on the southwest corner of Grand River Avenue and Washington, coincidentally, the original lot that the Books’ grandfather had bought on the boulevard. Its first tenant was Detroit Bond & Mortgage. At 475 feet tall, the Book Tower would lay claim to the title of tallest building in town. Though it would hold the honor only briefly: The 47-story Penobscot Building would overtake it two years later. Today, the Book Tower is good for only the seventh-tallest landmark in town.

…Intricately carved Corinthian columns, florets, scrolls and crests are all over the place. Horizontal bands of Italian Renaissance ornamentation break up the towering skyscraper with nude female figures gracing its midsection like a belt. Nearly from ground to the top of the 36th floor, the building is covered in detail. Ferry quotes Kamper as saying, with a trace of a Bavarian accent, “I like it varm.” “Varm” or not, Kamper’s strategy on the Book tower didn’t work. His decision has been ridiculed and criticized by critics almost from the onset for not realizing the limitations on designing a structure so tall. He didn’t take a fire evacuation route into consideration when designing it, necessitating the addition of the unusual fire escape all the way down the tower. Kamper had the building faced in a porous limestone that sucked up pollutants in the air, making it almost impossible to keep clean.

View Tom’s photo bigger, see more in his Detroit slideshow, and view and purchase work from his website.

Denise McGeen’s article on One Woodward Avenue at HistoricDetroit.org says (in part):

At the heart of Detroit’s Civic Center, towering over Hart Plaza, Woodward Avenue and the Detroit River stands One Woodward, one of Detroit’s most celebrated mid-century modern structures.

The building was commissioned in 1958 by the Michigan Consolidated Gas Company Building. Detroit architect Minoru Yamasaki designed the skyscraper in association with the firm Smith, Hinchman & Grylls. The building would open in 1963 and marked a first for Yamasaki, who had never designed a skyscraper before. The building incorporates a pre-cast concrete exterior, narrow windows, Gothic arches, decorative tracery and sculptural gardens that later became the architect’s signature motifs. It has been called the fore-runner to Yamasaki’s renowned World Trade Center in New York.

…The tower’s all-welded, steel frame is clad with two-story, pre-cast concrete panels that hold 4,800 vertical hexagon-shaped floor-to-ceiling windows. The panels hang above the exterior terrace as if dripping from the building’s frame. Hexagonal grillwork wraps the building’s top two stories. The roofline features delicate crenellation — an architectural feature similar to a castle’s battlements.

Read on for much more including the challenges this project posed for Yamasaki as his first project.

View sbmeaper1’s photo big as a skyscraper and see more in their slideshow.

More architecture on Michigan in Pictures.

The Mott Foundation Building in Flint, photo by Steve Brown

My post on Tuesday generated a little controversy because I stated who I was supporting in Michigan’s primary and also that I’d continue to share my personal opinions here on Michigan in Pictures. Most readers who commented agreed, including Jim Schaefer who shared the most powerful comment I’ve ever read on my work:

Dear Farlane…I’m so glad you posted item #4 today along with the great photo. I had to move to Sheboygan, WI in 2014 for health reasons, leaving behind 45-yrs of life in Flint, MI. I’ve been saving your photos and their accompanying stories on a daily basis for several years now in their own special folder on my laptop. They are my daily reminder about all of the good things about Michigan that some Michigan residents seem to take for granted.

Unfortunately, some of these same people have conveniently forgotten about your 1st Amendment rights to editorialize on your own website. Shame on them! I am also a 72-yr old Army veteran who served a 13-month tour in a combat zone in Korea in 1966. That’s why I’m so glad that you reminded people to vote today. I was drafted against my will back in 1966 but I served my country and did my job over there and I’ll be damned if I’m going to let anyone take away my right to vote. So you keep right on posting all of those great photos along with the Michigan history behind them.

May God bless you always…Jim Schaefer

God bless you too Jim, and here’s something for your desktop folder from Flint! The Charles Stewart Mott Foundation shares this about their founder:

Charles Stewart Mott established the C.S. Mott Foundation in 1926, in response to his deep concern about the welfare of Flint, Mich., as well as his abiding affection for his adopted community.

An automotive pioneer, Mr. Mott was an original partner in the creation of the General Motors Corporation, founded in Flint in 1908. As one of the city’s leading industrialists, Mr. Mott was elected mayor, serving three terms (1912–13, 1918) during periods of overwhelming and turbulent growth in the city. As mayor he was responsible for instituting fair property assessments, orderly accounting audits, health and safety ordinances, building codes and a house numbering system.

Read more about Mott in Autos not Apples. Here’s a few facts about the 16-story Art Deco building that bears his name and houses the Mott Foundation:

View Steve’s photo big as a building and see more in his Flint, Michigan slideshow.

Hey Motor City cats & kittens – I’m visiting Detroit this Friday & Saturday. If you have thoughts about what I should be doing, please email me or hit me up through Facebook.

PS: Ryan was one of many Detroit photographers whose photos were featured in this classic Absolute Michigan video featuring the Detroit Cobras Holler:

PPS: More about the Fisher Building and the Penobscot Building on Michigan in Pictures.

This page on the Irish Hills Towers notes that the top of the towers is 1400 feet above sea level, which makes them the highest point in southeastern Michigan. On a clear day (if they were open) you could see for seven miles with a ten lakes visible.  Michigan in Pictures has more shots of these iconic landmarks including the history of the towers and a crazy cool photo by Matt Callow.

Darren took the photo and suggests that he’d like to see the towers restored and converted to a museum for Michigan’s Roadside Attractions. Check it out on black and see more in his Irish Hills Towers slideshow.