Surf’s Up Again by Julie

While the last weekend’s record winds were (and remain) a major headache for many Michiganders, there’s at least one group that’s all in favor of the current run of wild weather: surfers. Julie took this photo on Sunday & shares:

Yesterday woke up again to gale force winds. We clock 59 MPH here in town and the waves were churning again. I rode out north and there were 11 surfers. Never seen so many here. Temps rose to 59* and have never seen the likes. But the guys and girls out surfing were having a blast. I was talking to some and some drove over 50 miles to get here because of the way the waves were coming in. We still have so many that don’t have electric out and today it’s 26*. Lots of facilities open for them to come too.

I guess this is yet another reminder that every cloud may very well be someone’s silver lining. Head over to Julie’s Flickr for the latest & have a great week.

Head over to Great Lakes Surfing on Michigan in Pictures for lots more! 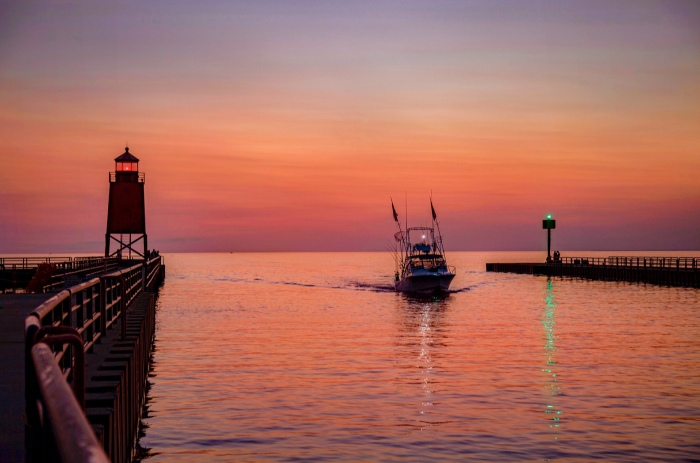 Heading Home for the Night by TP Mann

TP took this shot a couple of years ago & shares:

This is an example of being at the right place and at the right time. The sun had set long ago and the boat heading in for the night. The light reflections added to the pure beauty of this beautiful evening. This from the pier in Charlevoix Michigan, located along beautiful Lake Michigan.

Here’s hoping you find yourself in the right place at the right time this weekend! See more in TP’s Charlevoix, Michigan gallery on Flickr. 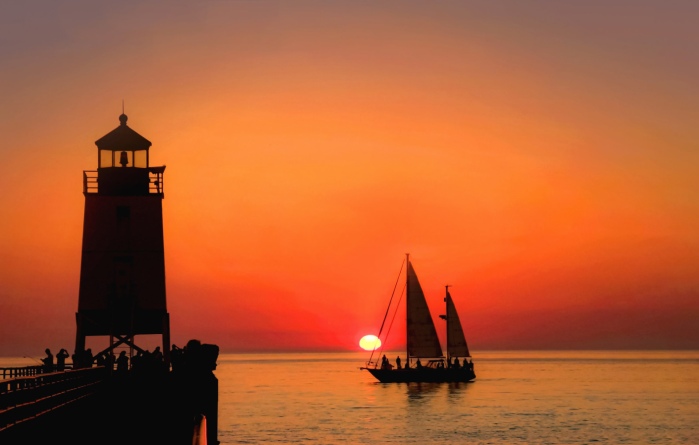 This shot was taken at one of my favorite places for photos, the lighthouse in Charlevoix Michigan along Lake Michigan. This is a case of perfect time and place.

Indeed!! Hope you get some of those “perfect time & place” moments this weekend & this summer.

Starting in 1919, and continuing into the seventies, Young fashioned over two dozen creations using indigenous materials.

Over the course of his fifty-year career, Young would build twenty-six residential houses and four commercial properties. His works are made mostly of stone, using limestone, fieldstone, and boulders that he found throughout Northern Michigan. Each of these houses is individually different and was designed to blend in with its surrounding landscape. Earl Young’s houses feature his signature designs, along with wide, wavy eaves, exposed rafter tails; cedar-shake roofs; and a horizontal emphasis in design. These buildings are creatively known as Gnome Homes, Mushroom Houses, or Hobbit Houses.

Many of the homes are accessible within a reasonable walking distance from downtown; more can be seen by car. Downtown, Stafford’s Weathervane Restaurant and Weathervane Terrace Inn & Suites on Pine River Lane, and the Lodge hotel on Michigan Avenue are also his creations.

Head over to Visit Charlevoix for a self-guided tour map!

See more from Lee on his Flickr & also at his photography blog!

This is one of the best shots I’ve seen showing how the structure of pancake ice is basically “round iceberg”. The Weather Channel explains the science behind pancake ice:

The circular slabs you see can range anywhere from one to 10 feet in diameter and up to four inches thick, typically forming in areas with at least some wave action and air temperatures just below freezing.

Pancake ice can begin as a thin ice layer (known as grease ice) or slush on the water surface, which accumulates into quasi-circular disks. The “lily pad,” or raised-edge appearance of pancake ice, can form when each disk bumps up against one another, or when slush splashes onto and then freezes on the slab’s edge.

Surfs Up by Julie

While it seems crazy, winter, particularly November & December, are Michigan’s best surfing season. If you take a look through our photos of Michigan surfing, you’ll see that the biggest waves are the ones that come with snow & cold.

Julie took this on Sunday in Charlevoix when the temperature was a balmy 37 degrees. Head over to her Flickr for a shot of all five surfers who were out and see lots more in her Lighthouses gallery on Flickr.

Visit Charlevoix says that the Charlevoix area was part of what was called Michilimackinac formed in the Treaty of Washington in 1836:

French explorer Pierre François Xavier de Charlevoix is said to have stayed on nearby Fisherman Island and the area was named after him in 1836.

…Exclusive hotels, the Inn and the Beach, were the summer destination for people from around the Midwest. Two depots served summer guests, one at Belvedere and the Pere Marquette Railway depot. Guests also arrived in the late 1800s on steamships including the Manitou, Alabama, North American, South American, Milwaukee Clipper, and Illinois.

During the Prohibition, Chicago area gang members moved their operations to Charlevoix. The Colonial Club became a gambling joint for some of the Midwest’s most powerful. A barge-turned-speakeasy traveled from Charlevoix to Boyne City carrying passengers in style during the summer months.

Lots more at Visit Charlevoix. Laurent took this sweet aerial photo of Charlevoix back in June. See many more views from above in his Aerial Photos of Northern MI gallery! 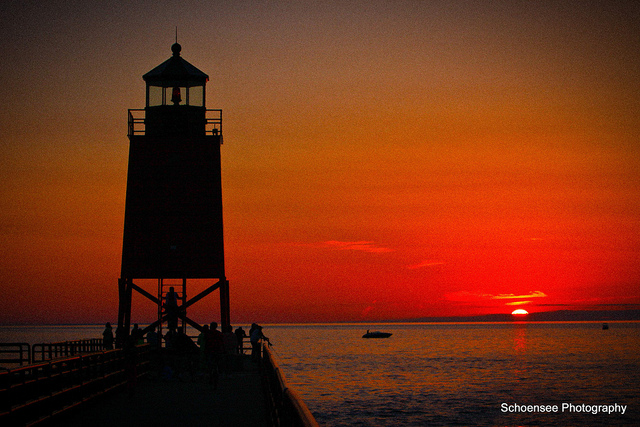 Ever since the Earth has had liquid oceans and a moon, its rotation has been gradually slowing over time due to tidal friction. That means — over very, very long periods of time — the days have been getting steadily longer. About 4.5 billion years ago, it took the Earth just six hours to complete one rotation. About 350 million years ago, it took 23 hours. Today, of course, it takes about 24 hours. And the days will gradually get longer still.

Given that, you’d think 2017 would be the longest day in all of history. But while it’s certainly up there, it doesn’t quite take top honors.

That’s because tidal friction isn’t the only thing affecting Earth’s rotation — there are a few countervailing factors. The melting of glacial ice, which has been occurring since the end of the last ice age 12,000 years ago (and is now ramping up because of global warming), is actually speeding up Earth’s rotation very slightly, shortening the days by a few fractions of a millisecond. Likewise, geologic activity in the planet’s core, earthquakes, ocean currents, and seasonal wind changes can also speed up or slow down Earth’s rotation.

Eventually, the effects of tidal friction should overcome all those other factors, and Earth’s days will get longer and longer as its rotation keeps slowing (forcing timekeepers to add leap seconds to the calendar periodically). Which means that in the future, there will be plenty of summer solstices that set new records as the “longest day in Earth’s history.”

Frank took this shot on Wednesday from the Avalanche Mountain Scenic Overlook in Boyne City. As you can see, this will be the weekend for fall color across much of Michigan, so check out some great fall scenes on Michigan in Pictures and make your plans for a getaway! 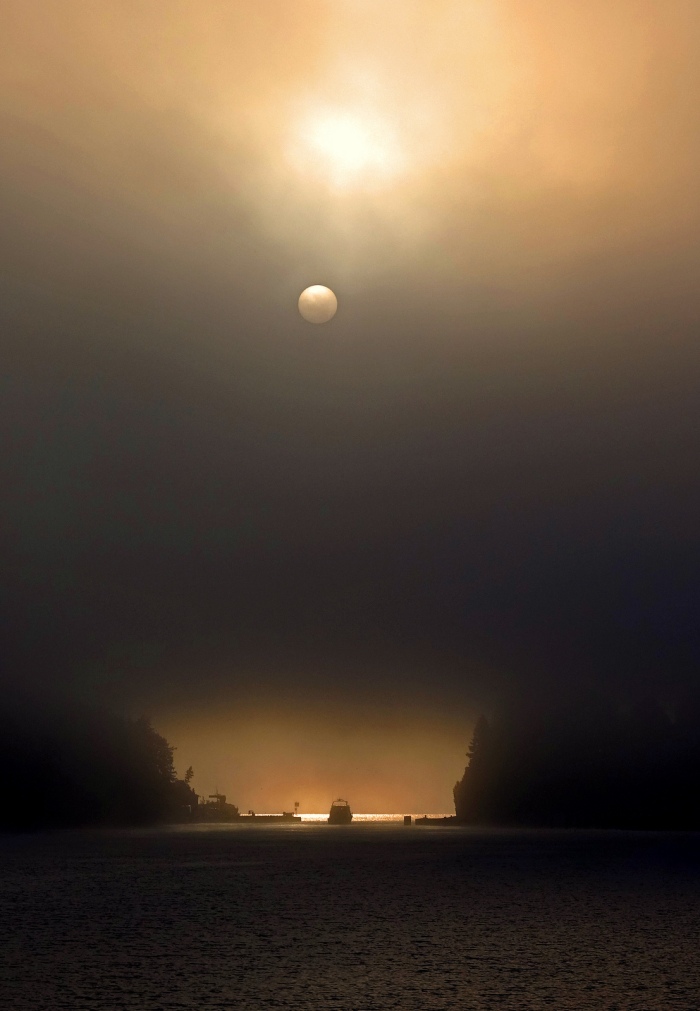 Julie says that yesterday they had thick fog in Charlevoix and she spotted this boat heading out into Lake Charlevoix.