What’s your commute looking like today? Mightymac.org has a great account of building the Mackinac Bridge, a process that began on May 7, 1954 and was completed November 1, 1957. It begins:

Construction of the Mackinac Bridge began with the construction of the pillars. Caissons were constructed, floated into position and sunk to provide the footings for the two immense towers which would suspend the center span of the bridge. Once the caissons were in place, creeper derricks were added, which raised materials to erect the towers and continued to climb higher.

The Mackinac Bridge roadway truss sections were assembled in sections and floated into position to be raised into place.

otisourcat writes: This is a color slide, but the aged Ektachrome color is so wonky, that the image is much clearer in B&W. View the photo bigger and see more Mackinac shots right here. 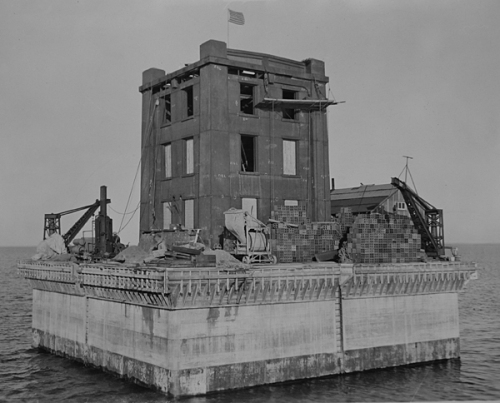 Estately has compiled a list of what each state has the most of and for once, Michigan appears to have come off well:

Michigan has the most lighthouses and the most engineers per capita. So if you’re a photographer looking for a romantic getaway weekend with an eligible engineer, then Michigan is your paradise.

It was easy to find a connection between lighthouses (of which we once had 247, still at least 125) and engineers (60,000) in the person of Orlando Metcalfe Poe, who coincidentally enough, would be celebrating his 183rd birthday today. After reviewing his service in the Civil War, Terry Pepper of Seeing the Light writes in Orlando Metcalfe Poe: The Great Engineer of the Western Great Lakes:

With the end of the Civil War, Poe assumed the position of Engineer Secretary of the Lighthouse Board in 1865, in which capacity he was charged with the supervision of building projects. In 1870, he was promoted to Chief Engineer of the Upper Great Lakes Lighthouse District.

In this capacity, Poe was responsible for all lighthouse construction, and he was largely responsible for the design of a style of lighthouse tower that has become known as the “Poe style” tower. These towers are all tall brick structures, with a gentle taper from bottom to top. All of the Poe designed feature graceful embellishments in the form of masonry gallery support corbels and arch topped windows. Exemplified by the towers at Grosse Pointe and Presque Isle, all together Poe was responsible for the construction of a number of such towers throughout Lakes Superior, Michigan and Huron.

…Many consider Poe’s crowning achievement to be the engineering, design and supervision of a new lock to at Sault St. Marie during the 1890’s. This project was instrumental in the development of commerce on the Great Lakes, permitting large ore carrying vessels from mining regions bordering Lake Superior to access the lower Great Lakes and Atlantic seaboard. At a length of eight hundred feet, and with a width of 100 feet wide, the new lock was the largest in the world, and in honor of the designer was named “Poe Lock,” a name that it carries to this day.

Connect the dots to the Poe Reef Lighthouse, about which Lighthouse Friends explains:

From the southeast point of Bois Blanc Island, a spit covered with fifteen feet of water extends a mile into Lake Huron, and five-eighths of a mile beyond this spit lies dangerous Poe Reef, a detached shoal, with a least depth of just twelve feet. In 1892, the Craig Shipbuilding Company of Toledo, Ohio was contracted to build four lightships for use on the Great Lakes. LV 62, a wooden-hulled vessel with a length of just over eighty-seven feet, was placed on Poe Reef on September 29, 1893, while her three sister ships LV 59, LV 60, and LV 61 were stationed, respectively, on Bar Point, Eleven Foot Shoal, and Corsica Shoal. With a red hull and POE REEF stenciled on its sides in white letters, LV 62 displayed a fixed white light from her foremast to mark the north side of the eastern entrance to South Channel.

LV 62 served Poe Reef, which is named after Orlando M. Poe, who served as the chief engineer of the eleventh lighthouse district, through the 1910 season, and then swapped stations with LV 59. In 1915, Poe Reef received a steel-hulled lightship, when LV 96 replaced LV 59. LV 96 marked the reef through the 1920 shipping season, and the following spring LV 99 started its service at Poe Reef.

The Lake Carriers’ Association had requested a permanent lighthouse and fog signal for Poe Reef as early as 1913, but it wasn’t until 1926 that the Commissioner of Lighthouses requested funds for such a project. Besides being less costly to maintain, lighthouses had an additional advantage over lightships: they could remain on station throughout the year rather than having to be withdrawn when ice started to form on the lakes.

Read on for more information and photos of the Poe Reef lightship, the construction of the lighthouse and modern photos. Also tune in the Michpics Facebook for a recent photo of Poe Reef.

More history and lots more lighthouses on Michigan in Pictures – enjoy your weekend everyone!