mLive shared an update on Michigan’s fall color progression that says in part:

The frost and freezing temperatures for two or three days in a row last week have sparked the fall colors. A leaf’s nutrition supply is cut off from the main tree with a freeze. The underlying color pigments in the leaf then emerge for our fall splendor.

You can also check out Pure Michigan’s Interactive Fall Foliage Map & definitely check out past fall color on Michigan in Pictures from more cool photos including the science behind fall color!

Wu took this photo back in 2015 on US-41 US-41 near Copper Harbor on the UP’s Keweenaw Peninsula. See more on their Flickr!

Terry Pepper’s Seeing the Light has an extensive article on Copper Harbor Lighthouse that shines a light on some solid planning from back in the day … and some that was less so:

As was the case with virtually all of the lighthouses built on the Great Lakes during the Pleasonton administration, the true costs of inferior materials and shoddy workmanship began to show. After his 1864 visit to the station, the Eleventh District Inspector remarked that the Copper Harbor lighthouse required “extensive repairs.” On subsequent investigation, the condition of the tower was determined to be beyond repair, and the following year the decision was made to raze the old tower and erect a completely new structure. With old Pleasonton-era stations needing replacement at both Marquette and Ontonagon, and new stations planned for Gull Rock, Huron and Granite Islands, the decision was made to build all six lights to the same plan. Specifying a simple brick two-story dwelling with a tower integrated into the center of one of the gable end walls, this design would eventually become known as the “schoolhouse” style, as a result of its similarity to the design of rural nineteenth century one room schoolhouses.

The lighthouse tender HAZE returned to Copper Harbor in early 1866 and deposited a working crew and materials on lighthouse point to begin construction of the new main lighthouse. Work began with the demolishing of the old rubble stone tower, and excavating the foundation for the new structure. Under normal circumstances one would assume that the old tower would have been left standing until the new station was complete. However, an archeological survey conducted by the Michigan Technological University in 1994 showed that a large portion of the stone from the old tower was reused in building the foundation of the new building. Thus it is evident that the old tower must have been demolished first. What steps were put in place to allow the continued display of a light at the station for the time period between the demolishing of the old tower and the completion of the new structure are unrecorded. However, it is almost certain that some arrangement for the display of a temporary light would have been made.

Atop the rubble stone foundation, a team of masons erected a Cream City brick building, and its 42-foot tall tower capped with a square gallery with iron safety railing. A spiral cast iron stairway within the tower provided the only means of passing between the first and second floors in addition to providing access to the lantern. Centered atop the gallery, a decagonal prefabricated cast iron lantern was installed, and the Fourth Order lens from the old tower reassembled atop a cast iron pedestal at the center of the new lantern.

Seeing the Light has much more including old photos and an account of the Pleasanton Administration’s first draft of the Copper Harbor lighthouse. Before you judge Stephen Pleasanton too harshly, however, click over to his Wikipedia entry where you will learn how this James Monroe appointee helped to save the Declaration of Independence during the War of 1812!

John says this is one of his favorite shots from last year. Click to view it bigger, follow him on Facebook and visit MichiganNutPhotography.com to view and purchase this and other pics. 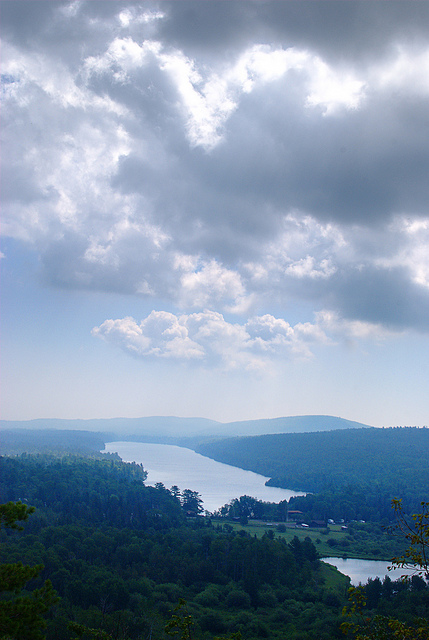 Lake Fanny Hooe is located in Fort Wilkins State Park on the Keweenaw Peninsula near Copper Harbor. A great article from Marquette Monthly about the hard life of UP women back in the day tells about how the legend of the lake turns out to be a lot more dramatic than the reality:

Local tales related that the beautiful young woman had drowned in the lake, or got lost in the woods while picking blueberries and was never seen again. In truth, Lucy Frances Fitzhigh Hooe, Fannie, spent the summer of 1844 visiting her brother Thornton, who was stationed at Fort Wilkins. Her sister, Richardetta was the wife of Lt. Daniel Ruggles, also stationed there. At the end of the summer, she returned to the family home in Virginia. She then married Chester Bailey White in 1849, and had three children. While she led an interesting life, her visit to Fort Wilkins was not a major part of it. She died in 1882, probably in Fredericksburg, (Virginia).

Read on for lots more!

Dave took this photo from Brockway Mountain Drive, looking towards Copper Harbor and Fanny Hooe. See it bigger and see more in his Copper Country slideshow.