The All About Birds listing for Aix sponsa (wood duck) says in part:

The Wood Duck is one of the most stunningly pretty of all waterfowl. Males are iridescent chestnut and green, with ornate patterns on nearly every feather; the elegant females have a distinctive profile and delicate white pattern around the eye. These birds live in wooded swamps, where they nest in holes in trees or in nest boxes put up around lake margins. They are one of the few duck species equipped with strong claws that can grip bark and perch on branches.

Wood Ducks thrive in bottomland forests, swamps, freshwater marshes, and beaver ponds. They are also common along streams of all sizes, from creeks to rivers, and the sheer extent of these make them an important habitat. Wood Ducks seem to fare best when open water alternates with 50–75% vegetative cover that the ducks can hide and forage in.

More including wood duck calls at All About Birds.

Third Son took this yesterday – see more in his Birds 2020 gallery & definitely do yourself a favor and have a look at his most popular pics!

Many (many) more Michigan birds on Michigan in Pictures.

This is a shout-out to everyone who’s struggling with being alone or simply for the bare necessities of life, and to those who are helping to ease their burden. I was so heartened by stories of friends serving meals, inviting lonely friends, and in general reaching out over the Thanksgiving holiday.

We’re all a family. Every one of us, every day.

Mother and her ducklings, photo by Brent Looyenga

A very happy Mother’s Day to all the hardworking Michigan mommas out there!

PS: I guess this qualifies as another entry in the ever-expanding Michigan in Pictures Duckie Project. 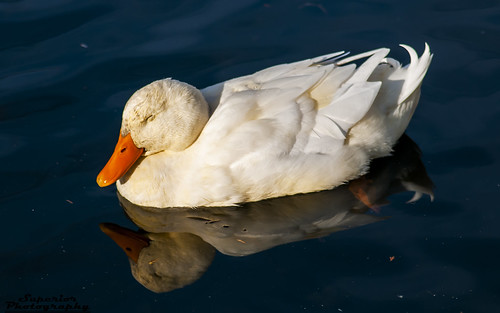 If you’re up for more duck-based fun, check out the Michigan in Pictures Duckie Project!

It’s been too long since a photo was added to the Michigan in Pictures Duckie Project.

It’s been too long since I’ve added to the Michigan in Pictures Duckie Gallery. The All about Birds entry for Mallard Anas platyrhynchos explains:

Mallards are large ducks with hefty bodies, rounded heads, and wide, flat bills. Like many “dabbling ducks” the body is long and the tail rides high out of the water, giving a blunt shape. In flight their wings are broad and set back toward the rear.

Male Mallards have a dark, iridescent-green head and bright yellow bill. The gray body is sandwiched between a brown breast and black rear. Females and juveniles are mottled brown with orange-and-brown bills. Both sexes have a white-bordered, blue “speculum” patch in the wing.

Mallards are “dabbling ducks”—they feed in the water by tipping forward and grazing on underwater plants. They almost never dive. They can be very tame ducks especially in city ponds, and often group together with other Mallards and other species of dabbling ducks.

Read on for more including photos and some fun facts:

Check this photo out bigger and in R.J.E.’s slideshow.

Here’s the latest in the always popular Michigan in Pictures Duckie Series.

Seriously, untouched—-exactly how it grew and the markings are natural…just a little saturation of color and edging but this is really Gods duck.

See it bigger and in Marsha’s slideshow.

Check this out bigger in Richard’s Summertime slideshow and remember that Michigan in Pictures is your source for Michigan duckie photos – accept no substitutes!

This photo is part of Paul’s Artful set (slideshow). It’s also part of my developing collection of Michigan duck-related phoptography, but the less said about that, the better!

I was shooting some duck pictures today when all the sudden something startled all the ducks. Calm to chaos in less than a second. I managed to snap off 4-5 pics before I got a little panicked and got out of the way.

We’ve all heard of the many Inuit names for snow. In case anyone was wondering, ducks are pretty much the same. There’s quite a collection of names for a group of ducks including a paddling of ducks or a raft of ducks (when floating along), a plump or team of ducks (in flight overhead), a brace of ducks (post hunting I believe) or a dopping of ducks (when diving). More ducks on Michigan in Pictures.

None of these seemed quite right but fortunately there’s also a flush of ducks, which I’m going to assume covers exactly this scenario.