The Challenge by Charles Bonham

Charles took this shot of a heron trying to show a group of egrets who’s boss near Midland last weekend. Dive into his Flickr for more & be sure to check out his showcase!

Three of Many, photo by smfmi

View the photo from the Poseyville wetland in Midland County bigger and see more in smfmi’s Birds slideshow.

I’m pretty sure that the bird John has captured so perfectly is a Great Egret. Fittingly, the egret tag on Michigan in Pictures includes another stunning photo by John of Great Egrets in flight along with all kinds of info about this beautiful bird. 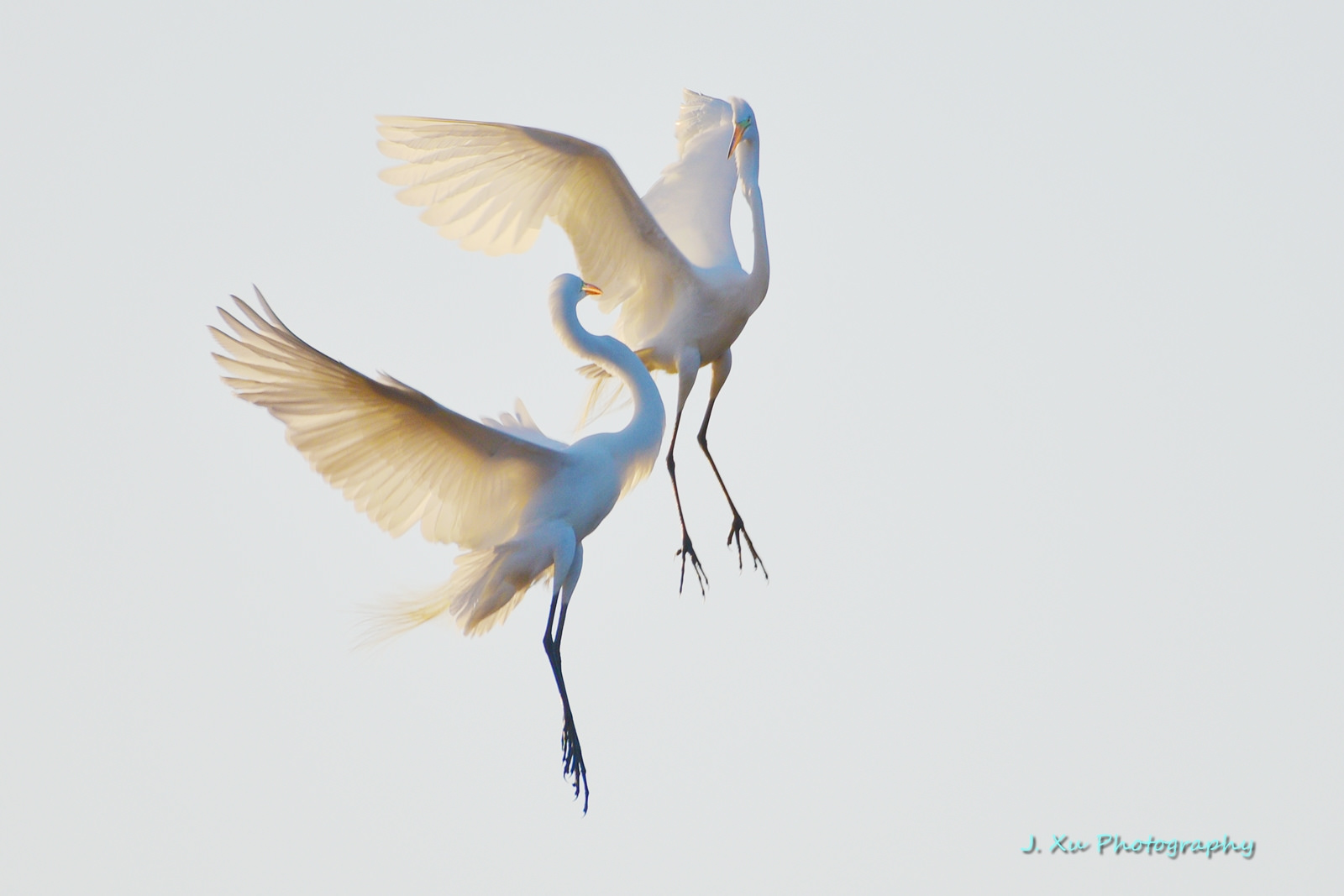 Dancing in the Air, photo by Jiafan(John) Xu

I’m pretty sure that these are Great Egrets (Ardea alba) but would appreciate confirmation from any birders in the audience.

On the Pure Michigan blog, Mallory King of the Michigan Audubon Society writes that birding is currently the second fastest growing hobby in the United States after gardening with over 47 million people identifying as birdwatchers. She shares some great Michigan birding trails and sanctuaries to help you get going with birding:

The Superior Birding Trail: This trail covers 150 miles in the Upper Peninsula from the Seney National Wildlife Refuge to Whitefish Point; you can observe over 300 bird species here.

The Sleeping Bear Birding Trail: The SBBT West which the trial is commonly referred too, includes 123 miles from Manistee to Traverse City along the scenic M-22 highway and Lake Michigan shoreline; here over 250 bird species can be observed.

The Beaver Island Birding Trail: Located entirely on Lake Michigan’s largest island, encompasses over 100 miles of road and 12,000 acres of natural habitat; over 250 bird species can be spotted on this adventurous trail.

The Saginaw Bay Birding Trail: Also known as SBBT East, takes travelers 142 miles along the Lake Huron shoreline from Port Crescent State Park to Tawas Point State Park, the trail is home to over 200 bird species and an abundance of quaint Michigan towns.

Read on for a list of the sanctuaries and more at Pure Michigan.

John took this last month, presumably in the Keweenaw area. View his photo bigger and see more in his slideshow.

Bill took this photo in the Lake Erie Metropark (aka Brownstown Park). View his photo bigger and see more in his Birds slideshow.

More about Great Egrets on Michigan in Pictures. 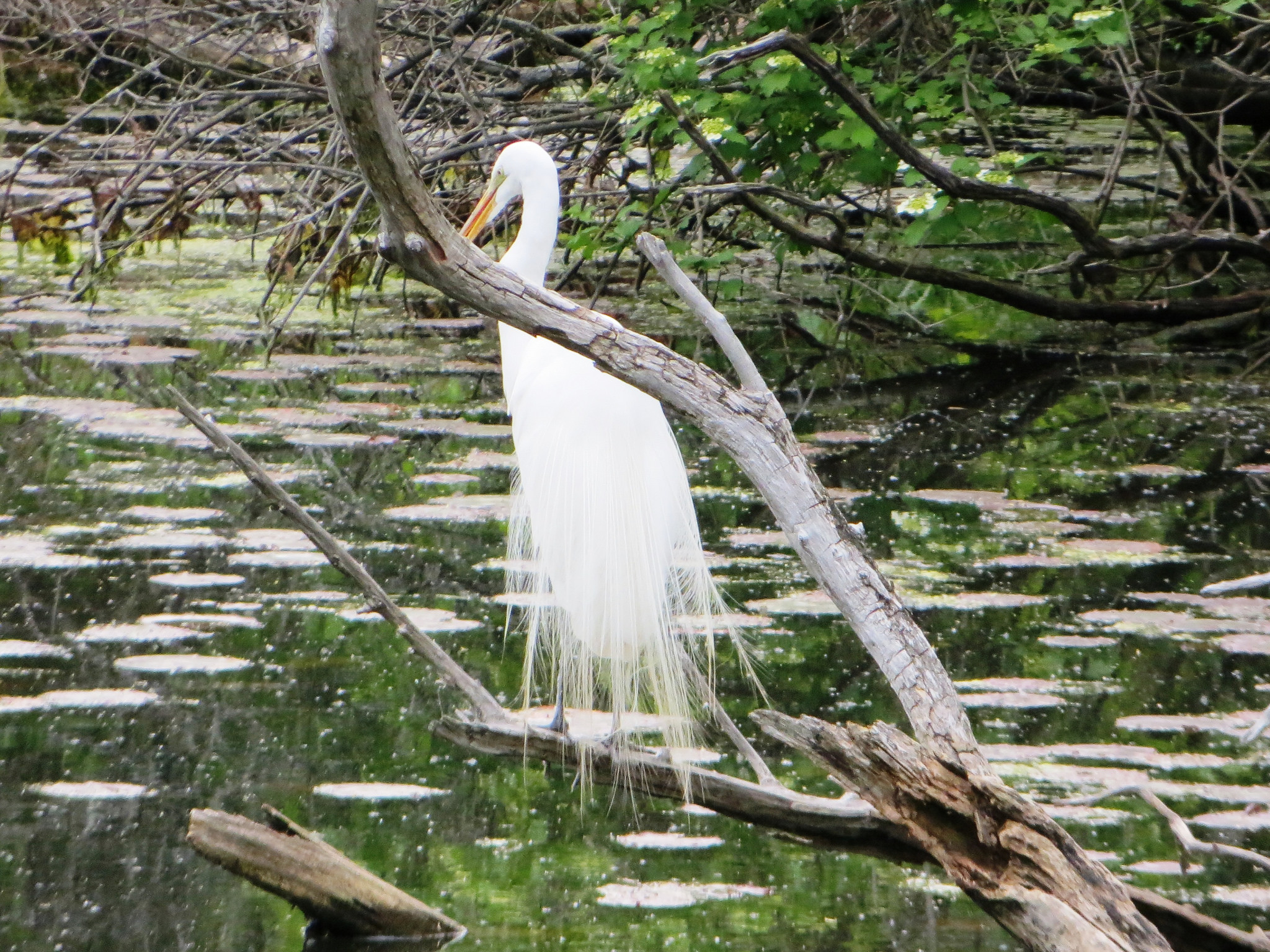 How the Great White Egret Inspired Bird Conservation in the Smithsonian says:

One particular group of birds suffered near extermination at the hands of feather hunters, and their plight helped awaken a conservation ethic that still resonates in the modern environmental movement. With striking white plumes and crowded, conspicuous nesting colonies, Great Egrets and Snowy Egrets faced an unfortunate double jeopardy: their feathers fetched a high price, and their breeding habits made them an easy mark.

To make matters worse, both sexes bore the fancy plumage, so hunters didn’t just target the males; they decimated entire rookeries. At the peak of the trade, an ounce of egret plume fetched the modern equivalent of two thousand dollars, and successful hunters could net a cool hundred grand in a single season. But every ounce of breeding plumes represented six dead adults, and each slain pair left behind three to five starving nestlings. Millions of birds died, and by the turn of the century this once common species survived only in the deep Everglades and other remote wetlands.

This slaughter inspired Audubon members to campaign for environmental protections and bird preservation, at the state, national and international levels. The Lacey Act passed Congress in 1900, restricting interstate transport of wild fowl and game. In 1911 New York State outlawed the sale of all native birds and their feathers, and other states soon followed suit. Passage of the Weeks-McLean Act (1913) and the Migratory Bird Act (1918) took the protections nationwide and mirrored legislation in Canada, Britain, and Europe, effectively ending the fancy-feather era.

More about Great Egrets on the UM Animal Diversity Web.

You can view Cowboy’s photo from last May background big and see more in his Animals & Wildlife slideshow.

More birds and more Spring wallpaper on Michigan in Pictures!

The Michigan Bird Atlas has a nice document on the Great Egret in Michigan that says (in part):

Today, the Great Egret is a powerful symbol of early conservation efforts mounted to safeguard it and other species from overhunting for their feathers in the 1800s. Protection in the early 1900s is credited with population recovery and establishment of the Great Egret as a breeding species in Michigan approximately 50 years ago.

…Great Egrets reach the northern edge of their U.S. distribution in Michigan. Historically, there is no evidence that this species nested in Michigan until the 1950s. For example, Barrows (1912) and Wood (1951) did not report Great Egrets as breeders in Michigan at the time of their studies, but Kelley et al. (1963) confirmed nesting in 1954 by nine pairs on Stoney Island (Detroit River) and seven on Dickinson Island (Lake St. Clair). These colonies appear to have persisted into the mid-1970s when W. Scharf et al. (1978) documented egrets at these sites in 1976. Although these colonies were no longer active at the time of the 1989-91 Great Lakes Colonial Waterbird Census, Sharf and Shugart (1998) reported new colonies in Saginaw Bay and at Pte. Mouillee State Game Area, Monroe Co.

The UM Animal Diversity Web has some information, calls and photos for Ardea alba, and also Great Egret (Ardea alba) on Michigan in Pictures.

Check this photo out background big and see more in Rodney’s Animals slideshow.