A Changeable Day on the Lake by Mark Smith

This week I lost a friend & mentor, Greg Reisig. Greg was my publisher back in the 90s when I wrote for his Lake Country Gazette out of Elk Rapids. He was a man with an amazingly gentle soul who could nonetheless be fierce & determined in defense of Michigan’s environment. Bill Latka of Oil & Water Don’t Mix penned a great tribute to Greg, who was a  board member of that organization & the co-chair of the Northern Michigan Environmental Action Council (NMEAC):

Since his early days as an environmental journalist and then for decades as a key protector of trees, water, and air for all of northern Michigan with NMEAC, Greg was a fearless yet gentle champion for the environment.

NMEAC has set up an endowment fund to create The Greg Reisig Prize for Environmental Journalism to celebrate his accomplishments. If you value the work that Oil & Water Don’t Mix is doing, you should know that Greg was a key part of it. I invite you to contribute to fund the award so that future generations will know how much he made a difference every day.

His support of the campaign to shut down Line 5 brought a kind focus and keen sense of optimism for the work that kept us all going. He will be dearly missed.

Mark took this photo last October at the the Wilcox-Palmer-Shah Preserve just north of Elk Rapids. More from Mark at downstreamer on Flickr.

Monument to the Dean of Michigan’s Tourism Activity on Roadside America says:

If someone asked, “Who has had a rock pyramid built in their honor?” you might think of an Egyptian pharaoh or an Aztec king. You would probably not think of a bespectacled, middle-aged, mid-western man named Hugh J. Gray. Nevertheless, Hugh has one — on a smaller scale compared to the ones in Egypt and Mexico, but a rock pyramid nevertheless.

Hugh was, according to the plaque on his pyramid, the “Dean of Michigan’s Tourist Activity.” The pyramid, erected in 1938, stands on Cairn Highway, named apparently in reference to Hugh’s pile of rocks. Cairn Highway is an obscure back road today, which says something about the transient nature of fame.

Hugh’s pyramid is built of rocks from each of Michigan’s 83 counties.

Ragnar suggests that you plug the coordinates 44.948227, -85.352708 into Google Maps to find your way there. View his photo background big and see more in his slideshow. 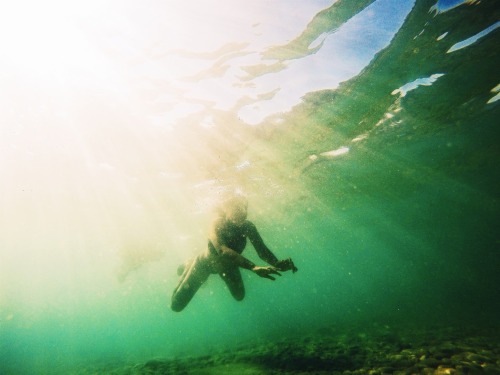 View this gorgeous shot of the Elk Rapids harbor at sunset bigger and see more in Heather’s Sunsets slideshow and if you’re interested in purchasing this (or other pics) click to Snap Happy Gal Photography’s Sunrises & Sunsets.

More sunsets on Michigan in Pictures.