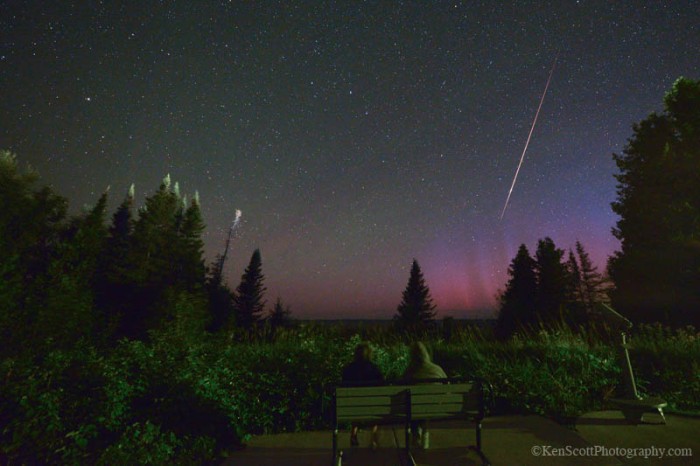 Well, my farewell tour to Autumn lasted a whole day. What can you do with things to share like this though?

Yesterday NOAA’s Space Weather tipped us off that there was a chance of strong geomagnetic storms producing northern lights. Now NOAA forecasters are saying there’s a good chance of a strong, G3-class geomagnetic storm during the next 24 hours that could bring auroras as far south as southern Michigan and even into Illinois & Ohio! Top that off with clear skies in the forecast and that means EVERYONE in Michigan should make a point to get out to someplace dark tonight for better than average chance of seeing some killer aurora action!

It gets better though! EarthSky shares information about the South Taurid meteor shower that peaks on November 4th & 5th and is underway right now.

The meteoroid streams that feed the South (and North) Taurids are very spread out and diffuse. That means the Taurids are extremely long-lasting (September 25 to November 25) but usually don’t offer more than about 7 meteors per hour. That is true even on the South Taurids’ expected peak night. The Taurids are, however, well known for having a high percentage of fireballs, or exceptionally bright meteors. Plus, the other Taurid shower – the North Taurids – always adds a few more meteors to the mix during the South Taurids’ peak night. In 2015, the slim waning crescent moon coming up before dawn will not seriously obtrude on this year’s South Taurid meteor shower. The South Taurids should produce their greatest number of meteors in the wee hours – between midnight and dawn – on November 5. Remember, it’ll be possible to catch a fireball or two!

Like the South Taurids, the North Taurids meteor shower is long-lasting (October 12 – December 2) but modest, and the peak number is forecast at about 7 meteors per hour. The North and South Taurids combine, however, to provide a nice sprinkling of meteors throughout October and November. Typically, you see the maximum numbers at around midnight, when Taurus the Bull is highest in the sky.

Read on for info about where to look for the best chance – short answer is to the east between midnight and dawn!

My friend Annette came up for a visit from Detroit and I wanted to show her some Perseid Meteors, so I got permission to work in the Grand Traverse Lighthouse Park after dark (thank you folks!) and well, we got more than we bargained for … a 4+ second fireball and unknown to us because they were hid by the trees and very dim … Aurora Borealis!!
and did I mention 2 ISS flybys!!
She paraphrased ‘we don’t see this in Detroit’ . . .
It was a good eve

View his photo bigger, see more in his massive Skies Above slideshow and enjoy this timelapse!