The Manabezho Falls are part of the Presque Isle River’s spectacular final dash to Lake Superior. The entire 1 mile stretch is very beautiful, with lots of bare rock and rapids. It is easily accessible from the Presque Isle entrance off of CR-519 on the western end of the park…

Manido Falls are just short distance upstream. Nawadaha Falls is a bit farther upstream. Downstream of Manabezho the river plunges into a narrow gorge. The “falls” there have no name, but they are quite interesting.

The falls are located in the Porcupine Mountains State Park. More Michigan waterfalls on Michigan in Pictures!

This photo is from a couple of weeks ago. Head over to malderink’s Flickr for more! 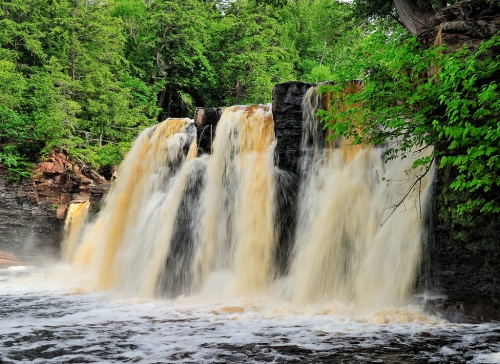 Last month Michigan in Pictures regular John McCormick aka Michigan Nut had a feature on the Pure Michigan Blog titled Eight Reasons to Get Out and Explore Michigan’s Waterfalls this Summer.

I think that I may have featured all 8 shots here on Michigan in Pictures, so here’s a pic I hadn’t seen of Manabezho Falls. View it bigger on Flickr, follow Michigan Nut on Facebook and if you need 98 more reasons, here’s John’s Michigan Waterfalls slideshow.

More waterfalls on Michigan in Pictures and speaking of Manabezho definitely check out the story of Manabozho and His Toe. 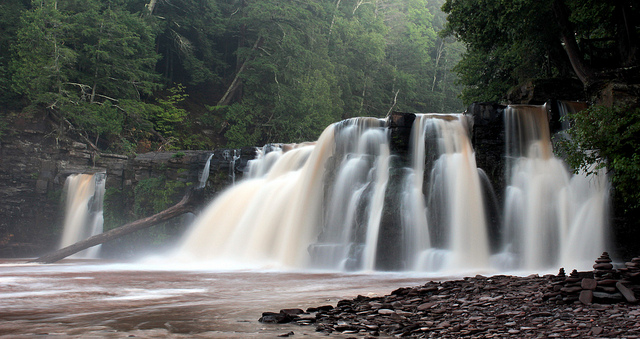 The stories of the people native to Michigan are among my favorite. One reason is for the pervasive humor that enriches them. Manabozho was definitely a trickster, one of four divine brothers in Algonquin tales. Via the Literature Network, here’s Manabozho and His Toe:

Manabozho was so powerful that he began to think there was nothing he could not do. Very wonderful were many of his feats, and he grew more conceited day by day. Now it chanced that one day he was walking about amusing himself by exercising his extraordinary powers, and at length he came to an encampment where one of the first things he noticed was a child lying in the sunshine, curled up with its toe in its mouth.

Manabozho looked at the child for some time, and wondered at its extraordinary posture.

“I have never seen a child before lie like that,” said he to himself, “but I could lie like it.”

So saying, he put himself down beside the child, and, taking his right foot in his hand, drew it towards his mouth. When he had brought it as near as he could it was yet a considerable distance away from his lips.

“I will try the left foot,” said Manabozho. He did so and found that he was no better off, neither of his feet could he get to his mouth. He curled and twisted, and bent his large limbs, and gnashed his teeth in rage to find that he could not get his toe to his mouth. All, however, was vain.

At length he rose, worn out with his exertions and passion, and walked slowly away in a very ill humour, which was not lessened by the sound of the child’s laughter, for Manabozho’s efforts had awakened it.

He did not, however, revenge himself on his victor, but on his way homeward, meeting a boy who did not treat him with proper respect, he transformed him into a cedar-tree.

“At least,” said Manabozho, “I can do something.”

If you’d like more of Manabohzo, check out Manabohzo and the Ultimate Fish Story which might make you a bit more kindly disposed to seagulls.

More about Manabezho Falls on Michigan in Pictures.