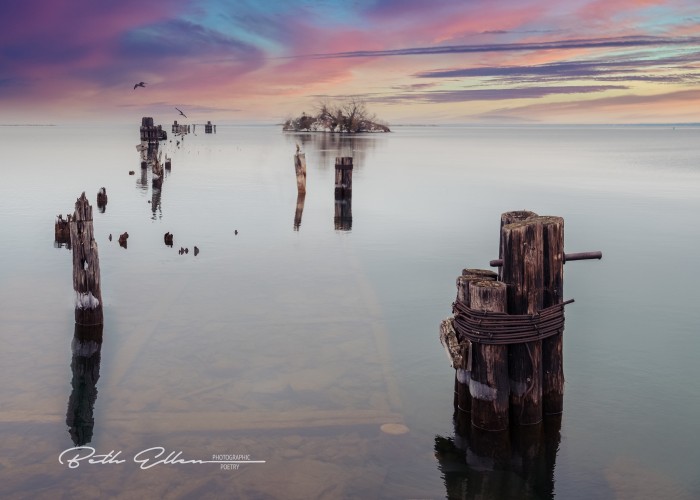 The day I understood everything by Fire Fighter’s Wife

Beth took this cool shot of the remains of an old Lake Superior dock a few years ago. See more in her Waterscapes/Nautical gallery on Flickr.

Off to the Races by Hannah Frames Moments

The annual UP 200, Midnight Run, and Jack Pine 30 Sled Dog races took place in Marquette & the surrounding area last weekend. They share that musher Ryan Anderson of Cushing, WI finished first in the 228-mile UP200 Dog Sled Race followed by Wade Marrs & Nick Vigilante. Michael Bestgen & Joanna Oberg had the top 2 finishes in the 82-mile Midnight Run, and Erin Schouweiler was the top finisher in the Jack Pine 30.

The photo was taken by Hannah Wescott. You can see a bunch more on her Facebook page & for sure head over to her website to view & purchase her work!

On his Twitter, Michigan’s Sunrise King Bugsy Sailor shared a phenomenon that I’d never heard of – Orehenge! He writes:

Twice a year, for a few days stretch, the sun rises down the center of the historic Marquette ore dock.

And oh boy, does the community loves it! Just as they should. But my introverted self, loving my mornings of solitude and meditation, has to overcome a lot of anxious energy to walk into a crowd during my most cherished time of the day.

Orehenge, as it’s affectionately called, falls in November and January, where the sun is really seen at sunrise. From my January data over three years, there is less than a 20% chance of seeing the sun at sunrise.

There’s more observations & photos of this very cool seasonal happening and the crowd that showed up @BugsySailor on Twitter. For sure check out his Twitter for more & if you’re low on Upper Peninsula swag, his UP Supply Co is a great source!

Before the Plows Come By by Ann Fisher

Ann captured a nice winter mood in this photo from a late December evening in Marquette. See more in her 2021 UP gallery on Flickr & thanks to all the hardworking plow drivers around the state!

Waterfalls of the Keweenaw entry for Reany Falls says in part:

Aaron took this photo back in August of 2017. See more in his massive Michigan waterfalls gallery on Flickr.

Waterfalls of the Keweenaw shares some info about Reany Falls:

David took this photo last weekend. See more from David in his 2022 Calendar gallery on Flickr.

Many (many) more Michigan waterfalls on Michigan in Pictures!

The rock comprising the area represents some of the oldest exposed formations of its kind. More than a mile of bedrock lakeshore and cliffs adorns Little Presque Isle, including sandstone cliffs that reach nearly 60 feet high toward the base of Sugar Loaf Mountain. One kind of bedrock, granitic, that occurs here is the least common bedrock type along the Great Lakes shoreline, with less than eight miles occurring in total. This is one of three areas where the public can see these 2.3 billion year old formations in Michigan.

The proposed wilderness area is a local landmark, which has significant historical value. The island was reportedly connected to the mainland sometime prior to the 1930s and was a landing place for early explorers and native inhabitants.

John took this photo last week. See the latest at Michigan Nut Photography on Facebook. View & purchase more of his work at MichiganNutPhotography.com.

“I don’t cry because we’ve been separated by distance, and for a matter of years. Why? Because for as long as we share the same sky and breathe the same air, we’re still together.”
― Donna Lynn Hope

Thom got this sweet photo of the James L. Oberstar leaving Marquette Harbor last night, downbound with a load of iron ore pellets. Stay strong everyone, and look to those you share a sky with who may be struggling right now.

Check his photo & more out on Flickr & dive into almost 100 more photos of this Michigan freighter in the Absolute Michigan pool!

Did you get all your summertime fun in? If not, get on that before it’s gone!

Paula took this a year ago at Blackrocks in Marquette’s Presque Isle Park. View it background bigtacular and see more in her Summer 2017 album on Flickr.