View Ryan’s stunning shot of the Detroit Skyline from Belle Isle bigger on Facebook, see more in his Nights in Detroit slideshow, and if you’d like him to apply his mad photography skills for your wedding or engagement, head over to ryansouthen.com.

Hope your Fourth of July is as big, bold & amazing as this great shot of the Detroit fireworks over the Renaissance Center from Lafayette Park.

More Renaissance Center photos and info on Michigan in Pictures. 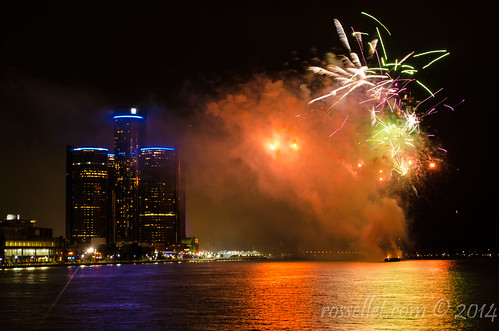 Bombs of Smoke And Confetti, photo by Ross Ellet

Happy 4th of July everyone!

The 619 ft tall, 43-story One Detroit Center is the tallest office building in Michigan and second tallest building in the city behind the central hotel tower of the Renaissance Center. Completed in 1993, it started out as the Comerica Tower. The Detroit 1701 page on Comerica Tower says (in part):

This skyscraper is distinguished from all other tall buildings in Detroit by its neo-gothic spires. As Eric Hill and John Gallagher describe them in their book AIA Detroit, these are Flemish inspired spires.

…Philip Cortelyou Johnson was among the nation’s most influential architects and architectural critics of the Twentieth Century in the post-World War II era. Born in Cleveland in 1906, he studied philosophy at Harvard. However, he had the opportunity to take several trips to Europe while an undergraduate and became fascinated with the architecture there. In 1928, he met the innovative Ludwig Mies Van der Rohe whose work is commemorated in an historic district that bears his name located less than a mile from Comerica Tower.

In the early 1930s, Johnson affiliated himself with the Museum of Modern Art in New York and sought to support himself by promoting modern architecture and commenting about it. Apparently, that was not a financially rewarding career so he became a journalist, went to Germany and covered the rise to power of the National Socialists. Apparently, that was not completely rewarding either, so he returned to the United States and enlisted in the Army. After serving for some time, he appreciated his real calling and enrolled at the Harvard Graduate School of Design to become an architect. By the late 1940s, he began his very distinguished career.

Along with collaborators, especially Mies Van der Rhoe in the early years and John Burgee in the later years, he designed a large number of modern skyscrapers. He broke away from the classical tradition that is illustrated in Albert Kahn’s nearby First National Bank Building completed in 1922. His structures also differ from the stark modernist style illustrated by Minoru Yamasaki’s Michigan Consolidated Gas building, completed in 1965, that is almost directly across Woodward from Comerica Tower. Note the rounded corners that Philip Johnson designed for Comerica Tower conveying a sense of gentleness. All other downtown skyscrapers have right angles for their corners.

Read on for more and get One Detroit details from Emporis.

View Michael’s photo big as a building and see more in his awesome Detroit Tour slideshow.

More architecture on Michigan in Pictures.