In honor of National Doughnut Day, mLive’s John Gonzalez & Amy Sherman have released their Essential Guide to Michigan’s Best Doughnut. They have their baker’s dozen of 13 winners at that link & you can also follow them at MiBest on Facebook. or @MichiganGonzo on Twitter.

Scott took this shot of the Dawn Donut sign in Flint back in 2011 & shares that Dawn Donuts was a Michigan-based chain that at one time had nearly 50 locations across the state. Most closed after Dunkin’ Donuts purchased the business in the early 1990s. You can see a bunch more great signs in his Vintage Signs album on Flickr.

There’s still a Dawn Donuts & the cool sign at this location – the last in Michigan. Check them out at Dawn Donuts on Facebook!

PS: Head over to Roadside on Michigan in Pictures for more vintage coolness!

Remember folks: I don’t take the photos, choose the titles … or name businesses Wienerlicious. That said, have a Wienerlicious Friday!

Monument to the Dean of Michigan’s Tourism Activity on Roadside America says:

If someone asked, “Who has had a rock pyramid built in their honor?” you might think of an Egyptian pharaoh or an Aztec king. You would probably not think of a bespectacled, middle-aged, mid-western man named Hugh J. Gray. Nevertheless, Hugh has one — on a smaller scale compared to the ones in Egypt and Mexico, but a rock pyramid nevertheless.

Hugh was, according to the plaque on his pyramid, the “Dean of Michigan’s Tourist Activity.” The pyramid, erected in 1938, stands on Cairn Highway, named apparently in reference to Hugh’s pile of rocks. Cairn Highway is an obscure back road today, which says something about the transient nature of fame.

Hugh’s pyramid is built of rocks from each of Michigan’s 83 counties.

Ragnar suggests that you plug the coordinates 44.948227, -85.352708 into Google Maps to find your way there. View his photo background big and see more in his slideshow. 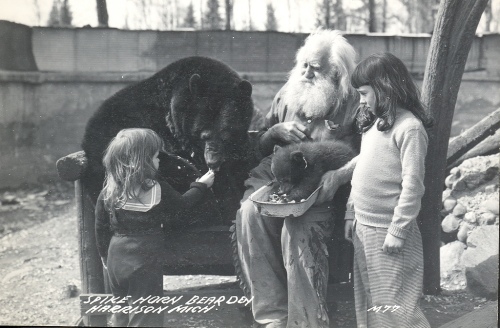 Here’s a Throwback Thursday featuring one of Northern Michigan’s most colorful characters:

Harrison’s most colorful character was John “Spikehorn” Meyers, known to thousands of Michigan residents simply as Spikehorn. He was a showman, naturalist, politician, coal miner, tile manufacturer, furniture builder, inventor, realtor, bear hunter, lumberjack, and above all, individualist. The old gentleman had a fertile imagination under his white thatch of hair and full white beard.

According to neighbors, Spikehorn’s interest in the woods and buckskins developed around 1930, when he opened his Bear and Deer Park established on his property at the corner of US-27 and M-61. Rumor has it the park even contained an occasional buffalo.

Spikehorn and his friend, Red Eagle, dressed in buckskins for tourists and treated them to tales of their adventures in the woods. He enjoyed feeding his pets sweets, popcorn, and pop and loved posing with his deer and bears for cameras.

Spikehorn also appears in one of the best Michigan history videos, Roaming Through Michigan, a classic newsreel.

This page on the Irish Hills Towers notes that the top of the towers is 1400 feet above sea level, which makes them the highest point in southeastern Michigan. On a clear day (if they were open) you could see for seven miles with a ten lakes visible.  Michigan in Pictures has more shots of these iconic landmarks including the history of the towers and a crazy cool photo by Matt Callow.

Darren took the photo and suggests that he’d like to see the towers restored and converted to a museum for Michigan’s Roadside Attractions. Check it out on black and see more in his Irish Hills Towers slideshow.