The undefeated & #6 ranked University of Michigan Wolverines travel to Spartan Stadium in East Lansing on Saturday to face the also 7-0 Michigan State University Spartans. First & foremost, let us know in the comments who you got this weekend!

mLive notes that the last time these two programs were top 10 with such a high profile meeting, the Beatles were touring America:

Saturday’s game between the Wolverines and the Spartans will be the first time in the 113-year history between these two state rivals that both teams are at least 7-0. It’s also the first game both teams have been ranked in the Top 10 since the same year The Beatles landed in the U.S.

The setting was East Lansing on October 10, 1964. Seventh-ranked Michigan took on 9th-ranked MSU in one of the biggest games in the decades-long rivalry, with Michigan winning 17-10 in front of 78,234 people. This was just the fourth game against each other where both teams were ranked in the Top 10.

…Michigan is favored by four over the No. 8 ranked Spartans. The Wolverines lead the all-time series 71-37-5.

Cory took this photo of the Spartans getting ready to punch it in back in October of 2009. MSU eventually won the game in overtime. See more in Cory’s HDR Photography gallery on Flickr & view and purchase prints on his website! 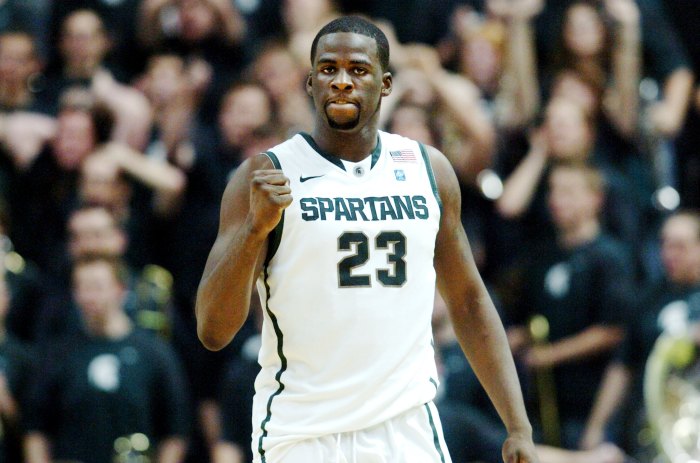 MSU vs Wisconsin by Matt Hallowell

The State News has a feature on their new EverGreen image & likeness program to inform student-athletes about building a personal brand, making informed decisions and positioning themselves to maximize their earning power:

“Our goal is to provide our student-athletes the tools for success — on the field of competition, inside the classroom and beyond MSU,” Michigan State Vice President and Director of Athletics Bill Beekman said in the press release. “Name, image and likeness legislation will offer new opportunities for our student-athletes and EverGreen will prepare and position them for these changes.”

…This is the first action by Michigan State to help its athletes profit while competing in college. The road opened up after the state of Michigan passed legislation in Dec. 2020 allowing athletes to profit off their name, image and likeness and the Supreme Court ruling this week that struck down parts of NCAA’s amateurism restrictions for student-athletes.

Matt shared this photo of MSU standout & NBA champion Draymond Green back in 2011. See more in his Sports Portfolio gallery on Flickr.

USA Today notes that Michigan and Michigan State have combined to make hoops history this year:

For the first time in the 75-year history of the NCAA tournament Michigan and Michigan State have advanced to the Sweet 16.

The Big Ten’s Wolverines and Spartans earned their tickets right in their backyard, in dominating fashion, in a supercharged atmosphere Saturday at the Palace.

Michigan State, 81 miles from East Lansing, made it a historic day, slamming the front door on Memphis 70-48.

They were also the first two teams into the Sweet Sixteen. Michigan will face #1 seed Kansas on Friday while MSU squares off against #2 Duke.

Robbie took this shot at a March 3rd meeting between Michigan and Michigan State in which the Wolverines eked out a 57-56 win thanks to a game-saving steal & slam by Trey Burke. (click that link for Robbie’s photo) Check this out background bigtacular or view a great gallery from the game at  robbiesmallphotography.com!

More basketball on Michigan in Pictures.