Mark got this photo of the SS Badger leaving Ludington last fall. See his latest on his Flickr & enjoy your weekend!

NPR has a feature on the upgrades to the SS Badger that allow the car ferry to continue to operate between Michigan and Wisconsin on Lake Michigan:

For years, the ship was the focus of environmental scrutiny because of its practice of dumping waste coal ash directly into the lake. The pollution nearly stopped the Badger from steaming again — but now, the ash-dumping has ended.

…After decades of letting the Badger pollute the lake, the Environmental Protection Agency issued an ultimatum: Stop dumping or be grounded.

Finally, this off-season, the boat’s owner installed a $2 million solution: a set of blue pipes that collect ash each trip, about 500 tons per year. Once a week, that ash gets trucked to Charlevoix, Mich., for use in making cement products.

You can get all the info on the Badger right here. For an added dose of awesome in your day, check out The Steamer 43 Song by Pete Host, featuring photos of the SS Badger on Absolute Michigan. It’s from a 45 Pete recorded in the early 70s about a sailors life on the C&O carferries out of Ludington, Michigan. With his spare time aboard the Badger, he learned how to play the guitar, and in just a few months, went to Milwaukee Wis. and recorded this song.

View the photo bigger and see a couple more of R.J.E.’s photos of Ludington, Michigan.

More Michigan ships and boats on Michigan in Pictures.

David got a great shot of the SS Badger car ferry arriving in Ludington on its last crossing of Lake Michigan for the 2014 season. 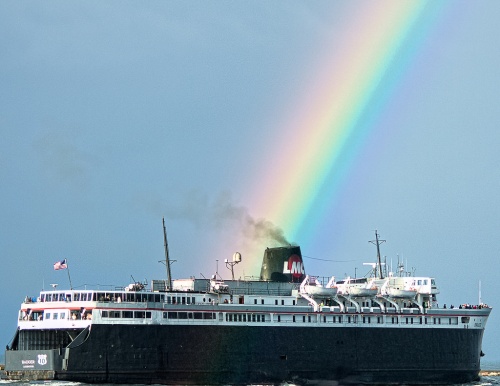 Rainbow over the Badger, photo by mark zacks

View Mark’s photo big as a boat and click for more of his Ludington shots including a few more of the Badger car ferry.

More ships & boats and more rainbows on Michigan in Pictures.