Tahquamenon Falls in Michigan’s UP by Tom Clark

Tom swung by Tahquamenon Falls over the weekend and shares:

Amazing! I have never seen it with such a large volume and flow as today. It’s supplied by the spring melt-off and rain. Another benefit of the run-off is the intensity of color – again, never seen such deep rich color. That is why it’s aptly referred to as “root beer falls”.

Indeed!! See more in Tom’s UP Trip with Dave – April 2022 gallery on Flickr & view & purchase his work on his website.

Much more from Tahquamenon Falls on Michigan in Pictures! 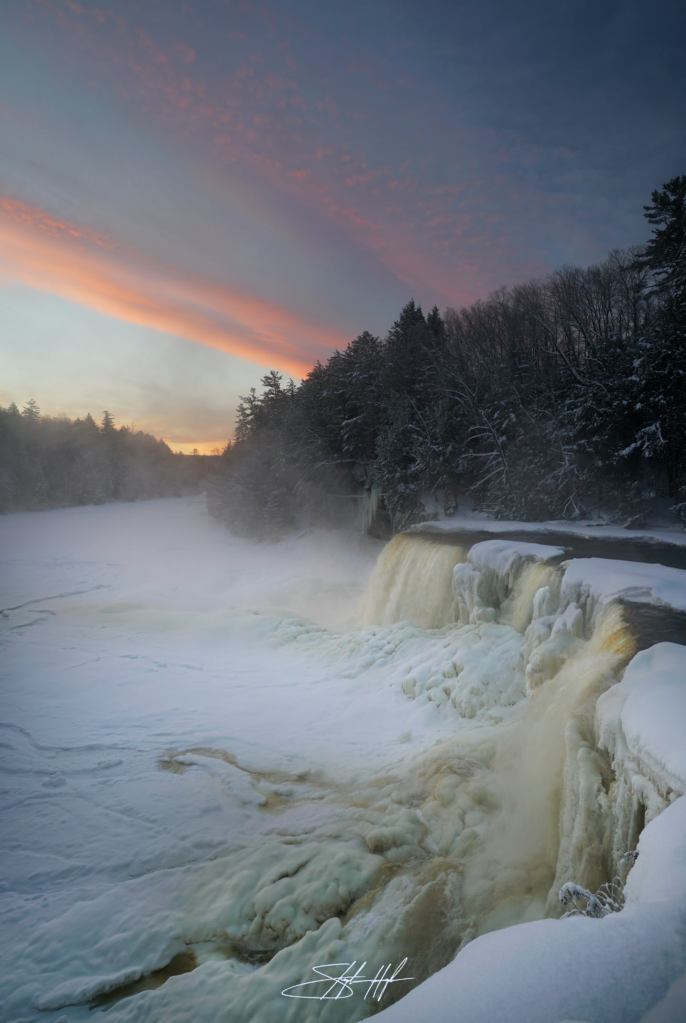 S Hughes shared this sweet shot from a subzero sunrise the other day at the Upper Falls in Tahquamenon Falls State Park.  Follow her on Facebook & for sure check out her video from the overlook! 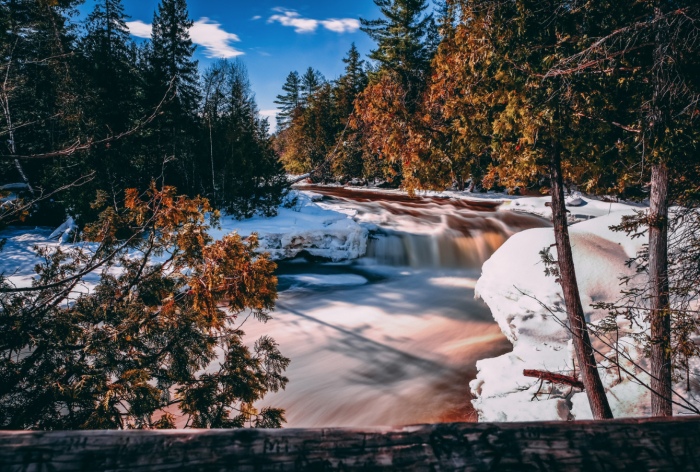 GoWaterfalling explains that Lower Tahquamenon Falls is part of:

…Tahquamenon Falls State Park on MI-123. It is on the map and is easy to find, but it is a bit out of the way. There are three sections to the park: the Upper Falls, the Lower Falls, and the rivermouth campsite.

The lower falls are a series of cascades, that go around a small island, with several drops in the 10 foot range. You can rent a boat and go to the island, and walk around and see more views of the falls. There is a campground near the lower falls, and a concession stand where you can buy ice cream, drinks and souvenirs.

There is a trail between the upper and the lower falls. It is 4+ miles, with some ups and downs, mostly through woods well above the river. The river is quite calm between the two falls, and there is not much rock to see.

I know that I just featured a photo from Dan of the Upper Falls, but this one from Saturday was too good to pass up! See more in Dan’s Michigan’s Upper Peninsula gallery on Flickr!

Sunrise at Tahquamenon by Dan Gaken

Here’s a stunning moment from Tahquamenon Falls that Dan captured this weekend.  More from Dan in his Michigan’s Upper Peninsula gallery on Flickr!

The Tahquamenon Falls State Park page says that the Upper Tahquamenon Falls are one of the largest waterfalls east of the Mississippi. At more than 200 feet across with a drop of nearly 50 feet, the falls have a flow rate that can exceed 50,000 gallons per second!

View the photo background bigtacular, see more in Erin’s slideshow and check out Tahquamenon Falls: Take 4 on her blog for some details about her latest visit. 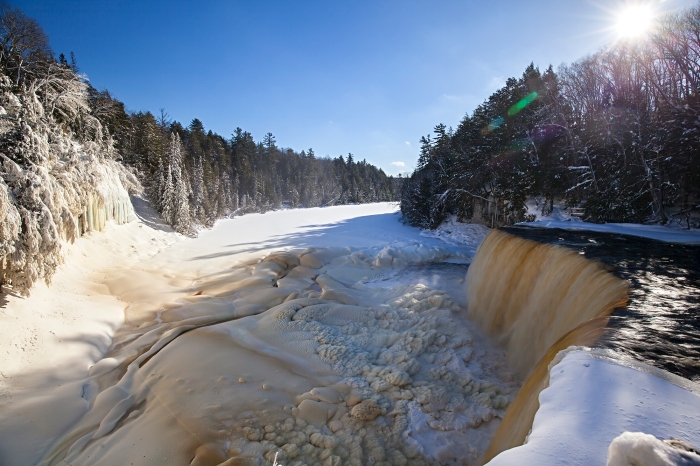 Beautiful shot from Michigan’s largest waterfall, Tahquamenon Falls. Click that link for more – the next photo down is the same angle without ice & snow!

View Ali’s photo background bigtacular and see more in his slideshow. (warning – there’s a couple of AMAZING bug closeups in there too!)

Gorgeous photo from after dark at Tahquamenon Falls State Park.

Lots more about Tahquamenon Falls on Michigan in Pictures.

Julie got this cool shot of the Tahquamenon Falls throwing off winter’s grip at the beginning of the month. Now it looks like winter is going to strike back. Via the Detroit news and Sara Schultz, meteorologist with the National Weather Service in White Lake, a winter storm is arriving today:

“We’re looking at the heaviest snowfall north of Saginaw, in the Thumb area and then to the north and west of that, and then of course the lower northern Michigan areas, where they could see six-plus inches of snow.”

A winter storm watch will be in effect Wednesday morning through early Thursday evening for areas north of Interstate 69, Schultz said.

Schultz cautioned that the forecast remains flexible as the storm enters the state. “That rain/snow line along I-69, if it shifts just a little it could throw off everything,” she said. 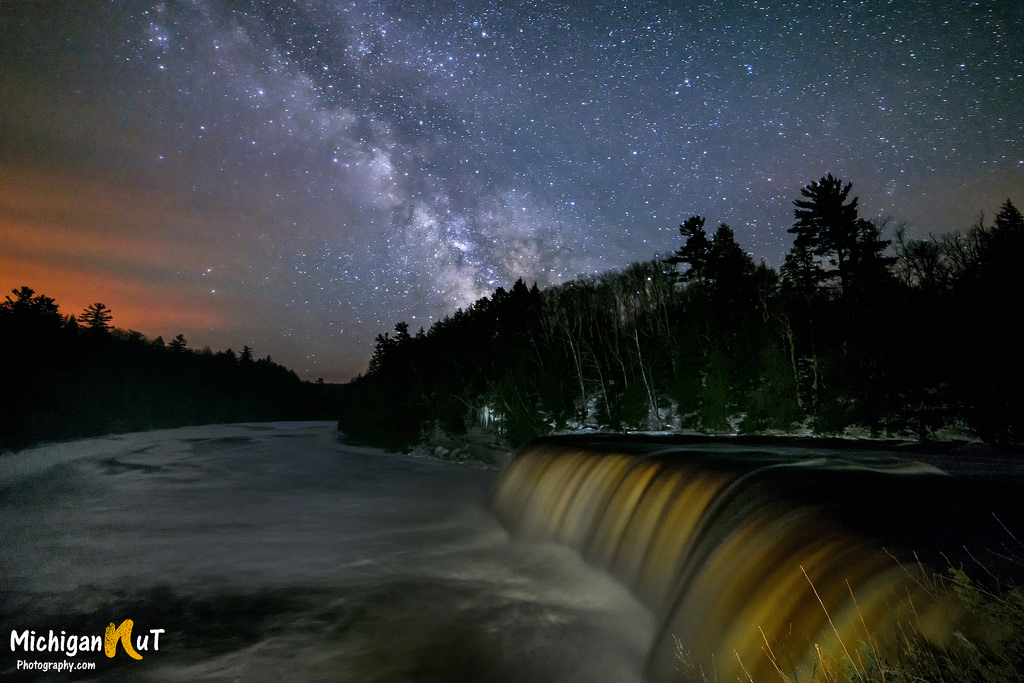 Tahquamenon Falls State Park encompasses close to 50,000 acres stretching over 13 miles. Most of this is undeveloped woodland without roads, buildings or power lines. The centerpiece of the park, and the very reason for its existence, is the Tahquamenon River with its waterfalls. The Upper Falls is one the largest waterfalls east of the Mississippi. It has a drop of nearly 50 feet and is more than 200 feet across. A maximum flow of more than 50,000 gallons of water per second has been recorded cascading over these falls.

…This is the land of Longfellow’s Hiawatha – “by the rushing Tahquamenaw” Hiawatha built his canoe. Long before the white man set eyes on the river, the abundance of fish in its waters and animals along its shores attracted the Ojibwa Indians, who camped, farmed, fished and trapped along its banks. In the late 1800’s came the lumber barons and the river carried their logs by the millions to the mills. Lumberjacks, who harvested the tall timber, were among the first permanent white settlers in the area.

Rising from springs north of McMillan, the Tahquamenon River drains the watershed of an area of more than 790 square miles. From its source, it meanders 94 miles before emptying into Whitefish Bay. The amber color of the water is caused by tannins leached from the Cedar, Spruce and Hemlock in the swamps drained by the river. The extremely soft water churned by the action of the falls causes the large amounts of foam, which has been the trademark of the Tahquamenon since the days of the voyager.

View John’s photo bigger, follow him at Michigan Nut Photography on Facebook, and settle back for his Michigan Waterfalls slideshow.

I wrote that the actual moment of the solstice was 11:48 PM last night, but it’s actually TONIGHT!  Anyway, here’s a simply gorgeous photo from the 2013 winter solstice at Tahquamenon Falls to kick off the shortest day of the year. I hope you can fit everything in and get a great start to your week!

View twurdemann’s incredible ten-second exposure bigger and see more including some more shots of the dramatically different scene at the Falls in 2013 in his winter slideshow.

Lots more Tahquamenon Falls and more about the winter solstice on Michigan in Pictures!