SUP Yo?!, photo by Rudy Malmquist

I’ve been doing a lot of stand-up paddleboarding this summer on Grand Traverse Bay courtesy my friend Michael who owns The River of Traverse City. I have been pleasantly surprised at how much fun it is and also what a great workout it is.

In a couple of weeks Traverse City will host the TC Waterman. It takes place on Saturday, August 17th and is the largest paddle board event in the Midwest and also the site of the 2013 Great Lakes Regional Championship. In addition to a variety of races and skills challenges for all ages and skill levels, the event features 50 booths by local and national SUP organizations and companies, free clinics, seminars, and demonstrations. The weekend also features two events from Porterhouse Productions: Paella in the Park on Friday (wine, music & paella) and the Great Wakes Festival Saturday (water-themed activities, organizations, music & fun).

Check this photo out background bigtacular and see more in Rudy’s slideshow.

I have to confess: I am a huge fan of Michael Moore. One of the reasons has nothing to do with politics or his films. Almost 10 years ago, Michael did something that I didn’t think possible. He galvanized support, spent and raised money and brainstormed to lead a vast & diverse army of volunteers to restore the theater of my childhood, the State Theatre in Traverse City. While the successful and wildly entertaining Traverse City Film Festival has been a huge driver of the theater’s comeback, many overlook how his dedication to the movie-going experience created a theater that hundreds of people every day enjoy as part of a vibrant downtown experience. Of course after the Motion Picture Association of America tapped the State as #1 on their list of the best theaters in America, that number has probably gone down.

All this is a rather long-winded way of introducing Michael’s latest Traverse City cause, restoring the empty Con Foster Museum as a new theater – the Bijou By the Bay.  The story starts with Conrad “Con” Foster:

Manager of the State Theatre when it was originally known at the Lyric Theatre, he first arrived in Traverse City in July of 1917 as an employee of Fitzpatrick-McElroy Company to run and operate the Lyric. A true showman with a passion for the movies, one of the first things he did upon arrival was install a “newer and brighter” screen as part of his commitment to make the Lyric “equal to any motion picture house in the state.” It is this commitment to presentation the State Theatre continues today.

Born in Boston, Massachusetts on March 21, 1875, Foster was not a Traverse City native, but the community embraced him and he quickly made the area his home. After less than a year in Traverse City, Fitzpatrick-McElroy transferred him to a new theater post in Wisconsin, and Foster spent the next six years heartsick, petitioning the company to bring him back.

Foster’s pleas were answered in April 1924 when he returned to Traverse City to resume his post at the Lyric. He placed an ad in the Record Eagle expressing his delight, writing:

“My ambition has been to return to Traverse City, since they made me leave, to operate what I think is the most beautiful theater in our circuit. I have come to love the city, its good natured folks, and have often told my wife that Traverse City is the place to make a home. So it is with great pleasure that I can announce that my longings have been realized and I have again been transferred to the best little city in the world.”

Over the course of the next sixteen years, Foster worked tirelessly to make the Lyric the best theater in Michigan. Ahead of his time, in the spring of 1929 Foster had the foresight to bring “talkies” to the Lyric, installing the latest state-of-the-art sound technology and film projectors in Traverse City. At that time, sound technician Walter Beck claimed this was the smallest city in the country, to his knowledge, to have installed this modern equipment.

Foster’s impact extended far beyond his movie house and into all aspects of civic life. He encouraged and promoted Cherry Festival programs, patriotic presentations and educational speakers. He knew the Lyric was more than a just movie theater, but an important gathering space for the community. Serving as head of the Chamber of Commerce, City Commissioner and even Mayor, Foster was committed to serving his community.

Foster managed the Lyric until he died suddenly of a heart attack in 1940. The city mourned his loss, with a tribute in the Record Eagle claiming, “When Con Foster died this morning a part of Traverse City died with him, not a physical part, but a spiritual part.” Downtown businesses closed for his funeral and the Lyric reopened afterward to screen Gone with the Wind.

Foster also created Clinch Park, which is home to the proposed theatre. Find out more and how to donate at Bijou By the Bay. 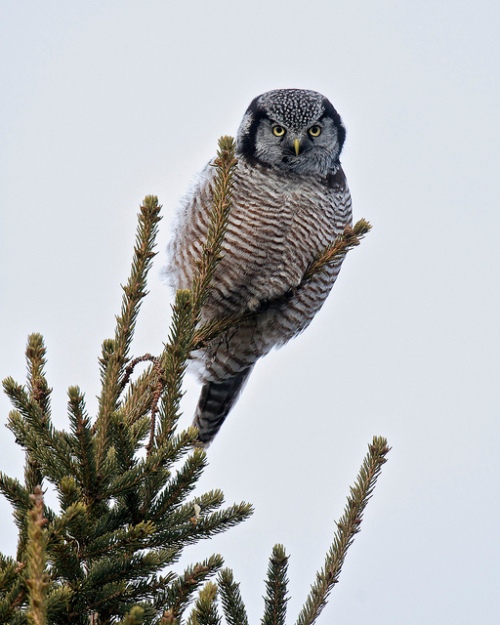 Northwestern Michigan College here in Traverse City has just under 5000 students and is turning from a 2 year to a 4 year college. As part of this, they will be adding athletics again, and that means they need a mascot. So this week they selected a new one – the NMC Hawk Owls.

With a weight of half a pound to a pound, a length of just 14-16″ and a wingspan of just under 2 1/2 feet, the Northern Hawk Owl appears to be the perfect mascot:

Hunting & Food: Takes mainly small mammals as prey, mostly lemmings and voles. Will also take birds, frogs and occasionally fish. Prey weight is normally below 70g. Hunts by searching from a lookout, then quickly flying to swoop down on prey. Has been observed hovering also.

Breeding: Male advertises potential nest sites, and the female selects one. Nests in Cavities on top of broken trunks, natural tree hollows, abandoned holes of large woodpeckers. Will accept nest boxes, and occasionally use a stick nest of a larger bird. Laying normally occurs in April and the first half of May. Clutch sizes are usually between 5 and 13 eggs, each 36-44mm  x 29-34.4mm. Eggs are laid at 1-2 day intervals, and incubated by the female alone for 25-30 days. During this time, the male feeds the female.

The Northern Hawk-Owl has been said to resemble a hawk in appearance and in behavior. In North America, its appearance in flight is often considered similar to a Cooper’s Hawk (Accipiter cooperii). It has been suggested that this may be because the Hawk-Owl may partially fill an important diurnal niche similar to that of day hunters such as hawks.

…Northern Hawk Owls are unevenly distributed and highly variable throughout the boreal forest. They live mostly in open coniferous forests, or coniferous forests mixed with deciduous species such as larch, birch, poplar, and willow. They are found in muskegs, clearings, swamp valleys, meadows, or recently burnt areas, and generally avoid dense spruce-fir forests. Winter habitat is usually the same as breeding habitat.

Northern Hawk Owl at All About Birds adds that their International conservation status is Least Concern and some cool facts:

Grabbing a mouse through a foot of snow? That’s a seriously scary predator … at least if you’re the prey. Click all those links to explore photos, calls and more about these tiny terrors.

Check this photo from Chippewa County out on black and see more including another shot of this owl in twurdemann’s Birds slideshow.

More owls (and also apparently words that end with owl) on Michigan in Pictures.