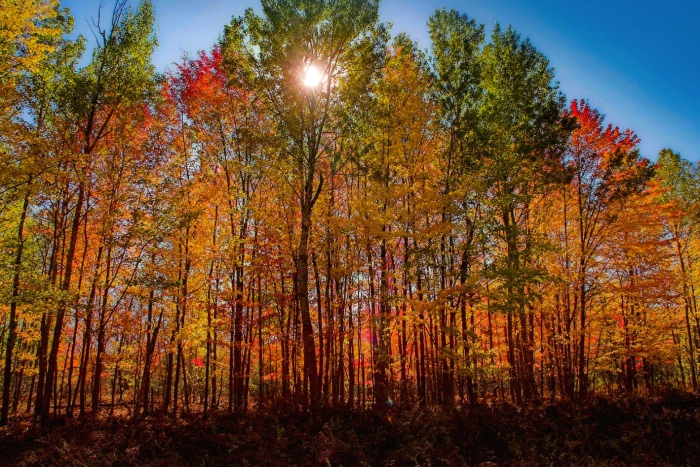 Sunlight through the autumn trees by T P Mann

Fall color remains in full swing across much of Michigan. Here’s hoping you have a chance to enjoy it before it’s gone!

T P took this photo way back on October 20, 2007. See more in his Michigan Autumn Colors gallery on Flickr.

Tunnel of Trees by Mark Smith

Here’s a great shot from Mark showing the current state of color on M-22 on the Leelanau Peninsula. You can check out a current map of Michigan fall color along with some photos on mLive.

This weekend will be amazing for fall color so get yourself up or outside this weekend!

Head over to downstreamer on Flickr for the latest from Mark. 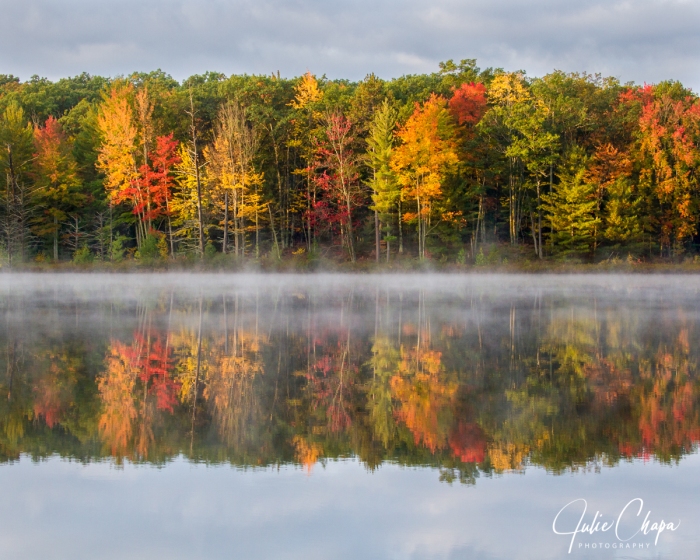 In their excellent article on The Science of Fall Color, the US Forest Service explains the role of the weather in the annual seasonal show:

The amount and brilliance of the colors that develop in any particular autumn season are related to weather conditions that occur before and during the time the chlorophyll in the leaves is dwindling. Temperature and moisture are the main influences.

A succession of warm, sunny days and cool, crisp but not freezing nights seems to bring about the most spectacular color displays. During these days, lots of sugars are produced in the leaf but the cool nights and the gradual closing of veins going into the leaf prevent these sugars from moving out. These conditions – lots of sugar and light – spur production of the brilliant anthocyanin pigments, which tint reds, purples, and crimson. Because carotenoids are always present in leaves, the yellow and gold colors remain fairly constant from year to year.

The amount of moisture in the soil also affects autumn colors. Like the weather, soil moisture varies greatly from year to year. The countless combinations of these two highly variable factors assure that no two autumns can be exactly alike. A late spring, or a severe summer drought, can delay the onset of fall color by a few weeks. A warm period during fall will also lower the intensity of autumn colors. A warm wet spring, favorable summer weather, and warm sunny fall days with cool nights should produce the most brilliant autumn colors.

Julie took this photo at a small lake near Fife Lake back in 2014. See more in her Michigan gallery & follow Julie Chapa Photography on Facebook. 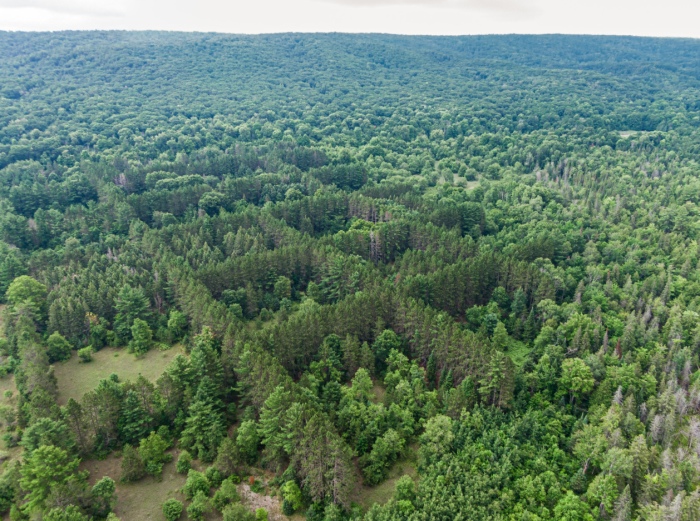 Tic Tac Toe in the Woods by Laurent Fady

One of the nice things about drone photos is that they can reveal cool things that are lurking just beyond our perception. Laurent shares that he asked his brother who “makes” trees for a living as a biology engineer, and his brother said that it could be an effort to mark growing areas for growers.

Laurent says that the next time he drives by, he’ll investigate. Stay tuned & see more in his Aerial Photos of Northern Michigan gallery on Flickr & follow Laurent Fady Photography on Facebook! 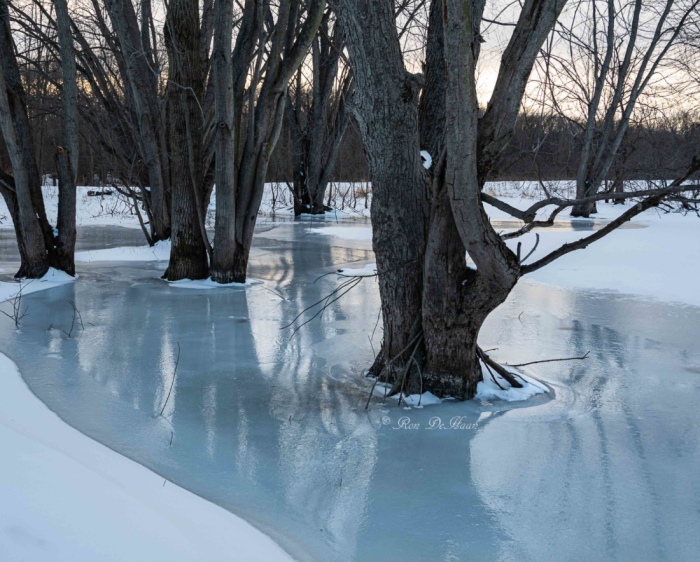 Ron says that the only way this ice could have been smoother is with a Zamboni! Head over to his Flickr for more!

Here’s a lovely shot from the Maple River State Game Area which:

…is mid-Michigan’s largest contiguous wetland complex, an extensive area of floodplains, lowlands, and marshes along the Maple River that begins in Gratiot County and spills into Clinton County … Hiking opportunities are available in the East Unit, however. Straddling US-27, the East Unit features pools and diked-in ponds that serve as the water basin for the Maple River and attract migrating birds. Hiking along dikes is easy and the spectacular congregations of birds among the cattails in the warm glows of a late afternoon sun makes this trail system scenic and interesting for families and anybody who enjoys birding.

…Wildlife can be viewed practically year-round in the game area. Spring viewing from March through May is excellent as thousands of ducks, geese, and swans use the wetlands as a stopover on their migration to northern breeding grounds. Throughout the summer herons are a common sight in the area while the observant or those who pack along binoculars might spot bald eagles or ospreys perched on dead snags.

Fantasy is a necessary ingredient in living, it’s a way of looking at life through the wrong end of a telescope, and that enables you to laugh at life’s realities.
-Dr. Seuss

Fitting photo from southeast Michigan as we head into a weekend where temps are expected to climb into the 50s and not drop below freezing in Detroit until January 27th!

View Carolyn’s photo on Instagram, follow her @carolynchip and keep up with her photos on her 500px.

Tom says they were out playing in the first big snow of the year. View his photo bigger and see more in his Black & White slideshow.

The Science of Color in Autumn Leaves from the United States National Arboretum is such an excellent explanation of the science behind the magic of Michigan’s fall color show that I try and share it every year:

The process that starts the cascade of events that result in fall color is actually a growth process. In late summer or early autumn, the days begin to get shorter, and nights are longer. Like most plants, deciduous trees and shrubs are rather sensitive to length of the dark period each day. When nights reach a threshold value and are long enough, the cells near the juncture of the leaf and the stem divide rapidly, but they do not expand. This abscission layer is a corky layer of cells that slowly begins to block transport of materials such as carbohydrates from the leaf to the branch. It also blocks the flow of minerals from the roots into the leaves. Because the starting time of the whole process is dependent on night length, fall colors appear at about the same time each year in a given location, whether temperatures are cooler or warmer than normal.

During the growing season, chlorophyll is replaced constantly in the leaves. Chlorophyll breaks down with exposure to light in the same way that colored paper fades in sunlight. The leaves must manufacture new chlorophyll to replace chlorophyll that is lost in this way. In autumn, when the connection between the leaf and the rest of the plant begins to be blocked off, the production of chlorophyll slows and then stops. In a relatively short time period, the chlorophyll disappears completely.

This is when autumn colors are revealed. Chlorophyll normally masks the yellow pigments known as xanthophylls and the orange pigments called carotenoids — both then become visible when the green chlorophyll is gone. These colors are present in the leaf throughout the growing season. Red and purple pigments come from anthocyanins. In the fall anthocyanins are manufactured from the sugars that are trapped in the leaf. In most plants anthocyanins are typically not present during the growing season.

As autumn progresses, the cells in the abscission layer become more dry and corky. The connections between cells become weakened, and the leaves break off with time. Many trees and shrubs lose their leaves when they are still very colorful. Some plants retain a great deal of their foliage through much of the winter, but the leaves do not retain their color for long. Like chlorophyll, the other pigments eventually break down in light or when they are frozen. The only pigments that remain are tannins, which are brown.

The explain that because the starting time of the whole process is dependent on night length, fall colors appear at more or less the same time every year and are not overly dependent on temperature, rainfall or other factors, other than the fact that weather can shorten or prolong the show by stripping leaves from trees.

Click through to the US Arboretum for more and also see Fall & Fuit from the Science of Color!