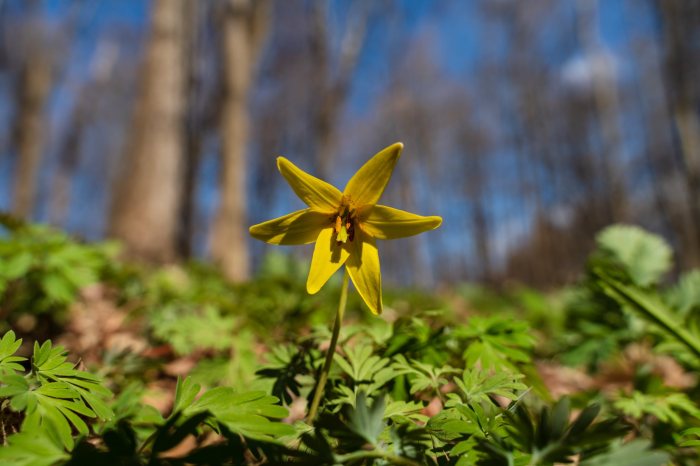 The trout lily derives its name due to the resemblance of its mottled leaves to the coloring on brook trout. This 4-10″ tall wildflower is one of the earliest to bloom in Michigan and is also known as Adder’s Tongue and Dogtooth Violet. Edible Wild Food’s entry for trout lily (Erythronium americanum) says:

Trout Lily grows in huge colonies that can completely cover a forest floor. The colonies can be hundreds of years old and takes a long time to grow to such a size. Its bulbs are sterile up to about the seventh year and then it produces only one leaf and no flowers. When they mature one plant will grow two leaves and one, beautiful yellow flower. The colony spreads mostly by runners and less importantly by seed. Trout lilies have a symbiotic relationship with ants known as myrmecochory. This means that they exchange a lipid-rich appendage on their seeds in return for an ant seed dispersal that spreads the colony and protects the seeds from predation. This plant is a beautiful spring ephemeral meaning it is short-lived in the spring only.

You can see this photo & more from Bill in our Michigan in Pictures group on Facebook.

Happy May Day from a Dutchman, photo by Dale Devries

Happy May Day everyone!

Dale took this on May 1, 2017 after a much warmer spring and writes: Took a walk to the Rosy Mound (sand dune) just south of Grand Haven this morning, and found many Dutchman’s Breeches along the trail! I was looking for red trillium, but found none of them. The anatomy of this flower is quite amazing, with the stamens and pistil hanging down.

View Dale’s photo background big and and see more in his massive The Best of West Lake album.

Get your desktop ready with lots more Spring wallpaper on Michigan in Pictures!

The Michigan DNR relates that Michigan’s state wildflower, the Dwarf Lake Iris (Iris lacustris): grows nowhere else but in the Great Lakes region, and most within Michigan’s boundaries:

In Michigan, Dwarf Lake Iris is especially concentrated along certain stretches of the northern Great Lakes shoreline, where it may occur for miles, interrupted only by habitat destruction, degradation, or unsuitable habitat such as rocky points or marshy bays.

Dwarf Lake Iris usually occurs close to the Great Lakes shores on sand or in thin soil over limestone rich gravel or bedrock. It tolerates full sun to near complete shade, but flowers mostly in semi open habitats. These areas can be very long and narrow strips bordering the high water line, or large flat expanses located behind the open dunes of the Great Lakes shoreline. Many iris locations are on old beach ridges of former shores of the Great Lakes. Fluctuating water levels of the Great Lakes play a vital role in opening up new habitat for Dwarf Lake Iris. During high water years, trees and shrubs along the shoreline may be flooded out. This flooding may open up patches within the forest where the Dwarf Lake Iris may spread. It is usually found growing under White Cedar, although White Spruce, Balsam Fir, and Aspen are also frequently present.

…”Lacustris” translates literally to mean “of lakes” and refers to where this beautiful iris grows. Dwarf Lake Iris was first found on Mackinac Island in 1810 by Thomas Nuttall, a renowned naturalist and explorer. Nuttall reached Mackinac Island after travelling from Detroit by canoe with French Canadian voyagers and the surveyor for the Michigan Territory. At least 1/3 of the species that Nuttall reported from the Great Lakes were new to science.

Read on for much more.

Mark took this along the hiking trail in Riverview Park in St. Joseph. View it bigger and see more in his Michigan – Color slideshow.

I love old books, and was happy to find Wild Flowers Worth Knowing by Neltje Blanchan, a 1917 book that is available online through Project Gutenberg. The entry for Yellow Adder’s Tongue; Trout Lily; Dog-tooth “Violet” (Erythronium americanum) is a good example of the descriptive & endearing turns of phrase you often find in books from another age:

Flower – Solitary, pale russet yellow, rarely tinged with purple, slightly fragrant, 1 to 2 in. long, nodding from the summit of a root-stalk 6 to 12 in, high, or about as tall as the leaves. Perianth bell-shaped, of 6 petal-like, distinct segments, spreading at tips, dark spotted within; 6 stamens; the club-shaped style with 3 short, stigmatic ridges. Leaves: 2, unequal, grayish green, mottled and streaked with brown or all green, oblong, 3 to 8 in. long, narrowing into clasping petioles.

Distribution – Nova Scotia to Florida, westward to the Mississippi.

Colonies of these dainty little lilies, that so often grow beside leaping brooks where and when the trout hide, justify at least one of their names; but they have nothing in common with the violet or a dog’s tooth. Their faint fragrance rather suggests a tulip; and as for the bulb, which in some of the lily-kin has toothlike scales, it is in this case a smooth, egg-shaped corm, producing little round offsets from its base. Much fault is also found with another name on the plea that the curiously mottled and delicately pencilled leaves bring to mind, not a snake’s tongue, but its skin, as they surely do. Whoever sees the sharp purplish point of a young plant darting above ground in earliest spring, however, at once sees the fitting application of adder’s tongue. But how few recognize their plant friends at all seasons of the year!

Every one must have noticed the abundance of low-growing spring flowers in deciduous woodlands, where, later in the year, after the leaves overhead cast a heavy shade, so few blossoms are to be found, because their light is seriously diminished. The thrifty adder’s tongue, by laying up nourishment in its storeroom underground through the winter, is ready to send its leaves and flower upward to take advantage of the sunlight the still naked trees do not intercept, just as soon as the ground thaws.

View Heather’s photo background bigtacular and see more in her Up Close slideshow.

Many more Michigan flowers and more Spring wallpaper on Michigan in Pictures!

One of the many signs of spring in Michigan is the appearance of the endangered trillium flower in the woods. In Plant Focus: Trillium, George Papadelis of the Michigan Gardener writes that for hundreds of years, this plant and its name have been used to symbolize purity, simplicity, elegance, and beauty.

In Ohio, where all 88 counties have masses of wild trillium, it was selected as the state’s official wildflower. Its flowers have twice graced a U.S. postage stamp. Even our Canadian friends across the bridge have declared white trillium (Trillium grandiflorum) the official provincial flower of Ontario. Other parts of the world share our passionate admiration for this plant. In Europe, where trilliums are not found in nature, gardeners dedicate vast amounts of time and money acquiring them, especially rare species. In Japan, a cult-like interest has developed towards trillium.

The most readily available species is Trillium grandiflorum or white wake-robin. This has large, pure white flowers up to 5 inches across. These develop in great abundance throughout the northeastern U.S. Its flowers usually fade to a dull pink and sometimes red. Trillium erectum is a much more diverse species with flowers ranging from red to purple to yellow-green and beige. It also grows wild in the Northeast and Michigan. Trillium luteum is the most common yellow species. It originates from areas around eastern Tennessee. One of its most notable features is the beautiful dark green leaves decorated with pale green markings. The flowers are relatively small. Trillium recurvatum bears maroon-purple to clear yellow flowers with strongly curved petals.

Read on for information about how to legally grow trillium.

Check this out background bigtacular, check out his Spring slideshow and see more from Steve on Michigan in Pictures. 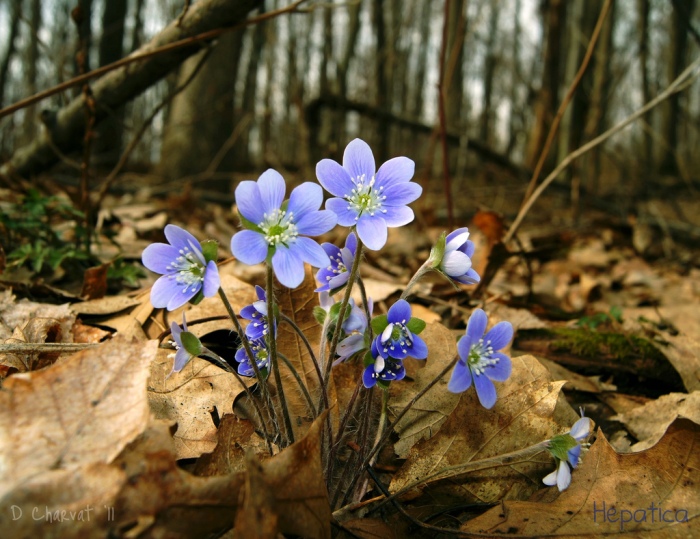 Wikipedia says that Hepatica was named for its leaves, which, like the human liver (Greek hepar), have three lobes. It was once used as a medicinal herb. Owing to the doctrine of signatures, the plant was thought an effective treatment for liver disorders. Although poisonous in large doses, the leaves and flowers may be used as an astringent, demulcent for slow-healing injuries and as a diuretic.

Check this out background bigalicious and in d charvat’s Michigan wildflowers slideshow.