The Keweenaw Road Commission shared last week that they’ve recorded over 300 inches of snow this winter. The 25 feet of snow is about 6 feet more than normal. While that’s definitely a whole lot, it’s 356 inches of snow recorded in the winter of 1978–79.

While one of the names for Tahquamenon Falls is “Root Beer Falls, Travel the Mitten shares another waterfall with the same name, Root Beer Falls on Planter Creek:

Few Michigan waterfalls are as easy to visit as Root Beer Falls in Wakefield. This small waterfall can be viewed from the side of the road, and getting a closer view only requires a walk of a few hundred yards. If you’re in the area to see other waterfalls or headed up to the western end of the Porcupine Mountains this is a waterfall you won’t want to miss.

Planter Creek flows under M-28 a few blocks from Sunday Lake. Shortly after passing under the highway it cascades over a small rock ridge, forming a waterfall in a beautiful forested setting. The sudden drop of around six feet that forms this waterfall is a stark contrast to the otherwise quiet setting here as the creek winds its way through the woods.

Dover Creek tumbles overs a series of falls on its way down to Torch Lake. Two of the falls are around 20 feet high, and the last is a 50 foot drop, which is spectacular when the water is flowing. Unfortunately these falls are often nearly dry in the summer.

There are three falls 15 feet or higher on a half mile stretch of Dover Creek, plus a couple of smaller drops. In the spring time, or after some good rains, these waterfalls are very impressive. Unfortunately the creek has a very small watershed, and the falls are often reduced to trickles.

The three main drops are usually referred to as the upper, middle and lower falls. The upper falls is around 20 feet high. The water spills over an irregularly shaped cliff into a small gorge.

Get directions & info about this Keweenaw series of waterfalls at GoWaterfalling.

See more in Eric’s Personal Favorites gallery on Flickr and for sure check out his website to view & buy his prints! 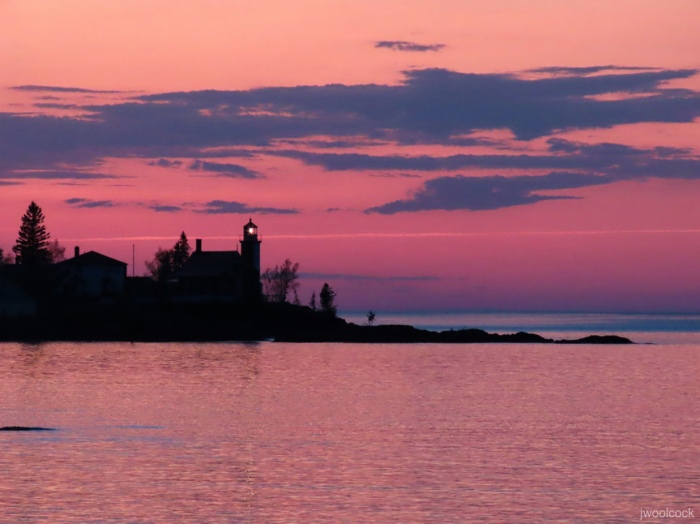 The Beacon by James Woolcock

James caught an awesome sunset at the Eagle Harbor Lighthouse on the Keweenaw Peninsula. Head over to his Flickr for more!

You can read about Eagle Harbor Lighthouse & see another angle on Michigan in Pictures.

This spring has been big for fans of the aurora borealis. Shelby took created this photo of five, 1-min tracked shots blended with an untracked foreground shot the night of March 13/14th in Copper Harbor. It shows a phenomenon I’d never heard of, a Strong Thermal Emission Velocity Enhancement aka STEVE about which Space.com says (in part):

A typical aurora — sometimes called the northern lights or the southern lights, depending on the hemisphere in which it’s located — occurs when charged particles from the sun interact with Earth’s oxygen and nitrogen molecules. This interaction excites the molecules and causes them to glow.

But STEVE, formally known as Strong Thermal Emission Velocity Enhancement, is different. In the Northern Hemisphere, the phenomenon is visible from areas farther south than a typical aurora, and it looks like a ribbon of pink or mauve light. Sometimes, STEVE even has a “picket fence” appearance, with green columns of light passing through the ribbon. Auroras, by contrast, usually are shimmering green ribbons.

…The new study examined satellite data gathered above STEVE events in April 2008 and May 2016. The measurements included information about Earth’s magnetic and electrical fields in the magnetosphere, the region of Earth’s atmosphere where the planet’s magnetic field is stronger than any influence coming from the sun. Then, scientists compared the satellites’ findings with amateur photos of STEVE taken from the ground at the same time.

When STEVE was on display, the study authors realized, energetic electrons were pouring into Earth’s ionosphere, the layer of the planet’s atmosphere where atoms lose electrons due to solar and cosmic radiation. The friction that flood creates heats particles, which creates the pinkish glow, almost like an incandescent light bulb.

Satellite information further revealed how the “picket fence” aspect of STEVE develops. The data revealed waves moving from Earth’s magnetosphere to the ionosphere. In this region, the waves can both energize electrons and move them out of the magnetosphere, creating the picket-fence appearance, which happens simultaneously in the Northern and Southern hemispheres. 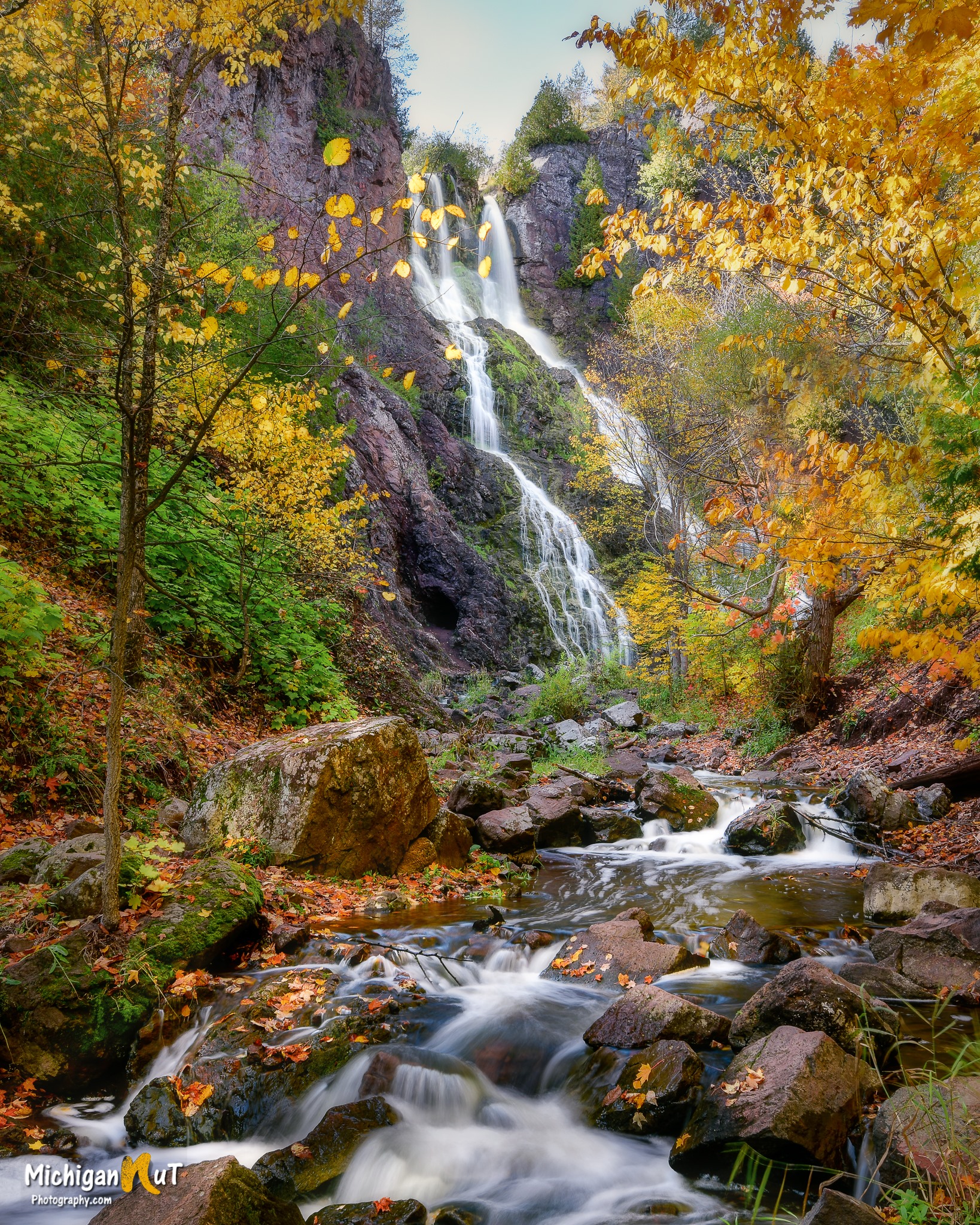 Waterfalls of the Keweenaw says that Houghton Douglass Falls on Hammell Creek is:

A wildly tall and impressive waterfall, Douglass Houghton Falls was once a popular destination for locals and Michigan Tech students alike. Crumbling cliff walls and numerous accidents, many of them fatal, pushed the land owner to cut off access. While the falls are still reachable by following Hammell Creek upstream from Lake Linden, the danger of a careless visit cannot be understated.

This waterfall is well over a hundred feet with several plunges bouncing off the sharp, volcanic rock. Steep walls make it difficult to reach the small drops in the meadow above, but a great view down towards Torch Lake can be made down the green creek valley. A small exploratory shaft is drilled into the side of the falls only a few feet above the creek. While it’s hard to reach and dangerous to explore, this waterfall is one of the highlights of the Copper Country.

More about how to visit at Waterfalls of the Keweenaw.

John took this pic back in October and notes that at 100′ feet, Houghton Douglass is Michigan’s tallest waterfalls. You can read the comments on the pic right here, follow the Michigan Nut Photography Facebook page for more, and view & purchase photos at michigannutphotography.com!

WOOD-TV has a report on the high winds that ripped Michigan this weekend:

…According to the Consumer’s Energy power outage map, 27,704 were without power across the state as of 5:20 a.m. Monday.

Norton Shores was tops with gusts of 68 MPH, and it was blowing hard in Jackson (64), Grand Rapids (63) & Lansing (54). The Detroit Metro Airport in Romulus recorded a 61 MPH gust as well.

Kevin took this photo of waves on Lake Superior battering the Eagle Harbor Lighthouse on the Keweenaw Peninsula last November. See more in his Lake Superior photo gallery on Flickr.

Potawatomi Falls on the Black River by Tom Clark

Waterfalls of the Keweenaw entry for Potawatomi Falls says in part:

A short distance below Great Conglomerate Falls is an awkward duplicate: Potawatomi Falls. Like its twin, Potawatomi is a split drop over a dome of conglomerate rock that creates two tall, curving waterfalls. However, this one is not split evenly. Much of the water is pushed to the eastern bank by an uneven riverbed to create a wide and multi-tiered drop. A few small streams converge for the other side and make for a smaller, but more direct, plunge.

As a bonus, it’s walkable to another beautiful waterfall, Gorge Falls.

Tom took this last month and you can see lots more in his excellent Waterfalls, Rivers & Streams gallery on Flickr & definitely follow Tom Clark Photography on Facebook for more great pics from his travels!

Here’s a stunning Upper Peninsula vista taken the other day from Brockway Mountain on the Keweenaw Peninsula which CopperHarbor.org says:

…is the highest paved road between the Rockies and the Alleghenies. The drive is 10 miles long and has many pull-offs enabling visitors to stop and take in the scenery. There are two nature preserves along the drive that are worth visiting too. At the top, 735 feet above Copper Harbor, you will find a breathtaking 360° view of Lake Superior, the surrounding woodlands and inland lakes. On a clear day you can see Isle Royale about 50 miles away!

mLive shared an update on Michigan’s fall color progression that says in part:

The frost and freezing temperatures for two or three days in a row last week have sparked the fall colors. A leaf’s nutrition supply is cut off from the main tree with a freeze. The underlying color pigments in the leaf then emerge for our fall splendor.

You can also check out Pure Michigan’s Interactive Fall Foliage Map & definitely check out past fall color on Michigan in Pictures from more cool photos including the science behind fall color!

Wu took this photo back in 2015 on US-41 US-41 near Copper Harbor on the UP’s Keweenaw Peninsula. See more on their Flickr!